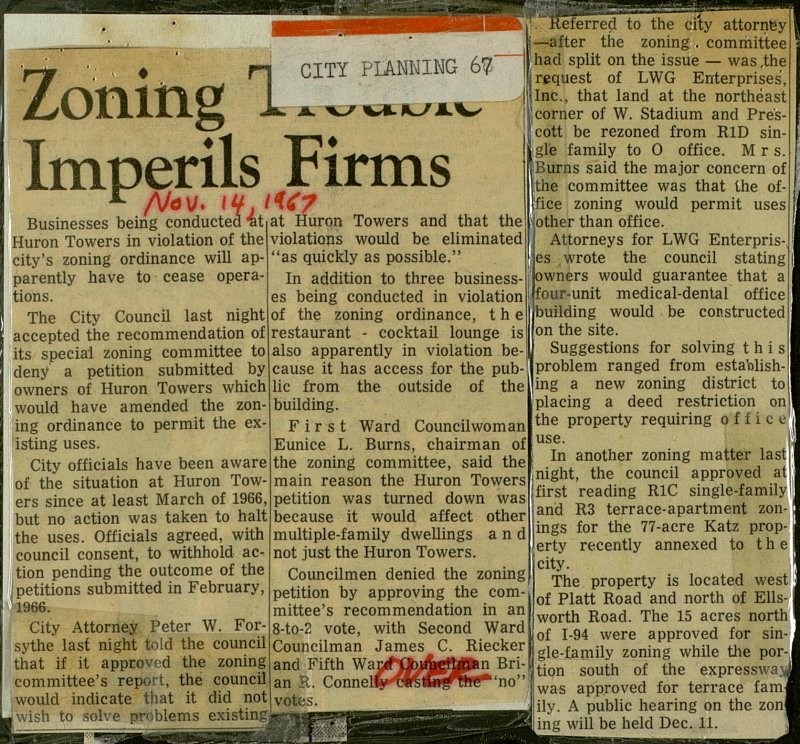 Businesses being conducted at Huron Towers in violation of the city's zoning ordinance will apparently have to cease operations. The City Council last night accepted the recommendation of its special zoning committee to deny a petition submitted by owners of Huron Towers which would have amended the zoning ordinance to permit the existing uses. City officials have been aware of the situation at Huron Towers since at least March of 1966, but no action was taken to halt the uses. Officials agreed, with council consent, to withhold action pending the outcome of the petitions submitted in February, 1966. City Attorney Peter W. Forsythe last night told the council that if it approvcd the zoning committee's report, the council would indicate that it did not wish to solve problems existing at Huron Towers and that the violations would be eliminated "as quickly as possible." In addition to three businesses being conducted in violation of the zoning ordinance, the restaurant-cocktail lounge is also apparently in violation because it has access for the public from the outside of the building. First Ward Councilwoman Eunice L. Burns, chairman of the zoning committee, said the main reason the Huron Towers petition was turned down was because it would affect other multiple-family dwellings and not just the Huron Towers. Councilmen denied the zoning petition by approving the committee's recommendation in an 8-to-2 vote, with Second Ward Councilman James C. Riecker and Fifth Ward Couijcilman Brian R. Connelly casting the "no" votes. Referred to the city attorney -- after the zoning committee had split on the issue -- was the request of LWG Enterprises, Inc., that land at the northeast corner of W. Stadium and Prescott be rezoned from R1D single family to O office. Mrs. Burns said the major concern of the committee was that the office zoning would permit uses other than office. Attorneys for LWG Enterprises wrote the council stating owners would guarantee that a four-unit medical-dental office building would be constructed on the site. Suggestions for solving this problem ranged from establishing a new zoning district to placing a deed restriction on the property requiring office use. In another zoning matter last night, the council approved at first reading R1C single-family and R3 terrace-apartment zonings for the 77-acre Katz property recently annexed to the city. The property is located west of Platt Road and north of Ellsworth Road. The 15 acres north of 1-94 were approved for single-family zoning while the portion south of the expressway was approved for family. A public hearing on the zoning will be held Dec. 11.