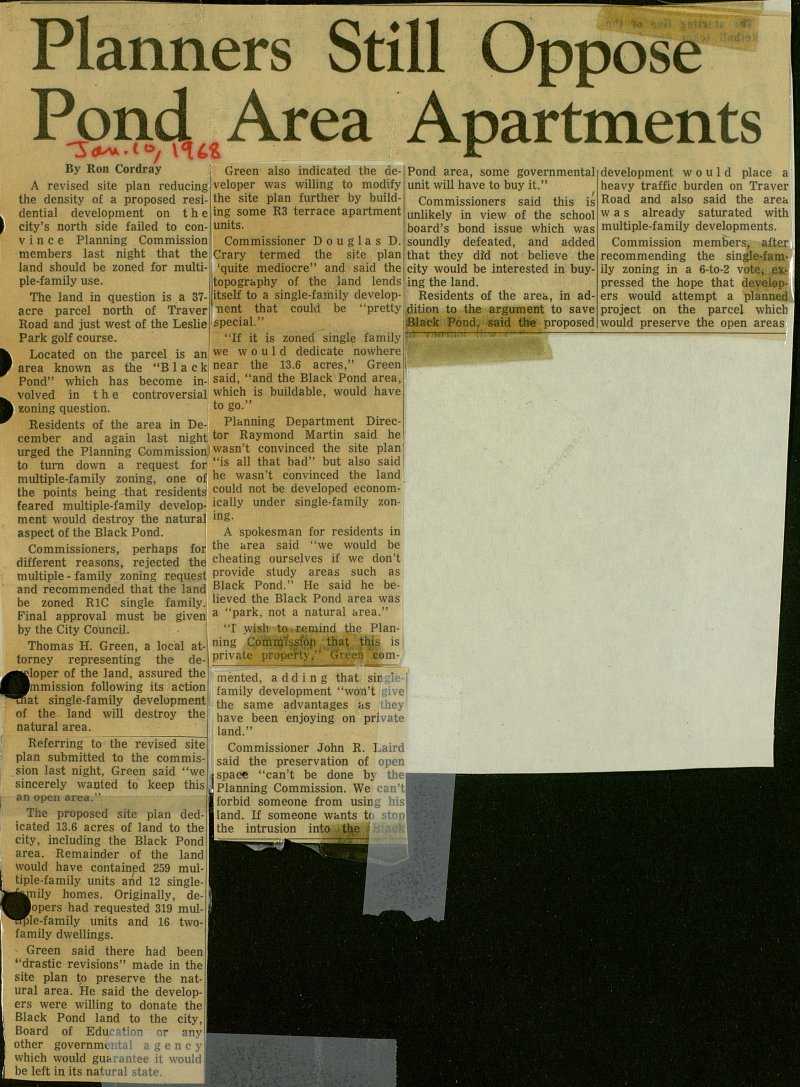 A revised site plan reducing the density of a proposed residential development on the city's north side failed to convince Planning Commission members last night that the land should be zoned for multiple-family use. The land in question is a 37acre parcel north of Traver Road and just west of the Leslie Park golf course. Located on the parcel is an area known as the "Black Pond" which has become involved in the controversial zoning question. Residents of the area in December and again last night urged the Planning Commissioa to turn down a request for multiple-family zoning, one of the points being that residents feared multiple-family development would destroy the natural aspect of the Black Pond. Commissioners, perhaps for different reasons, rejected the multiple-family zoning request and recommended that the land be zoned R1C single family. Final approval must be given by the City Council. Thomas H. Green, a local attorney representing the developer of the land, assured the Commission following its action that single-family development of the land will destroy the natural area. Referringto the revised site plan submitted to the commission last night, Green said "we sincerely wanted to keep this an open area." The proposcd site plan dedicated 13.6 acres of land to the city, including the Black Pond area. Remainder of the land would have contained 259 multiple-family units and 12 single-family homes. Originally, developers had requested 319 multiple-family units and 16 two-family dwellings. Green said there had been "drastic revisions" made in the site plan to preserve the natural area. He said the developers were willing to donate the Black Pond land to the city, Board of Education or any other governmcntal agency which would guarantee it would be left in its natural state. Green also indicated the developer was willing to modify the site plan further by building some R3 terrace apartment units. Commissioner Douglas D. Crary termed the site plan 'quite mediocre" and said the topography of the land lends itself to a single-family developnent that could be "pretty special." "If it is zoned single family we would dedicate nowhere near the 13.6 acres," Green said, "and the Black Pond area, which is buildable, would have to go." Planning Department Director Raymond Martin said he wasn't convinced the site plan "is all that bad" but also said he wasn't convinced the land could not be developed economically under single-family zoning. A spokesman for residents in the area said "we would be cheating ourselves if we don't provide study areas such as Black Pond." He said he believed the Black Pond area was a "park, not a natural area." 'I wish to remind the Planning Commission that this is private property," Green commented, adding that single-family development "won't give the same advantages as they have been enjoying on private land." Commissioner John R. Laird said the preservation of open space "can't be done by the Planning Commission. We can't forbid someone from using his land. If someone wants to stop the intrusion into the Black Pond area, some governmental unit will have to buy it." Commissioners said this is unlikely in view of the school board's bond issue which was soundly defeated, and added that they did not believe the city would be interested in buying the land. Residents of the area, in addition to the argument to save Black Pond, said the proposed development would place a heavy traffic burden on Traver Road and also said the area was already saturated with multiple-family developments. Commission members, after recommending the single-family zoning in a 6-to-2 vote, expressed the hope that developers would attempt a planned project on the parcel whicb would preserve the open areas.