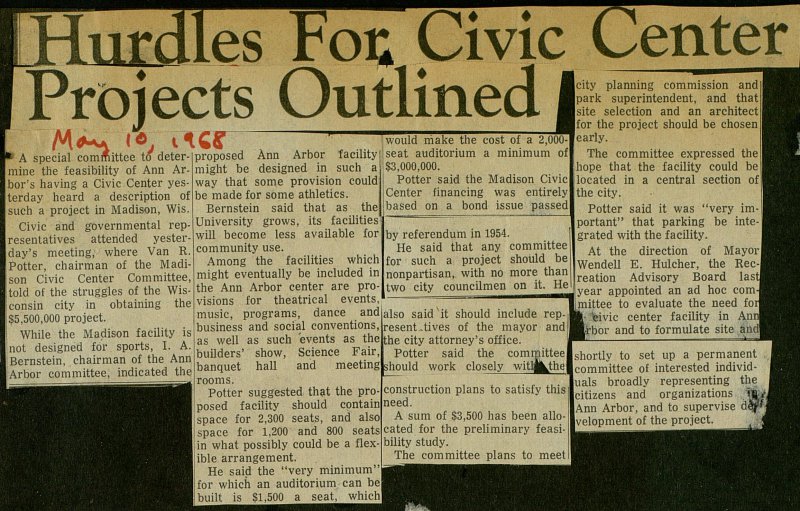 A special committee to determine the feasibility of Ann Arbor's having a Civic Center yesterday heard a description of such a project in Madison, Wis. Civic and governmental representatives attended yesterday's meeting, where Van R. Potter, chairman of the Madison Civic Center Committee, told of the struggles of the Wisconsin city in obtaining the $5,500,000 project. While the Madison facility is not designed for sports, I. A. Bernstein, chairman of the Ann Arbor committee, indicated the proposed Ann Arbor facility might be designed in such a way that some provision could be made for some athletics. Bernstein said that as the University grows, its facilities will become less available for community use. Among the facilities which might eventually be included in the Ann Arbor center are provisions for theatrical events, music, programs, dance and business and social conventions, as well as such 'events as the builders' show, Science Fair, banquet hall and meeting rooms. Potter suggested that the proposed facility should contain space for 2,300 seats, and also space for 1,200 and 800 seats in what possibly could be a flexible arrangement. He said the "very minimum" for which an auditorium can be built is $1,500 a seat, which would make the cost of a 2,000-seat auditorium a minimum of $3,000,000. Potter said the Madison Civic Center financing was entirely based on a bond issue passed by referendum in 1954. He said that any committee for such a project should be nonpartisan, with no more than two city councilmen on it. He also said it should include representatives of the mayor and the city attorney's office. Potter said the committee should work closely with construction plans to satisfy this need. A sum of $3,500 has been allocated for the preliminary feasibility study. The committee plans to meet city planning commission and park superintendent, and that site selection and an architect for the project should be chosen early. The committee expressed the hope that the facility could be located in a central section of the city. Potter said it was "very important" that parking be integrated with the facility. At the direction of Mayor Wendell E. Hulcher, the Recreation Advisory Board last year appointed an ad hoc committee to evaluate the need for a civic center facility in Ann Arbor and to formulate site and shortly to set up a permanent committee of interested individuals broadly representing the citizens and organizations in Ann Arbor, and to supervise development of the project.