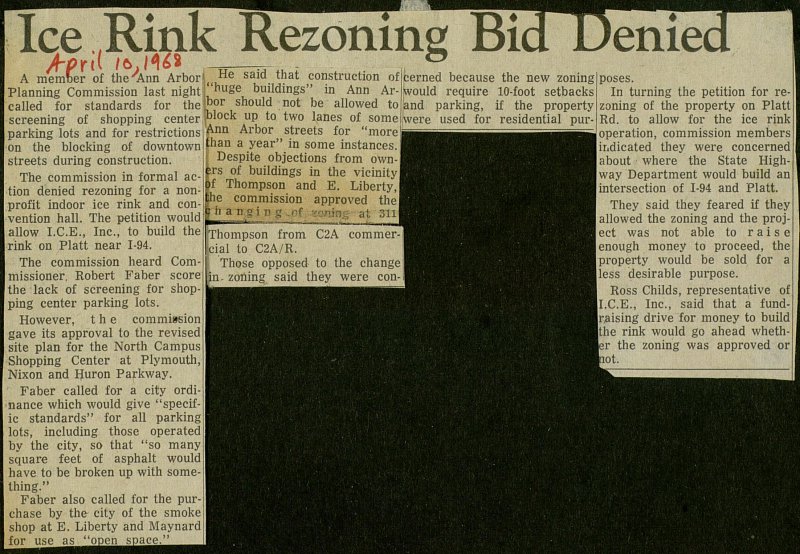 A member of the Ann Arbor Planning Commission last night called for standards for the screening of shopping center parking lots and for restrictions on the blocking of downtown streets during construction. The commission in formal action denied rezoning for a nonprofit indoor ice rink and convention hall. The petition would allow I.C.E., Inc., to build the rink on Platt near 1-94. The commission heard Commissioner, Robert Faber score the lack of screening for shopping center parking lots. However, the commission gave its approval to the revised site plan for the North Campus Shopping Center at Plymouth, Nixon and Huron Parkway. Faber called for a city ordinance which would give "specific standards" for all parking lots, including those operated by the city, so that "so many square feet of asphalt would have to be broken up with something." Faber also called for the purchase by the city of the smoke shop at E. Liberty and Maynard for use as "open space." He said that construction of 'huge buildings" in Ann Ar5or should not be allowed to block up to two lanes of some Ann Arbor streets for "more han a year" in some instances. Despite objections from owners of buildings in the vicinity of Thompson and E. Liberty, the commission approved the Thompson from C2A commercial to C2AR. Those opposed to the change in zoning said they were concerned because the new zoning would require 10-foot setbacks and parking, if the property were used for residential poses. In turning the petition for rezoning of the property on Platt Rd. to allow for the ice rink operation, commission members indicated they were concerned about where the State Highway Department would build an intersection of I-94 and Platt. They said they feared if they allowed the zoning and the project was not able to raise enough money to proceed, the property would be sold for a less desirable purpose. Ross Childs, representative of I.C.E., Inc., said that a fundraising drive for money to build the rink would go ahead whether the zoning was approved or not.