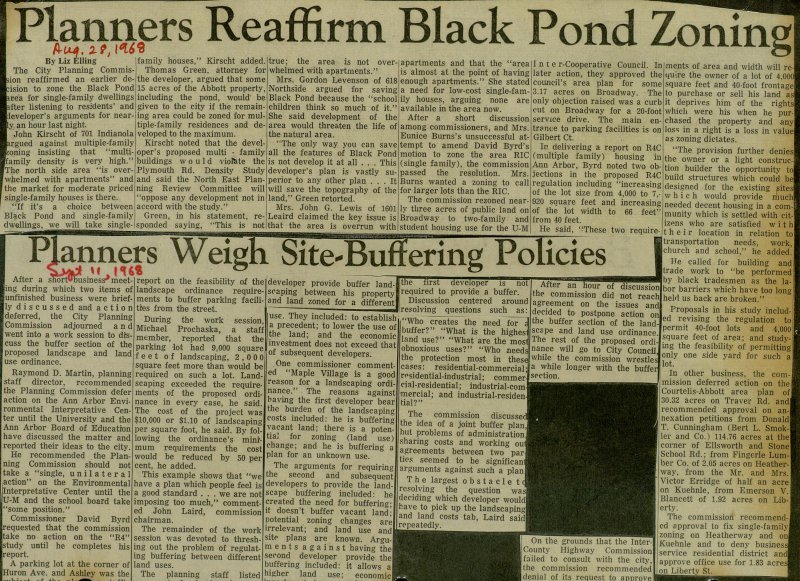 The City Planning Commission reaffirmed an earlier decision to zone the Black Pond area for single-family dwellings titer listening to residents and developer's arguments for nearly an hour last night. John Kirscht of 701 Indianola prgued against multiple-family toning insisting that "multi-family density is very high." The north side area "is overwhelmed with apartments" and the market for moderate priced single-family houses is there. "If it's a choice between Black Pond and single-family dwellings, we will take family houses," Kirscht added. Thomas Green, attorney for the developer, argued that some 15 acres of the Abbott property, including the pond, would be given to the city if the remaining area could be zoned for multiple-family residences and developed to the maximum. Kirscht noted that the developer' s proposed multi-family buildings would violate the Plymouth Rd. Density Study and said the North East Planning Review Committee will "oppose any development not in accord with the study." Green, in his statement, responded saying, "This is not true; the area is not overwhelmed with apartments." Mrs. Gordon Levenson of 618 Northside argued for saving Black Pond because the "school children think so much of it." She said development of the area would threaten the life of the natural area. "The only way you can save all the features of Black Pond is not develop it at all ... This developer's plan is vastly superior to any other plan . . . It will save the topography of the land," Green retorted. Mrs. John G. Lewis of 1601 Leaird claimed the key issue is that the area is overrun with apartments and that the "area is almost at the point of having enough apartments." She stated a need for low-cost single-family houses, arguing none are available in the area now. After a short discussion among commissioners, and Mrs. Eunice Burns's unsuccessful attempt to amend David Byrd's motion to zone the area RIC (single family), the commission passed the resolution. Mrs. Burns wanted a zoning to call for larger lots than the RIC. The commission rezoned nearly three acres of public land on Broadway to two-family and student housing use for the U-M Inter-Cooperative Council. ín later action, they approved the council's area plan for some 3.17 acres on Broadway. The only objection raised was a curb cut on Broadway for a 20-foot service drive. The main entrance to parking facilities is on Gilbert Ct. In delivering a report on R4C (multiple family) housing in Ann Arbor, Byrd noted two objections in the proposed R4C regulation including "increasing of the lot size f rom 4,000 to 7,920 square feet and increasing of the lot width to 66 feet" from 40 feet. He said, "These two requirements of area and width will require the owner of a lot of 4,000 square feet and 40-foot frontage to purchase or sell his land and it deprives him of the rights which were his when he purchased the property and any loss in a right is a loss in value as zoning dictates. "The provision further denies the owner or a light construction builder the opportunity to build structures which could be designed for the existing sites which would provide much needed decent housing in a community which is settled with citizens who are satisfied with their location in relation to transportation needs, work, church and school," he added. He called for building and trade work to "be performed by black tradesmen as the labor barriers which have too long held us back are broken." Proposals in his study included revising the regulation to permit 40-foot lots and 4,000 square feet of area; and studymg the feasibility of permitting only one side yard for such a lot. In other business, the commission deferred action on the Courtelis-Abbott area plan of 30.32 acres on Traver Rd. and rccommended approval on annexation petitions from Donald T. Cunningham (Bert L. Smokler and Co.) 114.76 acres at the corner of Ellsworth and Stone School Rd.; from Fingerle Lumber Co. of 2.05 acres on Heatherway, from the Mr. and Bert L. Smokler and Co. of half an acre on Kuehnle, from Emerson V. Blancett of 1.92 acres on Liberty. The commission recommended approval to fix single-family zoning on Heatherway and on Kuehnle and to deny business service residential district and approve office use for 1.83 aerea on Liberty St.