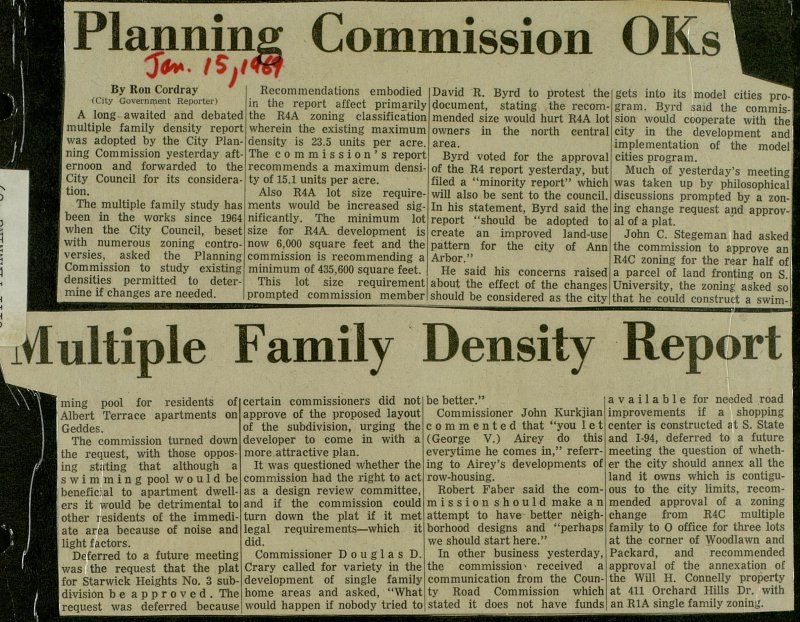 A long awaited and debated multiple family density report was adopted by the City Planning Commission yesterday afternoon and forwarded to the City Council for its consideration. The multiple family study has been in the works since 1964 when the City Council, beset with numerous zoning controversies, asked the Planning Commission to study existing densities permitted to determine if changes are needed. Recommendations embodied in the report affect primarily the R4A zoning classification wherein the existing maximum density is 23.5 units per acre. The commission's report recommends a maximum density of 15.1 units per acre. Also R4A lot size requirements would be increased significantly. The minimum lot size for R4A development is now 6,000 square feet and the commission is recommending a minimum of 435,600 square feet. This lot size requirement prompted commission member David R. Byrd to protest the document, stating the recommended size would hurt R4A lot owners in the north central area. Byrd voted for the approval of the R4 report yesterday, but filed a "minority report" which will also be sent to the council. In nis statement, Byrd said the : report "should be adopted to créate an improved land-use pattern for the city of Ann I Arbor." ; He said his concerns raised about the effect of the changes 1 should be considered as the city t gets into its model cities program. Byrd said the commission would cooperate with the city in the development and implementation of the model cities program. Much of yesterday's meeting j was taken up by philosophical discussions prompted by a zoning change request and approval of a plat. John C. Stegeman had asked the commission to approve an R4C zoning for the rear half of a parcel of land fronting on S. University, the zoning asked so Lhat he could construct a ming pool for residents of Albert Terrace apartments on Geddes. The commission turned down the request, with those opposing stating that although a swimming pool w o u 1 d be benendal to apartment dwellers it would be detrimental to other residents of the immediate area because of noise and light factors. Deferred to a future meeting was the request that the plat for Starwick Heights No. 3 subdivisión be approved. The request was deferred because certain commissioners did not approve of the proposed layout of the subdivisión, urging the developer to come in with a more attractive plan. It was questioned whether the commission had the right to act as a design review committee, and if the commission could turn down the plat if it met legal requirements- which it did. Commissioner Douglas D. Crary called for variety in the development of single family home areas and asked, "What would happen if nobody tried to be better." Commissioner John Kurkjian commented that "you let (George V.) Airey do this everytime he comes in," referring to Airey's developments of row-housing. Robert Faber said the commission should make a n attempt to have better nèighborhood designs and "perhaps we should start here." In other business yesterday, the commission received a communication from the County Road Commission which stated it does not have funds available for needed road improvements if a shopping center is constructed at S. State and 1-94, deferred to a future meeting the question of whether the city should annex all the land it owns which is contiguous to the city limits, recommended approval of a zoning change from R4C multiple family to O office for three lots at the corner of Woodlawn and Packard, and recommended approval of the annexation of the Will H. Connelly property at 411 Orchard Hills Dr. with an RÍA single family zoning.