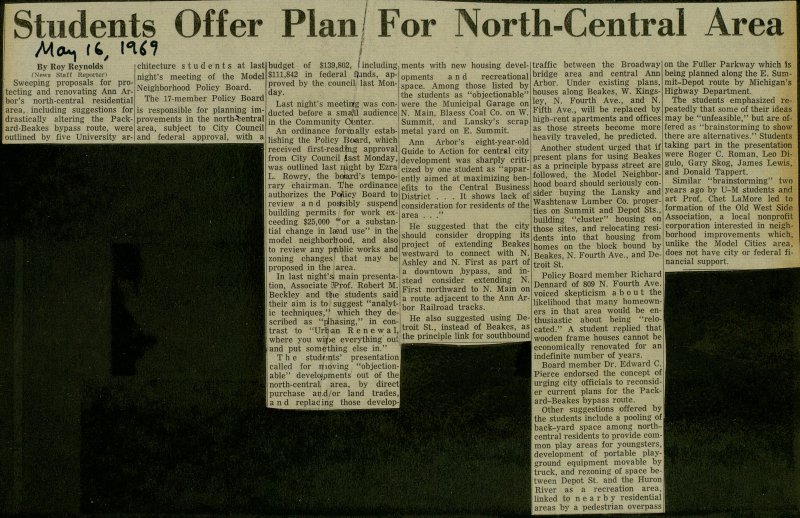 Sweeping proposals for protecting and renovating Anti Arbor's north-central residential area, . including suggestions for drastically altering the Packard-Beakes bypass route, were outlined by five University achitecture students at last night's meeting of the Model Neighborhood Policy Board. The 17-member Policy Board is responsible for planning improvements in the north-central area, subject to City Council and federal approval, with a budget of $139,802, including $111,842 in federal fyinds, approved by the council, last Monday. Last night's meetirtg was conducted before a smaJU audience in the Community Qonter. An ordinance foritnally establishing the Policy Board, which received first-readifng approval from City Council iaist Monday, was outlined last riight by Ezra L. Rowry, the baard's temporary chairman. T'he ordinance authorizes the Poilicy Board to review and poasibly suspend building permits for work exceeding $25,000 "or a substantial change in laiad use" in the model neighborh ood, and also to review any prcblic works and zoning changesi that may be proposed in the area. In last night's. main presentation, Associate l'Prof. Robert M. Beckley and ttie students said their aim is to suggest "analytic techniques," which they described as "plhasing," in contrast to "Urb'an Rene wal, where you wipe everything out, and put something else in." The stud;nts' presentationj called for nioving "objectionable" developments out of the north-central area, by direct purchase an.dor land trades, and replac ing those develop-l ments with new housing developments and recreational space. Among those listed by the students as "objectionable" were the Municipal Garage on N. Main, Blaess Coal Co. on W. Summit, and Lansky's scrap metal yard on E. Summit. Ann Arbor's eight-year-old Guide to Action for central city development was sharply criticized by one student as "apparently aimed at maximizing benefits to the Central Business District . . . It shows lack of consideration for residents of the area . . ." He suggested that the city should consider dropping its project of extending Beakes westward to connect with N. Ashley and N. First as part of a downtown .bypass, and instead consider extending. N. First northward to N. Main on a route adjacent to the Ann Arbor Railroad tracks. He also suggested using Detroit St, instead of Beakes, as the principie link for southbound traífic between the Broadway bridge area and central Ann Arbor. Under existing plans, houses along Beakes, W. Kingsley, N. Fourth Ave., and N. Fifth Ave., will be replaced by high-rent apartments and offices as those streets become more heavily traveled, he predicted. Another student urged that if present plans for using Beakes as a principie bypass street are followed, the Model Neighborhood board should seriously consider buying the Lansky and Washtenaw Lumber Co. properties on Summit and Depot Sts., building "cluster" housing on those sites, and relocating residents into that housing from homes on the block bound by Beakes, N. Fourth Ave., and Detroit St. Policy Board member Richard Dennard of 809 N. Fourth Ave. voiced skepticism a b o u t the likelihood that many homeowners in that area would be enthusiastic about being "relocated." A student replied that wooden frame houses cannot be economically renovated for an indefinite number of years. Board member Dr. Edward C. flPJerce endorsed the concept of urging city officials to reconsider current plans for the Packard-Beakes bypass route. Other suggestions offered by the students include a pooling of Iback-yard space among northcentral residents to provide common play areas for youngsters, development of portable playground equipment movable by truck, and rezoning of space between Depot St. and the Huron River as a recreation area, linked to nearby residential tareas by a pedestrian overpass on the Fuller Parkway which ís being planned along the E. Summit-Depot route by Michigan's Highway Department. The students emphasized repeatedly that some of their ideas may be "unfeasible," but are offered as "brainstorming to show there are alternatives." Students taking part in the presentation were Roger C. Roman, Leo Digulo, Gary Skog, James Lewis, and Donald Tappert. Similar "brainstorming" two years ago by U-M students and art Prof. Chet LaMore led to formation of the Old West Side Association, a local nonprofit Corporation interested in neighborhood improvements which, unlike the Model Cities area, does not have city or federal financial support.