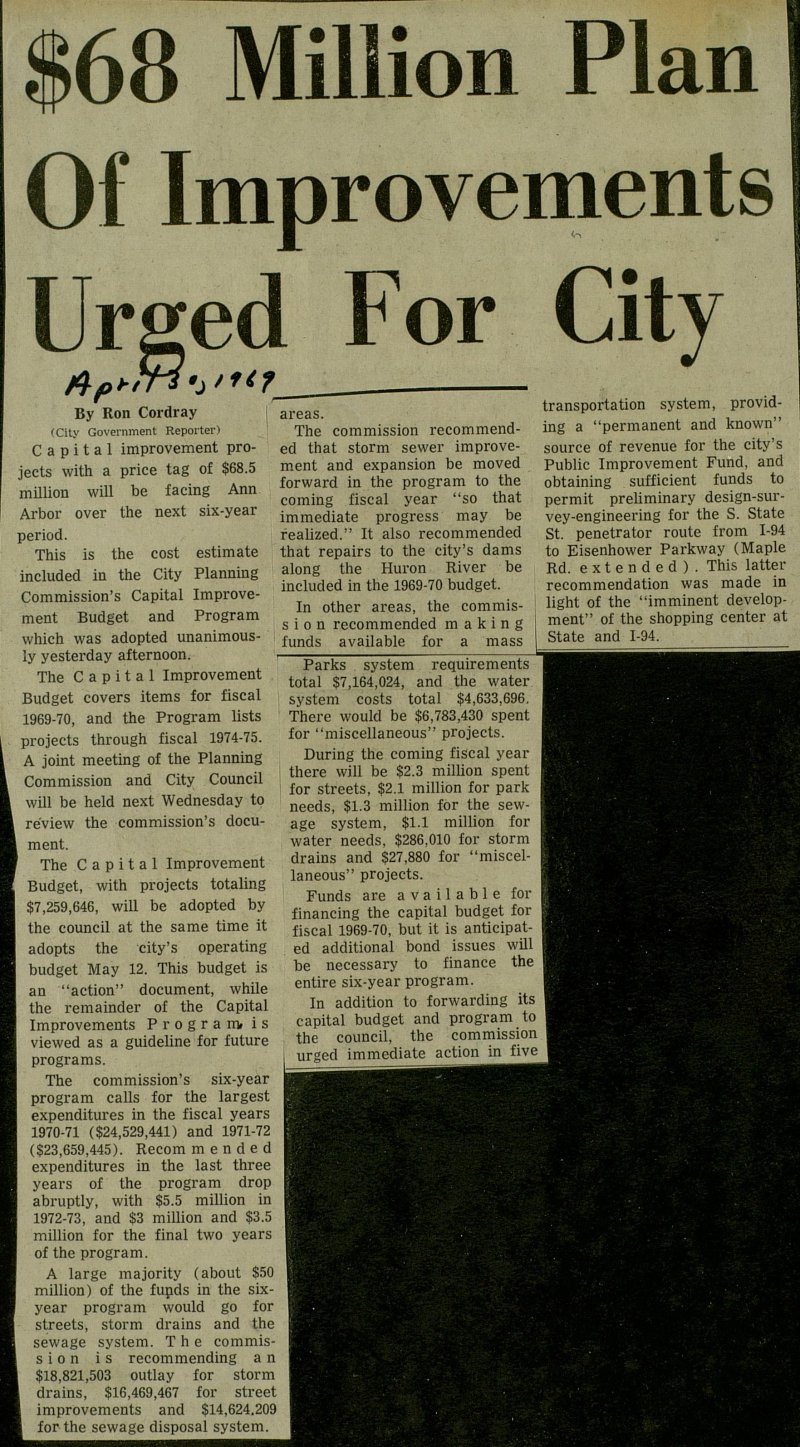 Capital improvement projects with a price tag of $68.5 million will be facing Ann Arbor over the next six-year period. This is the cost estímate included in the City Planning Commission's Capital Improvement Budget and Program which was adopted unanimously yesterday afternoon. The Capital Improvement Budget covers items for fiscal 1969-70, and the Program lists projects through fiscal 1974-75. A joint meeting of the Planning Commission and City Council will be held next Wednesday to review the commission's docuI ment. [ The Capital Improvement Budget, with projects totaling $7,259,646, will be adopted by the council at the same time it adopts the city's operating budget May 12. This budget is an "action document, whüe the remainder of the Capital Improvements Prograrrw is viewed as a guideline for future programs. The commission's six-year program calis for the largest expenditures in the fiscal years 1970-71 ($24,529,441) and 1971-72 ($23,659,445). Recom m e n d e d expenditures in the last three years of the program drop abruptly, with $5.5 million in 1972-73, and $3 million and $3.5 million for the final two years of the program. A large majority (about $50 million) of the fupds in the sixyear program would go for streets, storm drains and the sewage system. The commiss i o n is recommending a n $18,821,503 outlay for storm drains, $16,469,467 for street improvements and $14,624.209 for the sewage disposal system. áreas. The commission recommended that storm sewer improvement and expansión be moved forward in the program to the coming fiscal year "so that immediate progress may be fealized." It also recommended that repairs to the city's dams along the Hurón River be included in the 1969-70 budget. In other areas, the commiss i o n recommended m a k i n g funds available for a mass Parks system requirements total $7,164,024, and the water system costs total $4,633,696. There would be $6,783,430 spent for "miscellaneous" projects. During the coming fiscal year there will be $2.3 million spent for streets, $2.1 million for park needs, $1.3 million for the sewage system, $1.1 million for water needs, $286,010 for storm drains and $27,880 for "miscellaneous" projects. Funds are a v a i 1 a b 1 e for financing the capital budget for fiscal 1969-70, but it is anticipated additional bond issues will be necessary to finance the entire six-year program. In addition to forwarding its capital budget and program to the council, the commission urged immediate action in five transportation system, providing a "permanent and known" source of reverme for the city's Public Improvement Fund, and obtaining sufficient funds to permit preliminary design-survey-engineering for the S. State St. penetrator route from 1-94 to Eisenhower Parkway (Maple Rd. extended). This latter recommendation was made in light of the "imminent development" of the shopping center at State and 1-94.