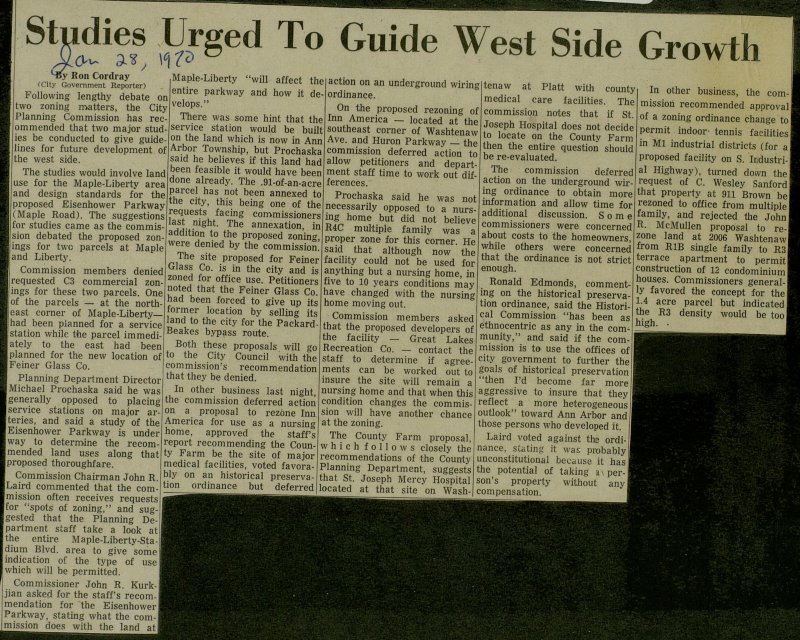 Following lengthy debate o two zoning matters, the Cit Planning Commission has ree ommended that two major stud ies be conducted to give guide lines for future development o [the west side. The studies would involve lanc use for the Maple-Liberty area and design standards for the proposed Eisenhower Parkway (Maple Road). The suggestions for studies came as the commission debated the proposed zonings for twe pareéis at Maple and Liberty. Commission members denied requested C3 commercial zonings for these two pareéis. One of the pareéis - at the northeast corner of Maple-Liberty- had been pianned for a service station while the parcel immediately to the east had been pianned for the new location of Feiner Glass Co. Planning Department Director Michael Prochaska said he was generally opposed to placing service stations on major arteries, and said a study of the Eisenhower Parkway is under svay to determine the recomtnended land uses along that 3roposed thoroughfare. tommission Chairman John R. Laird commented that the commission often receives requests for "spots of zoning," and suggested that the Planning Department staff take a look at the entire Maple-Liberty-Staiium Blvd. area to give some indication of the type of use which will be permitted. Commissioner John R. Kurkian asked for the staff's recom-j nendation ior the Eisenhower Parkway, stating what the comnission does with the land atj Maple-Liberty "will affect th entire parkway and how it d velops." There was some hint that th service station would be buil on the land which is now in An Arbor Township, but Prochask said he believes if this land had been feasible it would have been done already. The .91-of-an-acre )arcel has not been annexed to the city, this being one of the requests facing commissioners ast night. The annexation, in addition to the proposed zonin were denied by the commission' The site proposed for Feiner Glass Co. is in the city and is zoned for office use. Petitioners noted that the Feiner Glass Co had been forced to give up its ormer location by selling its and to the city for the Packard Beakes bypass route. Both these proposals will go o the City Council with the ommission's recommendation nat they be denied. In other business last night, the commission deferred action on a proposal to rezone Inn America for use as a nursing home, approved the staff's report recommending the County Farm be the site of major medical facilities, voted favorably on an historical preservation ordinance but deferred ■ action on an underground wirin ordinance. On the proposed rezoning o Inn America - located at th southeast corner of Washtenaw Ave. and Huron Parkway - the commission deferred action to allow petitioners and department staff time to work out differences. Prochaska said he was not necessarily opposed to a nursng home but did not believe R4C multiple family was a proper zone for this corner. He aia mat although now the facility could not be used for anything but a nursing home, in five to 10 years conditions may have changed with the nursing home moving out. Commission members asked hat the proposed developers of he facility - Great Lakes Recreation Co. -- contact the taff to determine if agreements can be worked out to nsure the site will remain a ursing home and that when this ondition changes the commision will have another chance t the zoning. The County Farm propos al, which follows closely the ecommendations of the County Dlanning Department, suggests hat St. Joseph Mercy Hospital cated at that site on tenaw at Platt with county medical care facilities. The commission notes that if St. Joseph Hospital does not decide to lócate on the County Farm then the entire question should be re-evaluated. The commission deferred action on the underground wiring ordinance to obtain more information and allow time for additional discussion. S o m e commissioners were concerned about costs to the homeowners, while others were concerned that the ordinance is not strict enough. Ronald Edmonds, commentng on the historical preservaion ordinance, said the Historical Commission "has been as ethnocentric as any in the community," and said if the 1 mission is to use the offices of I ity government to further the I goals of historical preservation I 'then I'd become far morel ggressive to insure that they I eflect a more heterogeneous I utlook" toward Ann Arbor and I hose persons who developed it. s Laird voted against the 1 anee, stating it was probablyH nconstitutional beuause it has ■ he potential of taking a 1 on's property without anyB ompensation. $ j In other business, the com-J mission recommended approvall of a zoning ordinance change tol permit tennis faeilitiesl in Ml industrial districts (for al proposed facility on S. Industri-I al Highway), turned down thel request of C. Wesley Sanfordl that property at 911 Brown bel rezoned to office from multiple! :amily, and rejected the Johnl R. McMullen proposal to re-l zone land at 2006 Washtenawl :rom K1B single family to R3I terrace apartment to permití construction of 12 condominiuml ïouses. Commissioners 1 y favored the concept for thel 4 acre parcel but indicatedl he E3 density would be tooi high. f