Fight May Be Brewing In Superior Rezoning 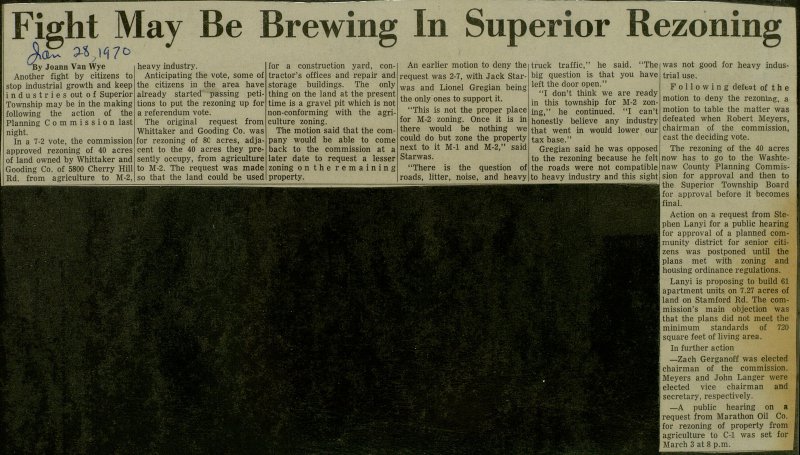 Another fight by citizens to stop industrial growth and keep industries out o f Superior Township may be in the making following the action of the Planning Commission last night. In a 7-2 vote, the commission approved rezoning of 40 acres of land owned by Whittaker and Gooding Co. of 5800 Cherry Hill Rd. from agriculture to M-2, heavy industry. Anticipating the vote, some of the citizens in the area have already started passing petitions to put the rezoning up for a referendum vote. The original request from Whittaker and Gooding Co. was for rezoning of 8C acres, adjacent to the 40 acres they presently occupy, from agriculture to M-2. The request was made so that the land could be used íor a construction yard, contractor's offices and repair and storage buildings. The only thing on the land at the present time is a gravel pit which is not non-conforming with the agriculture zoning. The motion said that the company would be able to come back to the commission at a later date to request a lesser zoning on the remaining property. An earlier motion to deny the request was 2-7, with Jack Starwas and Lionel Gregian being the only ones to support it. "This is not the proper place for M-2 zoning. Once it is in there would be nothing we could do but zone the property next to it M-l and M-2," said Starwas. "There is the question of roads, litter, noise, and heavy truck traffic," he said. "The big question is that you have left the door open." "I don't think we are ready in this township for M-2 zoning," he continued. "I can't honestly believe any industry that went in would lower our tax base." Gregian said he was opposed to the rezoning because he feit the roads were not compatible to heavy industry and this sight was not good ior heavy industrial use. Following deitat of t h e motion to deny the rezoning, a motion to table the matter was defeated when Robert Meyers, chairman of the commission, cast the deciding vote. The rezoning of the 40 acres now has to go to the Washtenaw County Planning Commission for approval and then to the Superior Township Board for approval before it becomes final. Action on a request from Stephen Lanyi for a public hearing for approval of a planned community district for senior citizens was postponed until the plans met with zoning and housing ordinance regulations. Lanyi is proposing to build 61 apartment units on 7.27 acres of land on Stamford Rd. The commission's main objection was that the plans did not meet the minimum standards of 720 square f eet of living area. In further action - Zach Gerganoff was elected chairman of the commission. Meyers and John Langer were elected vice chairman and secretary, respectively. - A public hearing on a request from Marathon OU Co. for rezoning of property from agriculture to C-l was set for March 3 at8p.m.