Zoning Change Is Granted In Superior 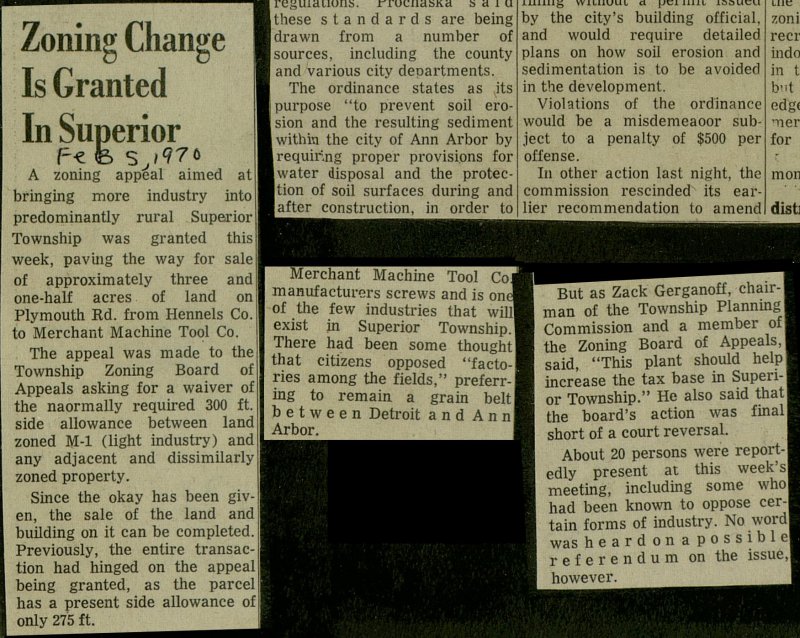 A zoning appeal aimed at bringing more industry into predominantly rural Superior Township was granted this week, paving the way for sale of approximately three and one-half acres of land on Plymouth Rd. from Hennels Co. to Merchant Machine Tool Co. The appeal was made to the Township Zoning Board of Appeals asking for a waiver of the normally required 300 ft. side allowance between land zoned M-l (light industry) and any adjacent and dissimilarly zoned property. Since the okay has been given, the sale of the land and building on it can be completed. Previously, the entire transaction had hinged on the appeal being granted, as the parcel has a present side allowance of only 275 ft. Merchant Machine Tool Co manufacturers screws and is one of the few industries that will exist in Superior Township. There had been some thought that citizens opposed "factories among the fields," preferring to remain a grain belt between Detroit and Ann Arbor. But as Zack Gerganoff, chairman of the Township Planning Commission and a member of the Zoning Board of Appeals, said, "This plant should help increase the tax base in Superior Township." He also said that the board's action was final short of a court reversal. About 20 persons were reportedly present at this week's meeting, including some who had been known to oppose certain forms of industry. No word was heard on a possible referendum on the issue, however.