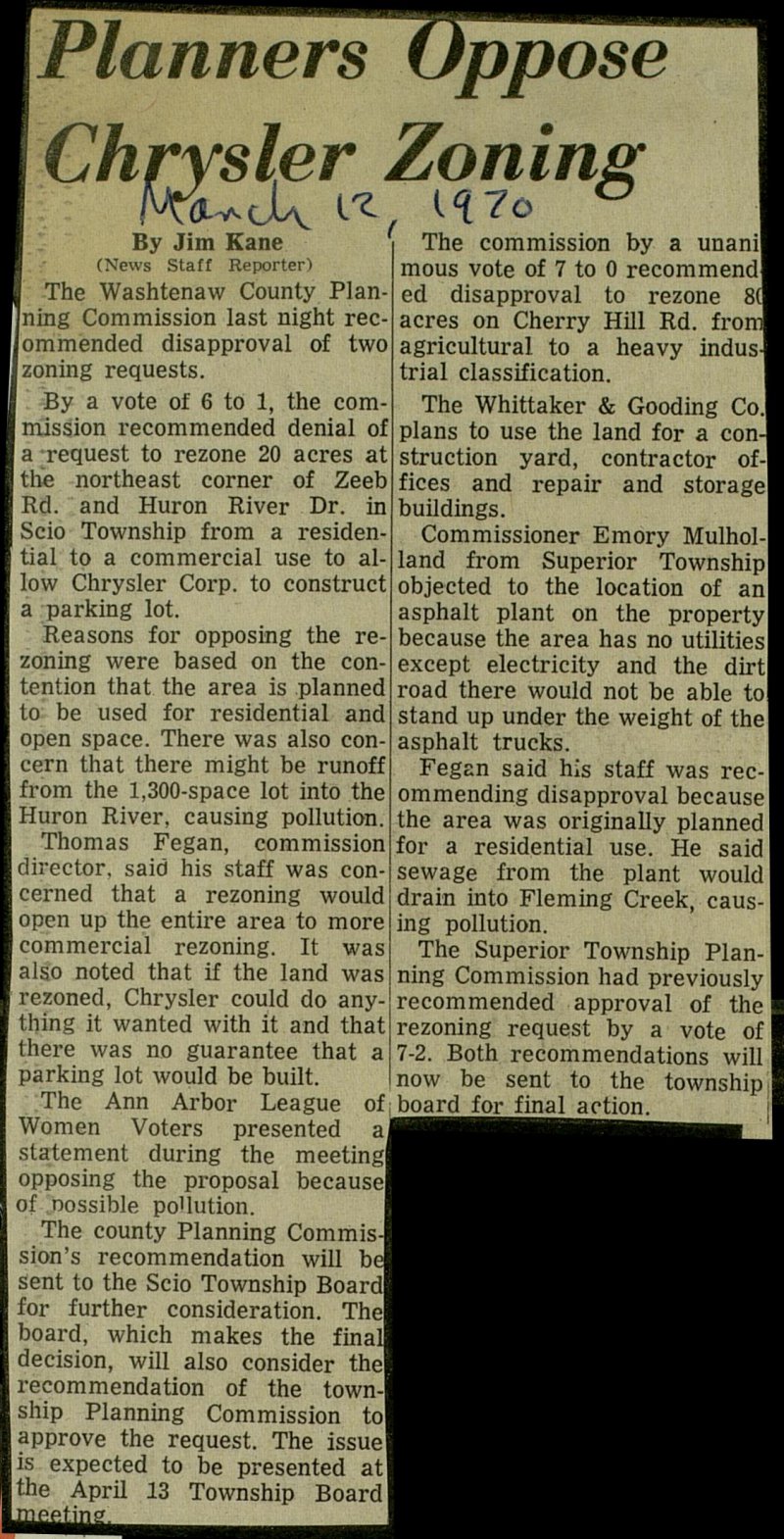 The Washtenaw County Planning Commission last night recjommended disapproval of two zoning requests. By a vote of 6 to 1, the commission recommended denial of a request to rezone 20 acres at the northeast corner of Zeeb Rd. and Huron River Dr. in Scio Township from a residential to a commercial use to allow Chrysler Corp. to construct a parking lot. Reasons for opposing the rezoning were based on the contention that the area is planned to be used for residential and open space. There was also concern that there might be runoff from the 1,300-space lot into the Huron River, causing pollution. Thomas Fegan, commission director, said his staff was concerned that a rezoning would open up the entire area to more commercial rezoning. It was also noted that if the land was rezoned, Chrysler could do anything it wanted with it and that there was no guarantee that a parking lot would be built. The Ann Arbor League of Women Voters presented a statement during the meetingl opposing the proposal because of nossible po'lution. The county Planning CommisJ sion's recommendation will bel sent to the Scio Township Boardï for further consideration. The board, which makes the finau decisión, will also consider the] recommendation of the township Planning Commission to approve the request. The issue s expected to be presented at the April 13 Township Board The commission by a unanil mous vote of 7 to 0 recommendl ed disapproval to rezone 8(1 acres on Cherry Hill Rd. froml agricultural to a heavy indusJ trial classification. The Whittaker & Gooding Co. plans to use the land for a conJ struction yard, contractor offices and repair and storage buildings. Commissioner Emory Mulholland from Superior Township objected to the location of an asphalt plant on the property because the área has no utilities except electricity and the dirt road there would not be able to stand up under the weight of the asphalt trucks. Fegan said his staff was recommending disapproval because the area was originally planned for a residential use. He said sewage from the plant would drain into Fleming Creek, causing pollution. The Superior Township Planning Commission had previously recommended approval of the rezoning request by a vote of 7-2. Both recommendations will now be sent to the township board for final action .