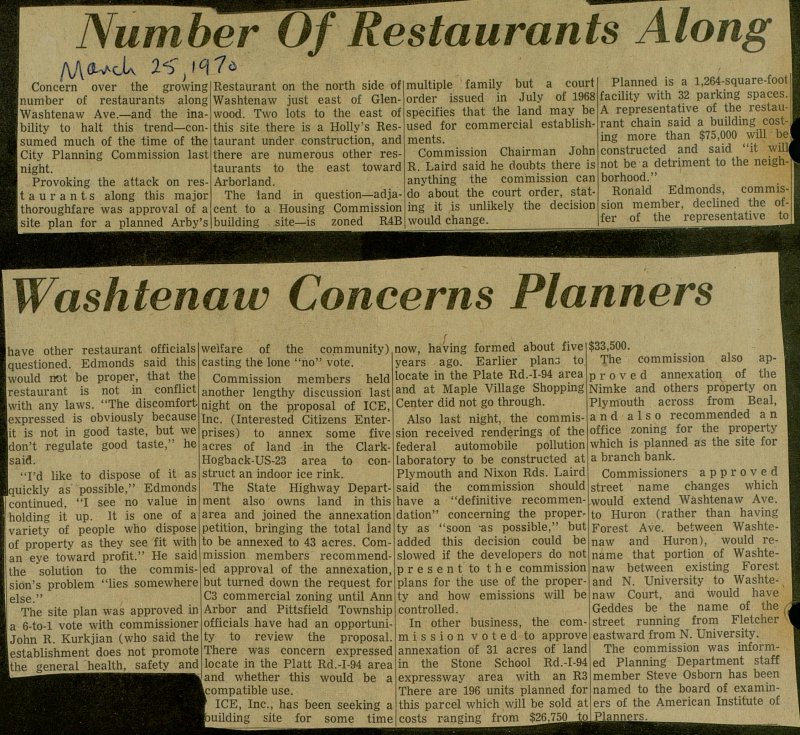 Concern over the growing number of restaurants along Washtenaw Ave.- and the inability to halt this trend- consumed much of the time of the City Planning Commission last night. Provoking the attack on restaurants along this major thoroughfare was approval of a site plan for a planned Arby's Restaurant on the north side of Washtenaw just east of Glenwood. Tvvo lots to the east of this site there is a Holly's Restaurant under construction, and there are numerous other restaurants to the east toward Arborland. The land in question- adjacent to a Housing Commission building site- is zoned R4B multiple family but a court order issued in July of 1968 spècifies that the land may be used for commercial establishments. Commission Chairman John R. Laird said he doubts there is anything the commission can do about the court order, stating it is unlikely the decisión would change. _ Planned is a 1,264-square-foot Eacility with 32 parking spaces. A. representative of the restaurant chain said a building cost-1 ing more than $75,000 will bej constructed and said "it willj not be a detriment to the neigh-j borhood." Ronald Edmonds, commission member, declined the offer of the representative to have other restaurant officials questioned. Edmonds said this would not be proper, that the restaurant is not in conflict with any laws. "The discomfort expressed is obviously because it is not in good taste, but we don't regúlate good taste," he said. "I'd like to dispose of it as tjuickly as possible," Edmonds continued, "I see no valué in holding it up. H is one of a variety of people who dispose of property as they see fit with an eye toward profit." He said the solution to the commission's problem "lies somewhere else." The site plan was approved in a 6-to-l vote with commissioner John R. Kurkjian (who said the [establishment does not promote the general health, safety and welfare of the community) casting the lone "no" vote. Commission members held another lengthy discussion last night on the proposal of ICE, Inc. (Interested Citizens Enterprises) to annex some five acres of land in the ClarkHogback-US-23 area to construct an indoor ice rink. The State Highway Department also owns land in this area and joined the annexation petition, bringing the total iand to be annexed to 43 acres. Commission members recommended approval of the annexation, but turned down the request for C3 commercial zoning until Ann Arbor and Pittsfield Township officials have had an opportunity to review the proposal. There was concern expressed lócate in the Platt Rd.-I-94 area and whether this would be a compatible use. t ICE, Inc., has been seeking a jbuilding site for some time now, ha ving formed about fivel years ago. Earlier plans to ocate in the Plate Rd.-I-94 area and at Maple Village Shopping Center did not go through. Also last night, the commission received renderings of the federal automobile pollution aboratory to be constructed at Plymouth and Nixon Rds. Laird said the commission should have a "definitive recommendation" concerning the property as "soon -as possible," but added this decisión could be slowed if the developers do not p r e s e n t to the commission plans for the use of the property and how emissions will be controlled. In other business, the commission voted to approve annexation of 31 acres of land in the Stone School Rd.-I-94 expressway área with an R3 There are 196 units planned for this parcel which will be sold at costs ranging from$26J5to $33,500. The commission also approved annexatior of the ' Nimke and others property on Plyrtïouth across from Beal, and also recommended a n office zoning for the property which is planned as the site for a branch bank. Commissioners approved street name changes which would extend Wáshtenaw Ave. to Huron (rather than having Forest Ave. between Washtenaw and Huron), would rename that portion of Washtenaw between existing Forest and N. University to , naw Court, and would have Geddes be the name of the street running from Fletcher eastward from N. University. The commission was informed Planning Department staff member Steve Osborn has been named to the board of examiners of the American Institute of Planners.