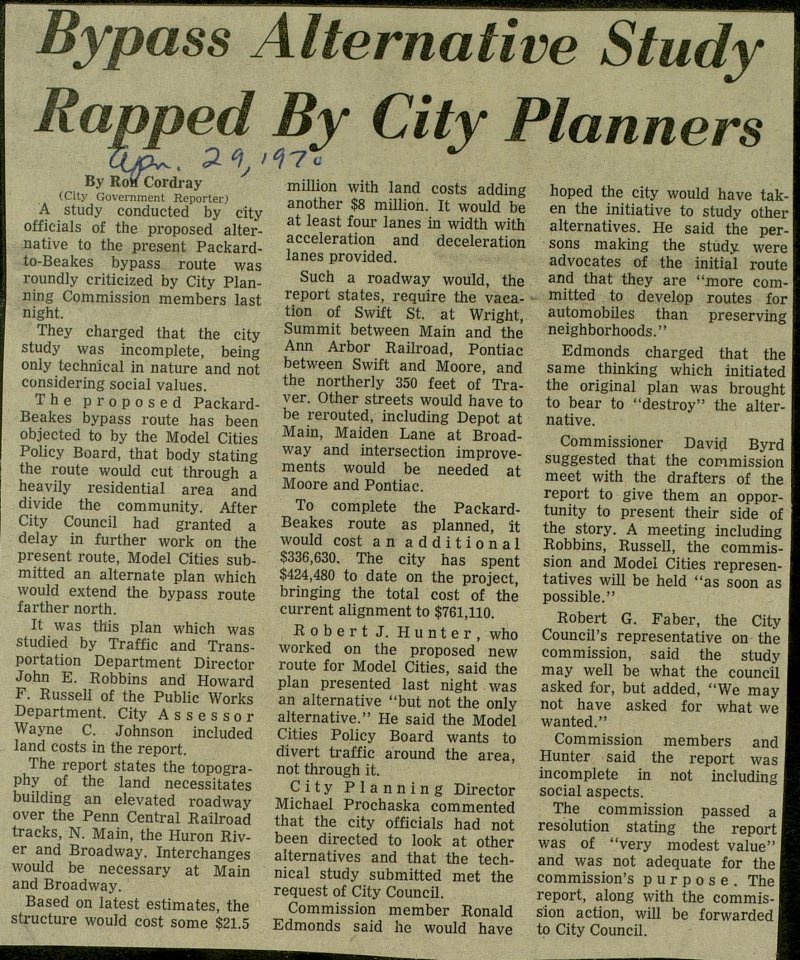 A study conducted by city officials of the proposed alternative to the present Packardto-Beakes bypass route was roundly criticized by City Planning Commission members last night. They charged that the city study was incomplete, being only technical in nature and not considering social values. The proposed PackardBeakes bypass route has been objected to by the Model Cities Policy Board, that body stating the route would cut through a heavily residential area and divide the community. After City Council had granted a delay in further work on the present route, Model Cities submitted an altérnate plan which would extend the bypass route farther north. It was this plan which was studied by Traffic and Transportation Department Director John E. Robbins and Howard F. Russell of the Public Works Department. City Assessor Wayne C. Johnson included land costs in the report. The report states the topography of the land necessitates building an elevated roadway over the Penn Central Railroad tracks, N. Main, the Huron River and Broadway. Interchanges would be necessary at Main and Broadway. Based on latest estimates, the structure would cost some $21.5 million with land costs adding another $8 million. It would be at least four lanes in width with acceleration and deceleration lanes provided. Such a roadway would, the report states, require the vacation of Swift St. at Wright, Summit between Main and the Ann Arbor Railroad, Pontiac between Swift and Moore, and the northerly 350 feet of Traver. Other streets would have to be rerouted, including Depot at Main, Maiden Lane at Broadway and intersection improvements would be needed at Moore and Pontiac. To complete the PackardBeakes route as planned, it would cost an additional $336,630, The city has spent $424,480 to date on the project, bringing the total cost of the current alignment to $761,110. Robert J. Hunter, who worked on the proposed new route for Model Cities, said the plan presented last night was an alternative "but not the only alternative." He said the Model Cities Policy Board wants to divert traffic around the area, not through it. City Planning Director Michael Prochaska commented that the city officials had not been directed to look at other alternatives and that the technical study submitted met the request of City Couneil. Commission member Ronald Edmonds said he would have hoped the city would have taken the initiative to study other alternatives. He said the persons making the were advocates of the initial route and that they are "more committed to develop routes for automobiles than preserving neighborhoods." Edmonds charged that the same thinking which initiated the original plan was brought to bear to "destroy" the alternative. Commissioner David Byrd suggested that the commission meet with the drafters of the report to give them an opportunity to present their side of the story. A meeting including Robbins, Russell, the commission and Model Cities j tatives will be held "as soon as possible." Robert G. Faber, the City Council's representative on the commission, said the study I may vvell be what the council asked for, but added, "We may I not have asked for what we I wanted." Commission members and I Hunter said the report was K incomplete in not including I social aspects. The commission passed a I resolution stating the report! was of "very modest valué" I and was not adequate for thel commission's p u r p o s e . The I report, along with the commis-1 sion action, will be forwardedB to City Council.