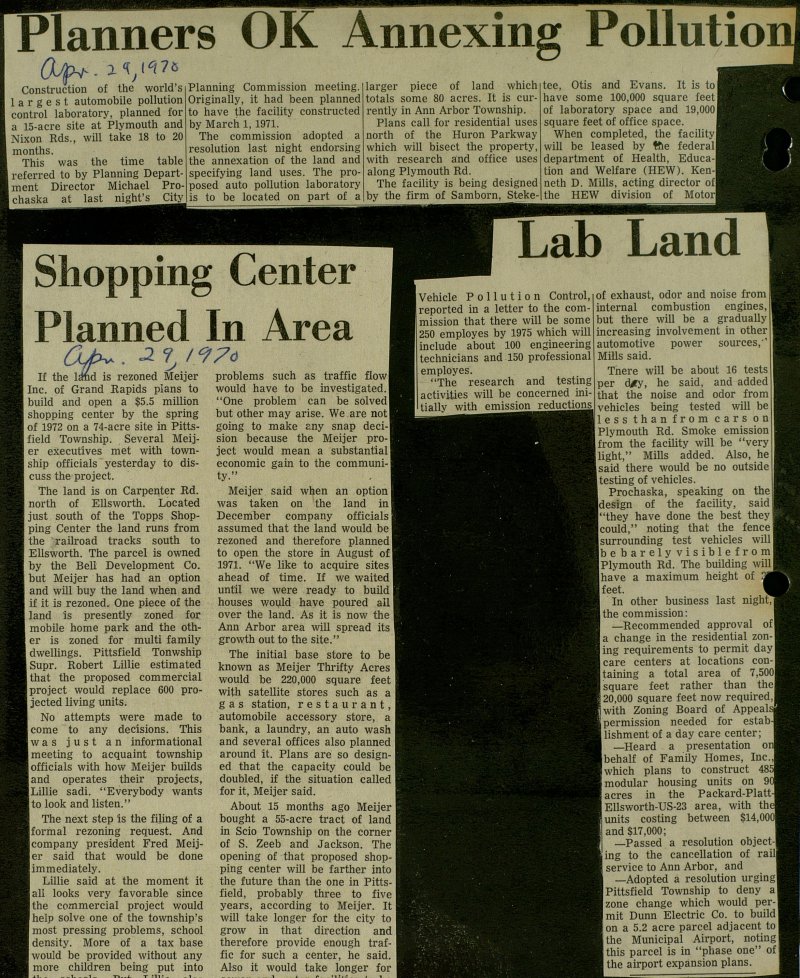 Construction of the world's largest automobile pollution control labor atory, planned for a 15-acre site at Plymouth and Nixon Rds., will take 18 to 20 months. This was the time table referred to by Planning Department Director Michael Prochaska at last night's City Planning Commission meeting. Originally, it had been planned to have the facility constructed by March 1, 1971. The commission adopted a resolution last night endorsing the annexation of the land and specifying land uses. The proposed auto pollution laboratory is to be located on part of a larger piece of land which totals some 80 acres. It is currently in Ann Arbor Township. Plans cali for residential uses north of the Huron Parkway which will bisect the property, with research and office uses along Plymouth Rd. The facility is being designed by the firm of Samborn, tee, Otis and Evans. It is tol have some 100,000 square f eet of laboratory space and 19,000 square feet of office space. When completed, the facilityl will be leased by ffte federal! department of Health, Educa-I tion and Welfare (HEW). Kenneth D. Mills, acting director ofl the HEW división of Motorl Vehicle P o 1 1 u t i o n Control, reported in a letter to the commission that there will be some 250 employés by 1975 which will include about 100 engineering technicians and 150 professional employés. "The research and testing activities will be concerned iniI tiallv with etnission reductions of exhaust, odor and noise froml internal combustión engines, II but there will be a gradually increasing involvement in other automotive power sources,' Mills said. Tnere will be about 16 tests per cUry, he said, and added that the noise and odor from vehicles being tested will be less thanfrom cars on Plymouth Rd. Smoke emission from the facility will be "very light," Mills added. Also, he Isaid there would be no outside testing of vehicles. Prochaska, speaking on the design of the facility, said "they have done the best they could," noting that the fence surrounding test vehicles will bebarely visiblefrom Plymouth Rd. The building will have a maximum height of 31 feet. 1 In other business last nightj the commission: - Recommended approval ofl a change in the residential zoning requirements to permit day care centers at locations containing a total area of 7,500 square feet rather than thel 20,000 square feet now required,! with Zoning Board of Appealsj permission needed for estab-l lishment of a day care center; - Heard a presentation onj jbehalf of Family Homes, Inc.,1 Iwhich plans to construct 485J modular housing units on 901 acres in the Packard-Platt-I Ellsworth-US-23 area, with thd units costing between $14,0001 and $17,000; - Passed a resolution object-I ing to the cancellation of rail] service to Ann Arbor, and - Adopted a resolution urging Pittsfield Township to deny a zone change which would per- mit Dunn Electric Co. to build on a 5.2 acre parcel adjacent to the Municipal Airport, noting this parcel is in "phase one" of the airport expansión plans.