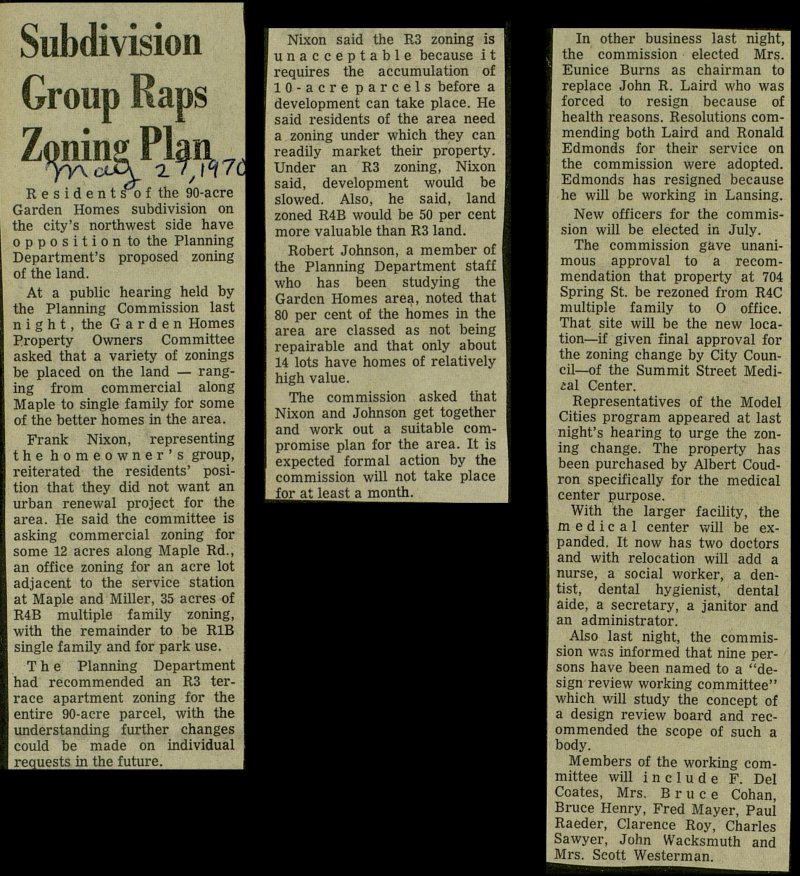 Resident so f the 90-acre Garden Homes subdivisión on the city's northwest side have o p p o s i t i o n to the Planning Department's proposed zoning of the land. At a public hearing held by the Planning Commission last night, the Garden Homes Property Owners Committee asked that a variety of zonings be placed on the land - ranging from commercial along Maple to single family for some of the better homes in the area. Frank Nixon, representing the homeowner's group, reiterated the residents' position that they did not want an urban renewal project for the area. He said the committee is asking commercial zoning for some 12 acres along Maple Rd., an office zoning for an acre lot adjacent to the service station at Maple and Miller, 35 acres of R4B multiple family zoning, with the remainder to be RIB single family and for park use. The Planning Department had recommended an R3 terrace apartment zoning for the entire 90-acre parcel, with the understanding further changes could be made on individual requests in the future. Nixon said the R3 zoning is unacceptable because i t requires the accumulation of 10-acre pareéis before a development can take place. He said residents of the area need a zoning under which they can readily market their property. Under an R3 zoning, Nixon said, development would be slowed. Also, he said, land zoned R4B would be 50 per cent more valuable than R3 land. Robert Johnson, a member of the Planning Department staff who has been studying the Garden Homes area, noted that 80 per cent of the homes in the area are classed as not being repairable and that only about 14 lots have homes of relatively high value. The commission asked that Nixon and Johnson get together and work out a suitable compromise plan for the area. It is expected formal action by the commission will not take place for at least a month. In other business last night, I the commission elected Mrs. Eunice Burns as chairman to replace John R. Laird who was forced to resign because of health reasons. Resolutions commending both Laird and Ronald Edmonds for their service on the commission were adopted. Edmonds has resigned because he will be working in Lansing. New officers for the commission will be elected in July. The commission gave unanimous approval to a recommendation that property at 704 Spring St. be rezoned from R4C multiple family to O office. That site will be the new location- if given final approval for the zoning change by City Council- of the Summit Street Medial Center. Representatives of the Model Cities program appeared at last night's hearing to urge the zoning change. The property has been purchased by Albert Coudron specifically for the medical center purpose. With the larger facility, the medical center will be expanded. It now has two doctors and with relocation will add a nurse, a social worker, a dentist, dental hygiënist, dental aide, a secretary, a janitor and an administrator. Also last night, the commission was informed that nine persons have been named to a "design review working committee" which will study the concept of a design review board and recommended the scope of such a body. Members of the working committee will i n c 1 u d e F. Del Coates, Mrs. Bruce Cohan, Bruce Henry, Fred Mayer, Paul Raeder, Clarence Roy, Charles Sawyer, John Wacksmuth and Mrs. Scott Westerman. -