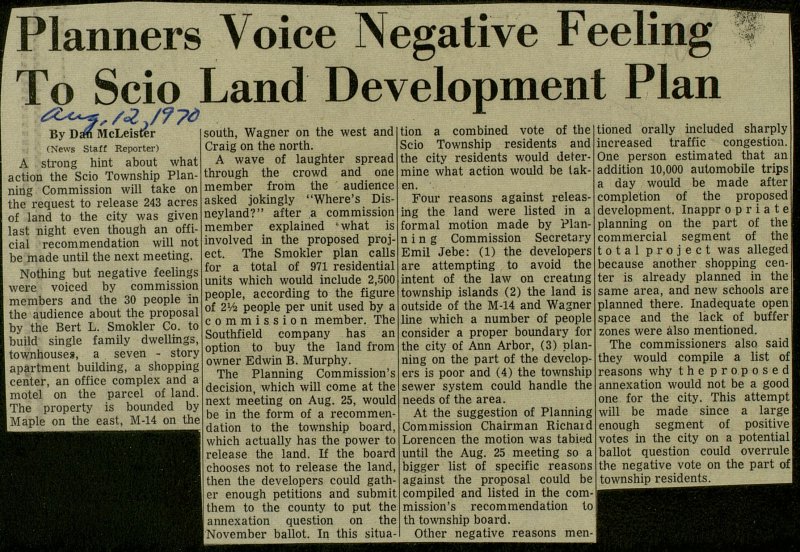 A strong hint a bout what action the Scio Township Planning Commission will take on the request to release 243 acres of land to the city was given last night even though an official recommendation will not be made until the next meeting. Nothing but negative feelings were voiced by commission members and the 30 people in the audience about the proposal by the Bert L. Smokler Co. to build single family dwellmgs, townhouses, a seven - story apartment building, a shopping center, an office complex and a motel on the parcel of land. The property is bounded by Maple on the east, M-14 on the south, Wagner on the west and Craig on the north. A wave of laughter spread Lhrough the crowd and one member from the audience asked jokingly "Where's Disneyland?" after a commission member explained -what is involved in the proposed project. The Smokler plan calis Eor a total of 971 residential units which would include 2,500 people, according to the figure of 2Vi people per unit used by a eommission member. The Southfield company has an option to buy the land from owner Edwin B. Murphy. The Planning Commission's decisión, which will come at the next meeting on Aug. 25, would be in the form of a recommendation to the township board, which actually has the power to release the land. If the board chooses not to release the land, then the developers could gather enough petitions and submit them to the county to put the annexation question on the November ballot. In this tion a combined vote of the Scio Township residents and the city residents would determine what action would be laken. Four reasons against releasing the land were listed in a formal motion made by Plann i n g Commission Secreta ry Emil Jebe: (1) the developers are attempting to avoid the intent of the law on creating township islands (2) the land is outside of the M-14 and Wagner line which a number of people consider a proper boundary for the city of Ann Arbor, (3) planning on the part of the developers is poor and (4) the township sewer system could handle the needs of the area. At the suggestion of Planning Commission Chairman Ricnaid Lorencen the motion was tabied until the Aug. 25 meeting so a bigger list of specific reasons against the proposal could be compiled and listed in the commission's recommendation to th township board. Other negative reasons tioned orally included sharply increased traffic congestión. One person estimated that an addition 10,000 automobile trips a day would be made after completion of the proposed development. Inappr opriate planning on the part of the commercial segment of the total project was alleged because another shopping center is already planned in the same área, and new schools are planned there. Inadequate open space and the lack of buffer zones were álso mentioned. The commissioners also said they would compile a list of reasons why the proposed annexation would not be a good one for the city. This attempt will be made since a large enough segment of positive votes in the city on a potential ballot question could overrule the negative vote on the part of township residents. I