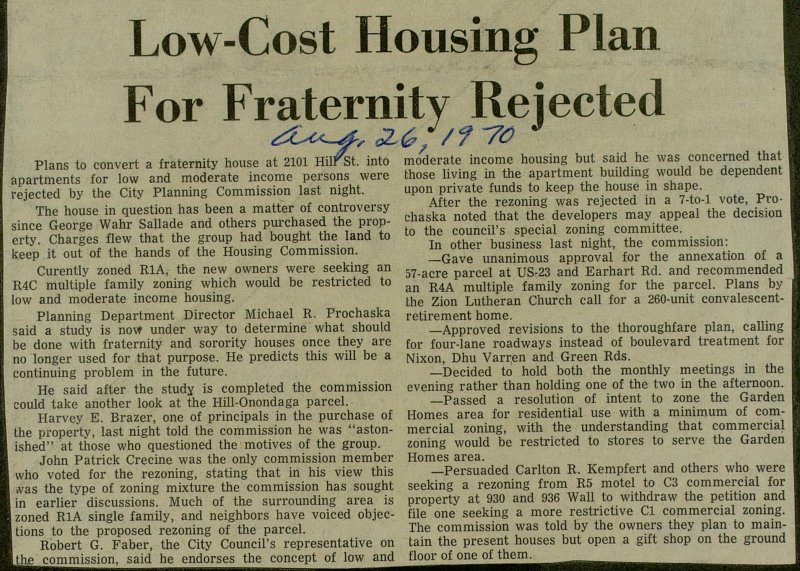 Plans to convert a fraternity house at 2101 HilrSt. into apartments for low and moderate income persons were rejected by the City Planning Commission last night. The house in question has been a matter of controversy since George Wahr Sallade and others purchased the property. Charges flew that the group had bought the land to keep it out of the hands of the Housing Commission. Curently zoned RÍA, the new owners were seeking an R4C multiple family zoning which would be restricted to low and moderate income housing. Planning Department Director Michael R. Prochaska said a study is no under way to determine what should be done with fraternity and sorority houses once they are no longer used for that purpose. He predicts this will be a continuing problem in the future. He said after the study is completed the commission could take another look at the Hill-Onondaga parcel. Harvey E. Brazer, one of principáis in the purchase of the property, last night told the commission he was "astonished" at those who questioned the motives of the group. John Patrick Crecine was the only commission member who voted for the rezoning, stating that in his view this was the type of zoning mixture the commission has sought I in earlier discussions. Much of the surrounding area is I zoned RÍA single family, and neighbors have voiced objecItions to the proposed rezoning of the parcel. Robert G. Faber, the City Council's representative on Ihip commission. said he endorses the concept of low and moderate income housing but said he was concerned that those living in the apartment building would be dependent J upon private funds to keep the house in shape. After the rezoning was rejected in a 7-to-l vote, Prochaska noted that the developers may appeal the decisión to the council's special zoning committee. In other business last night, the commission: Gave unanimous approval for the annexation of a 57-acre parcel at US-23 and Earhart Rd. and recommended an R4A multiple family zoning for the parcel. Plans by the Zion Lutheran Church cali for a 260-unit convalescentretirement home. - Approved revisions to the thoroughfare plan, calling for four-lane roadways instead of boulevard treatment for Nixon, Dhu Varren and Green Rds. - Decided to hold both the monthly meetings in the evening rather than holding one of the two in the afternoon. - Passed a resolution of intent to zone the Garden Homes área for residential use with a minimum of commercial zoning, with the understanding that commercial zoning would be restricted to stores to serve the Garden Homes area. - Persuaded Carlton R. Kempfert and others who were seeking a rezoning from R5 motel to C3 commercial for property at 930 and 936 Wall to withdraw the petition and file one seeking a more restrictive Cl commercial zoning. The commission was told by the owners they plan to maintain the present houses but open a gift shop on the ground floor of one of them. ■