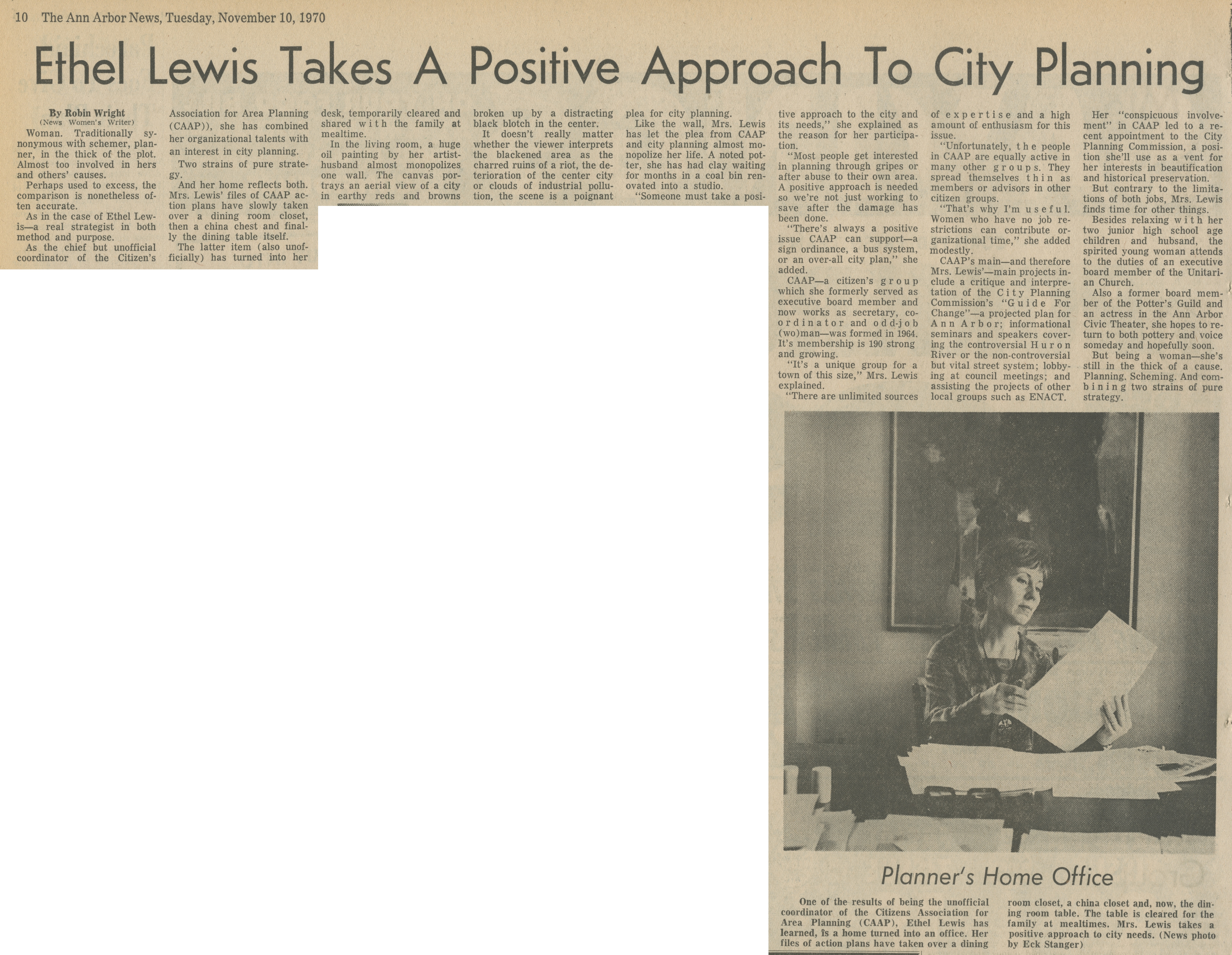 Woman. Traditionally synonymous with schemer, planner, in the thick of the plot. Almost too involved in hers and others' causes. Perhaps used to excess, the comparison is nonetheless often accurate. As in the case of Ethel Lewis - a real strategist in both method and purpose. As the chief but unofficial coordinator of the Citizen's Association for Area Planning (CAAP)), she has combined her organizational talents with an interest in city planning. Two strains of pure strategy. And her home reflects both. Mrs. Lewis' files of CAAP action plans have slowly taken over a dining room closet, then a china chest and finally the dining table itself. The latter item (also unofficially) has turned into her desk, temporarily cleared and shared with the family at mealtime. In the living room, a huge oil painting by her artist-husband almost monopolizes one wall. The canvas portrays an aerial view of a city in earthy reds and browns broken up by a distracting black blotch in the center. It doesn't really matter whether the viewer interprets the blackened area as the charred ruins of a riot, the deterioration of the center city or clouds of industrial pollution, the scene is a poignant plea for city planning. Like the wall, Mrs. Lewis has let the plea from CAAP and city planning almost monopolize her life. A noted potter, she has had clay waiting for months in a coal bin renovated into a studio. "Someone must take a positive approach to the city and its needs," she explained as the reason for her participation. "Most people get interested in planning through gripes or after abuse to their own area. A positive approach is needed so we're not just working to save after the damage has been done. "There's always a positive issue CAAP can support - a sign ordinance, a bus system, or an over-all city plan," she added. CAAP- a citizen's group which she formerly served as executive board member and now works as secretary, coordinator and odd-job (wo)man - was formed in 1964. It's membership is 190 strong and growing. "It's a unique group for a town of this size," Mrs. Lewis explained. "There are unlimited sources of expertise and a high amount of enthusiasm for this issue. "Unfortunately, the people in CAAP are equally active in many other groups. They spread themselves thin as members or advisors in other citizen groups. "That's why I'm usefu1. Women who have no job restrictions can contribute organizational time," she added modestly. CAAP's main - and therefore Mrs. Lewis' - main projects include a critique and interpretation of the City Planning Commission's "Guide For Change" - a projected plan for Ann Arbor; informational seminars and speakers covering the controversial Huron River or the non-controversial but vital street system; lobbying at council meetings; and assisting the projects of other local groups such as ENACT. Her "conspicuous involvement" in CAAP led to a recent appointment to the City Planning Commission, a position she'll use as a vent for her interests in beautification and historical preservation. But contrary to the limitations of both jobs, Mrs. Lewis finds time for other things. Besides relaxing with her two junior high school age children and husband, the spirited young woman attends to the duties of an executive board member of the Unitarian Church. Also a former board member of the Potter's Guild and an actress in the Ann Arbor Civic Theater, she hopes to return to both pottery and voice someday and hopefully soon. But being a woman - she's still in the thick of a cause. Planning. Scheming. And combining two strains of pure strategy.