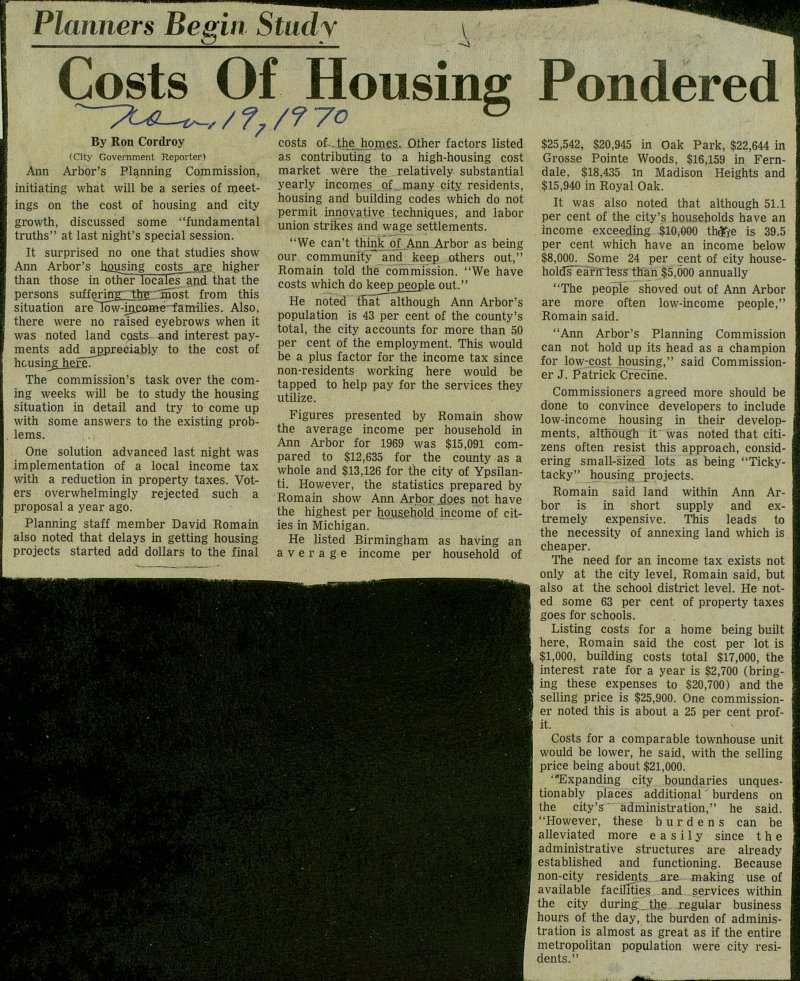 Ann Arbor's Planning Commission, initiating what will be a series of meetings on the cost of housing and city growth, discussed some "fundamental truths" at last night's special session. It surprised no one that studies show Ann Arbor's housing costs are higher than those in other locales and that the persons suffering the most from this situation are low income families. Also, there were no raised eyebrows when it was noted land costs and interest payments add appreciably to the cost of housing here. The commission's task over the coming weeks will be to study the housing situation in detail and try to come up with some answers to the existing problems. One solution advanced last night was implementation of a local income tax with a reduction in property taxes. Voters overwhelmingly rejected such a proposal a year ago. Planning staff member David Romain also noted that delays in getting housing projects started add dollars to the final costs of the homes. Other factors listed as contributing to a high-housing cost market were the relatively substantial yearly incomes of many city residents, housing and building codes which do not permit innovative techniques, and labor union strikes and wage settlements. "We can't think of Ann Arbor as being our community and keep others out," Romain told the cömmission. "We have costs which do keep people out." He noted that although Ann Arbor's population is 43 per cent of the county's total, the city accounts for more than 50 per cent of the employment. This would be a plus factor for the income tax since non-residents working here would be tapped to help pay for the services they utilize. Figures presented by Romain show the average income per household in Ann Arbor for 1969 was $15,091 compared to $12,635 for the county as a whole and $13,126 for the city of Ypsilanti. However, the statistics prepared by Romain show Ann Arbor does not have the highest per household income of cities in Michigan. He listed Birmingham as having an average income per household of $25,542, $20,945 in Oak Park, $22,644 in Grosse Pointe Woods, $16,159 in Ferndale, $18,435 in Madison Heights and $15,940 in Royal Oak. It was also noted that although 51.1 per cent of the city's households have an income exceeding $10,000 there is 39.5 per cent which have an income below $8,000. Some 24 percent of city households earn less than $5,000 annually "The people shoved out of Ann Arbor are more often low-income people," Romain said. "Ann Arbor's Planning Commission can not hold up its head as a champion for low-cost housing," said Commissioner J. Patrick Crecine. Commissioners agreed more should be done to convince developers to include low-income housing in their developments, although it was noted that citizens often resist this approach, considering small-sized lots as being "Ticky-tacky" housing projects. Romain said land within Ann Arbor is in short supply and extremely expensive. This leads to the necessity of annexing land which is cheaper. The need for an income tax exists not only at the city level, Romain said, but also at the school district level. He noted some 63 per cent of property taxes goes for schools. Listing costs for a home being built here, Romain said the cost per lot is $1,000, building costs total $17,000, the interest rate for a year is $2,700 (bringing these expenses to $20,700) and the selling price is $25,900. One commissioner noted this is about a 25 per cent profit. Costs for a comparable townhouse unit would be lower, he said, with the selling price being about $21,000. "Expanding city boundaries unquestionably places additional burdens on the city's administration," he said. "However, these burdens can be alleviated more easi1y since the administrative structures are already established and functioning. Because non-city residents making use of available facilities and services within the city during the regular business hours of the day, the burden of administration is almost as great as if the entire metropolitan population were city residents."