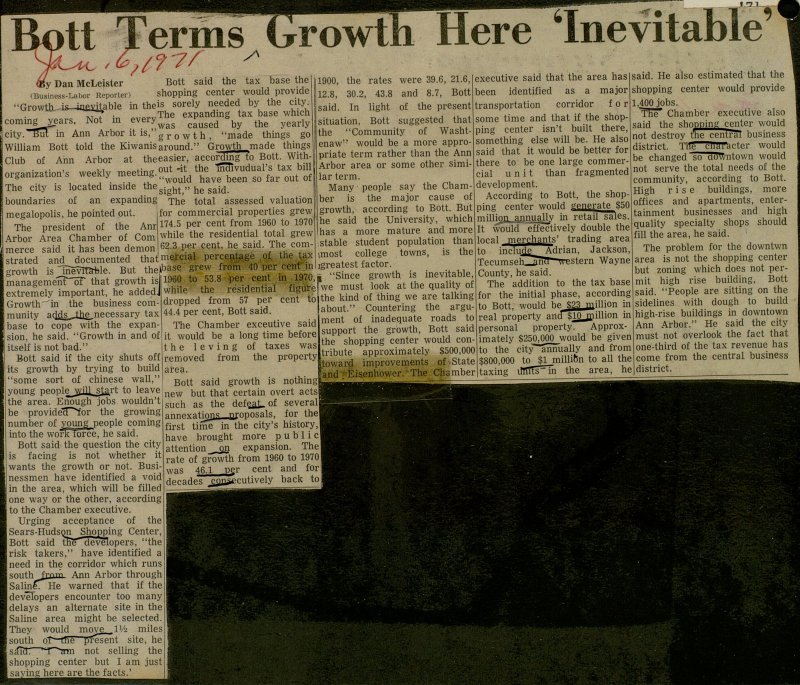 "Growth is- infiïiable in the1 :omingyears. Not in every cily."Bur"in Ann Arbor it is," William Bott told the Kiwanis Club of Ann Arbor at the arganization's weekly meeting. The city is located inside the boundaries of an expanding megalopolis, he pointed out. The president of the Anr Arbor Area Chamber of Com merce said it has been demon strated and documented that growth is Tnëvïtable. But the managemeniöT that growth is extremely important, he addecL Growth "in the business community addsJlie necessary tax base to cope with the expansión, he said. "Growth in and of itself is not bad." Bott said if the city shuts off its growth by trying to build "some sort of chínese wall," young peoplp_yi1] stSrt to leave the area. Enough jobs wouldn't be provideTPfor the growing number of yomigpeople coming into the workTórce, he said. Bott said the question the city is facing is not whether it wants the growth or not. Businessmen have identified a void in the area, which will be filled one way or the other, according to the Chamber executive. Urging acceptance of the Sears-Hudson Shopping Center, Bott said the" developers, "the risk takers," have identified a need in the corridor which runs south frxuá. Aun Arbor through SalinéHe warned that if the devêTopers encounter too many delays an altérnate site in the Saline área might be selected. They wouldmove_l12 miles south oT- ffië pfésent site, he sáT Tn not selling the shopping center but I am just saying here are the facts.' Bott said the tax base the shopping center would provide is sorely needed by the city. The expanding tax base which was caused by the yearly growth, "made things go around." Growth made things easier, according to Bott. Without -it the "mcTivudual's tax bill "would have been so far out of sight," he said. The total assessed valuation for commercial properties grew 174.5 per cent from 1960 to 1970 while the residential total grew 62.3 per cent, he said. The commercial percentaje of the tax base grew from 40 per cent in 1960 to 53.8 per cent in 1970, while the residential figure iropped f rom 57 per cent tol 14.4 per cent, Bott said. The Chamber exceutive said it would be a long time before the 1 e v i n g of taxes was removed from the property área. Bott said growth is nothing new but that certain overt acts! such as the defect, of several annexatioflL__sroposals, for the first time in the city's history, have brought more public attention_pji expansión. The rate of growth from 1960 to 1970 was 46.1 per cent and for decades _Lflnsgcutively back to 1900, the rates were 39.6, 21.6, 12.8, 30.2, 43.8 and 8.7, Bott said. In light of the present situation, Bott suggested that the "Community of Washtenaw" would be a more appropriate term rather than the Ann Arbor área or some other similar term. Many people say the Chamber is the major cause of growth, according to Bott. But he said the University, which has a more mature and more stable student population than imost college towns, is the igreatest factor. i "Since growth is inevitable, [we must look at the quality of the kind of thing we are talking about." Countering the argu ment of inadequate roads to support the growth, Bott said Ithe shopping center would con Itribute approximately $500,000 Itoward improvemenls of-State land Eisenhower. The Chamber i : I - . - „xecutive said that the área has been identified as a major ransportation corridor f o r some time and that if the shop)ing center isn't built there, something else will be. He also said that it would be better for there to be one large commercial unit than fragmented development. According to Bott, the shopping center would genérate $50 millioiLJUinually in retail sales. ii would cffectively doublé the ocal merchants' trading area ío include Adrián, Jackson, TecumsehüaiiU western Wayne County, he said. The addition to the tax base for the initial phase, according to Bott, would be $22Jüillion in real property and" $10 million in personal property. Approximately $250,000 would be given to the city aññlially and from $800,000 to $1 milliftn to all the taxing imits in the area, he aid. He also estimated that the ' shopping center would provide 1,400 jobs. Tïïë Chamber executive also said the shopping center would not destroy fhe central business district. THe cllül'acter would )e changed so aowntown would not serve the total needs of the community, according to Bott. High r i s e buildings, more offices and apartments, enter;ainment businesses and high quality specialty shops should fill the área, he said. The problem for the downtwn area is not the shopping center but zoning which does not permit high rise building, Bott said. "People are sitting on the sidelines with dough to build high-rise buildings in downtown Ann Arbor." He said the city must not overlook the fact that one-third of the tax revenue has come from the central business district.