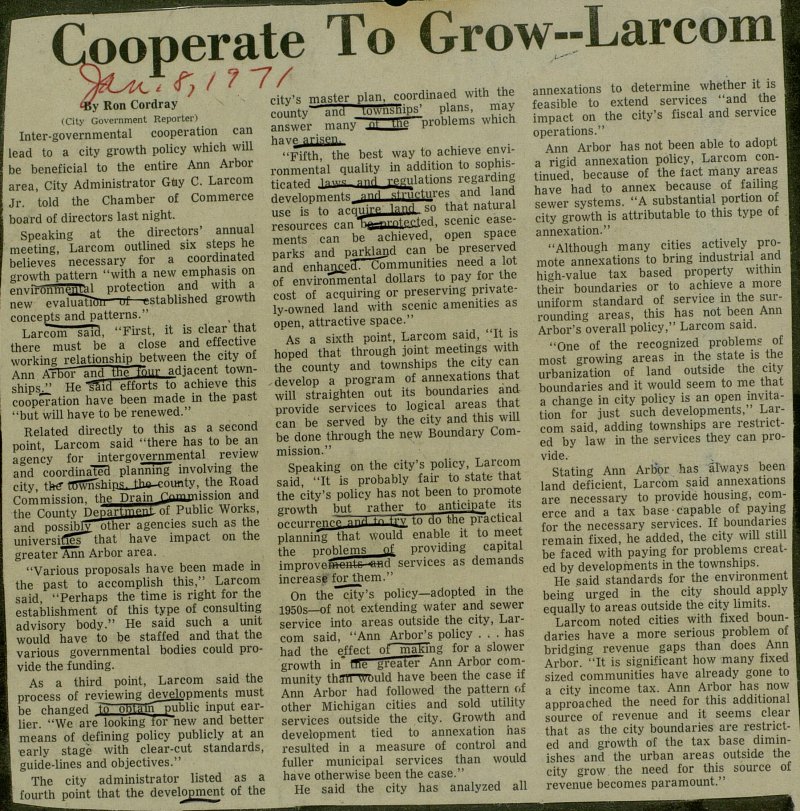 Inter-governmental cooperation can lead to a city growth policy which will be beneficial to the entire Arm Arbor area, City Administrator Guy C. Larcom Jr. told the Chamber of Commerce board of directors last night. Speaking at the directors' annual meeting, Larcom outlined six steps he believes necessary for a coordinated growth pattern "with a new emphasis on environmental protection and with a new evaluation of established growth concepts and patterns." Larcom said, "First, it is clear that there must be a close and effective working relationship between the city oi Ann ami thTTour adiacent townships." He "sficTëfforts to achieve this cooperation have been made in the past "but will have to be renewed." Related directly to this as a second point, Larcom said "there has to bean agency for intergovernmental review and coordinated planning involving the city, the townships, the county, the Road Commission, the Drain Commission and the County Department-of Public Works, and possible other agencies such as the universities that have impact on the greater Ann Arbor area. "Various proposals have been made in the past to accomplish this," Larcom said, "Perhaps the time is right for the establishment of this type of consulting advisory body." He said such a unit would have to be staffed and that the various governmental bodies could provide the funding. As a third point, Larcom said the process of reyiewing developments must be changed To' obta'in" public input earlier. "We are looking for new and better means of defining policy publicly at an I early stage with clear-cut standards, I guide-lines and objectives." The city administrator usted as a Ifourth point that the development of the city's master plan, coordinaed with the county and townsfiips' plans, may answer n,m ot thT-problems which havp grisen. "Fifth, the best way to achieve environmental quality in addition to sophisticated I""" anrl regulations regarding developments-amL_5lüiLÜires and }aïld, use is to ar-mnjp land so that natural resources canTSjöSffüiSfiled, scenic easements can be achieved, open space parks and parkland can be preserved and enhancecT'Cbmmunities need a lot of environmental dollars to pay for the cost of acquiring or preserving pnvately-owned land with scenic amemües as open, attractive space." As a sixth point, Larcom said, "It is hoped that through joint meetings with the county and townships the city can develop a program of annexations that will straighten out its boundanes and provide services to logical areas that can be served by the city and this will be done through the new Boundary Commission." Speaking on the city's policy, Larcom said, "It is probably fair to state that the city's policy has not been to promote growth but 'rather to anticípate its nrni--onrw. flpri tn iry in do tne practical planning that would enable it to meet the rnhlems of providing capital improvemëfitëBcl services as demands increase for them." On the city's policy- adopted in the 1950S- of not extending water and sewer service into areas outside the city, Larcom said, "Ann Arbors policy ... has had the effect of makïng for a slower growth in ffle greateT Ann Arbor community thaTTwtiuld have been the case if Ann Arbor had f olio wed the pattern of other Michigan cities and sold utility services outside the city. Growth and development tied to annexation has resulted in a measure of control and fuller municipal services than would have otherwise been the case." He said the city has analyzed all annexations to determine whether it is I feasible to extend services "and the I impact on the city's fiscal and service I operations." Ann Arbor has not been able to adopt I a rigid annexation policy, Larcom I tinued because of the fact many áreas I have had to annex because of failing I sewer systems. "A substantial portion of city growth is attributable to this type of annexation." "Although many cities actively promote annexations to bring industrial and hih-value tax based property within their boundaries or to achieve a more uniform standard of service in the surrounding áreas, this has not been Ann Arbor's overall policy," Larcom said. "One of the recognized problems of ] most growing areas in the state is the urbanization of land outside the city boundaries and it would seem to me that a change in city policy is an open ïnvitation for just such developments, Larcom said, adding townships are restricted by law in the services they can provide. Stating Ann Arbor has ál'ways been land deficiënt, Larcom said annexations are necessary to provide housing, comerce and a tax basecapable of paymg for the necessary services. If boundaries remain fixed, he added, the city will still be faced with paying for problems created by developments in the townships. He said standards for the environment being urged in the city should apply equally to areas outside the city limits. Larcom noted cities with fixed boundaries have a more serious problem of bridging revenue gaps than does Ann Arbor. "It is significant how many fixed sized communities have already gone to a city income tax. Ann Arbor has now approached the need for this additional source of revenue and it seems clear that as the city boundaries are restricted and growth of the tax base diminishes and the urban areas outside the city grow the need for this source of revenue becomes paramount."