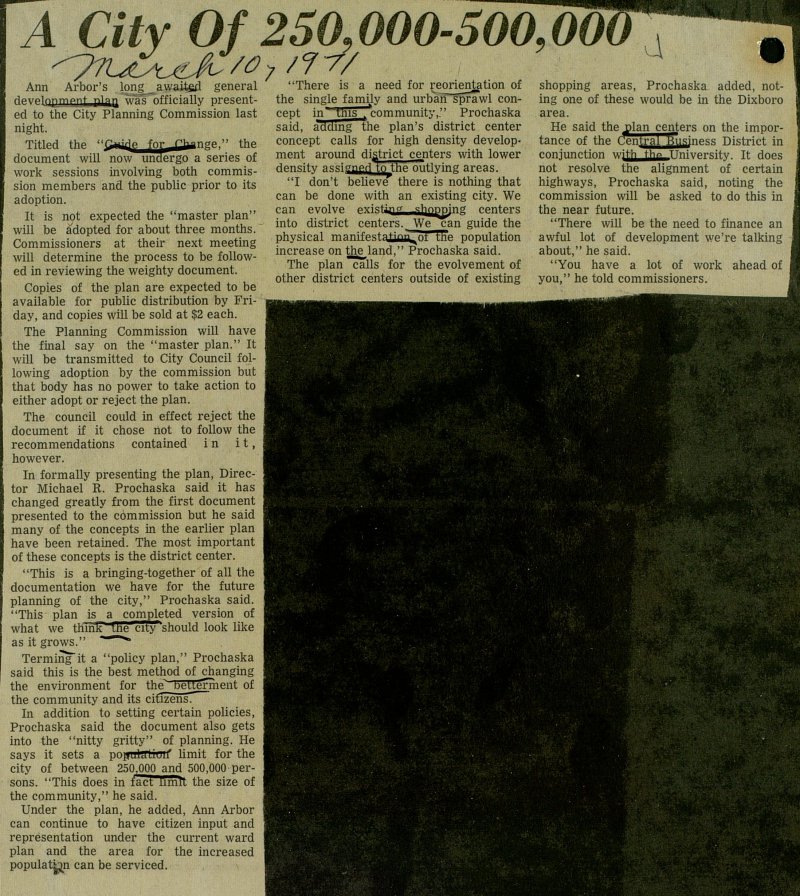 Ann Arbor's Ion awaitgd general develüBÍOeaLjjJda wasTbfficially presented to the City Planning Commission last night. Titled the " f"y rtnap " the document will now undergo a series of work sessions involving both commission members and the public prior to its adoption. It is not expected the "master plan" will be adopted for about three months. Commissioners at their next meeting will determine the process to be followed in reviewing the weighty document. Copies of the plan are expected to be available for public distribution by Friday, and copies will be sold at $2 each. The Planning Commission will have the final say on the "master plan." It will be transmitted to City Council following adoption by the commission but that body has no power to take action to either adopt or reject the plan. The council could in effect reject the document if it chose iiot to follow the recommendations contained in i t , however. In formally presenting the plan, Director Michael R. Prochaska said it has changed greatly from the first document presented to the commission but he said many of the concepts in the earlier plan have been retained. The most important of these concepts is the district center. "This is a bringing-together of all the documentation we have for the future planning of the city," Prochaska said. "This plan is a completed version of what we thinKthe city should look like as it grows." Termiñg"it a "policy plan," Prochaska said this is the best methodofchanging the environment for the" oeue'rment of the community and its ciüzens. In addition to setting certain policies, Prochaska said the document also gets into the "nitty gritty" of planning. He says it sets a pojsulffüuif limit for the city of between 250,000 and 500,000 persons. "This does in fact limit the size of the community," he said. Under the plan, he added, Ann Arbor can continue to have citizen input and representation under the current ward plan and the area for the increased populatjjn can be serviced. "There is a need for reorientation of the single family and urban sprawl concept in tnis . community,-" Prochaska said, adding the plan's district center concept calis for high density development around district centers with lower density assisnerl t;9jthe oütlying areas. "I don't believe there is nothing that can be done with an existing city. We can evolve existías.. Jjojjjjjng centers into district centers. We can guide the physical manifestaüflaofüTe population increase on thje land," Prochaska said. The plan calis for the evolvement of other district centers outside of existing shopping áreas, Prochaska added, noting one of these would be in the Dixboro area. He said the plan centers on the importance of the Central Business District in COnjunction wit-h Hip TTnivprsitv ft does not resolve the alignment of certain highways, Prochaska said, noting the commission will be asked to do this in the near future. "There will be the need to finance an awful lot of development we're talking , about," he said. "You have a lot of work ahead of I you," he told commissioners.