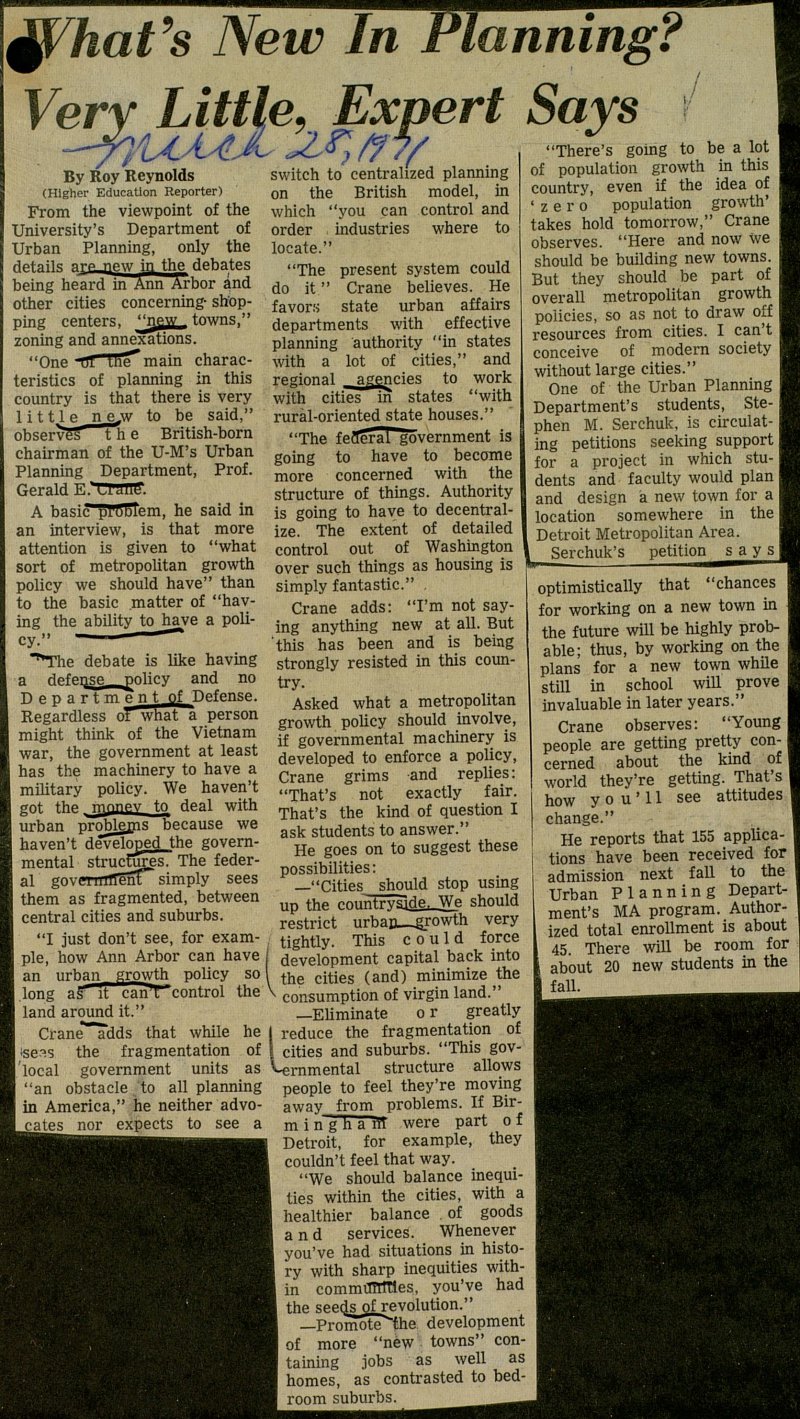 From the viewpoint of the University's Department of Urban Planning, only the details axfijjewintiie debates being heard in Ann Arbor and other cities sh'opping centers, iiga,, towns," zoning and annexations. "One -01 themain characteristics of planning in this country is that there is very 1 i 1 1 1 e n eyf to be said," observes th e British-born chairman of the U-M's Urban Planning Department, Prof. Gerald E." tralie". A basicWBTem, he said in an interview, is that more attention is given to "what sort of metropolitan growth policy we should have" than to the basic matter of "having the ability to have a poliThe debate is like having a defense Lolicy and no Departm ent of Defense. Regardless oF what a person might think of the Vietnam war, the government at least has the machinerv to have a military policy. We haven't got t.hp jnnfiv to deal with urban problejns because we haven't developed the governmental strucEurLsT The federal govermffënt simply sees them as fragmented, between central cities and suburbs. "I just don't see, for example, how Ann Arbor can have I an urban growth policy so long as it can't control the land around it." CraneTdds that while he se'.s the fragmentation of 'local government units as "an obstacle to all planning in America," he neither advocates nor expects to see a y ' f switch to centralized planning on the British model, in which "you can control and order industries where to lócate." "The present system could do it " Crane believes. He favors state urban affairs departments with effective planning authority "in states with a lot of cities," and regional agencies to work with cities in states "with rurál-oriented state houses." "The feöTeral government is going to have to become more concerned with the structure of things. Authority is going to have to decentralize. The extent of detailed control out of Washington over such things as housing is simply fantastic." Crane adds: "I'm not saying anything new at all. But this has been and is being strongly resisted in this country. Asked what a metropolitan growth policy should involve, if governmental machinery is developed to enforce a policy, Crane grims and replies: "That's not exactly fair. That's the kind of question I ask students to answer." He goes on to suggest these possibilities: - "Cities should stop using up the countrysadeJ_We should restrict urban growth very tightly. This c o u 1 d force development capital back into the cities (and) minimize the v consumption of virgin land." - Eliminate o r greatly I reduce the fragmentation of I cities and suburbs. "This govWnmental structure allows people to feel they're moving away from problems. If Birm i n g ha ffl were part o f Detroit, for example, they couldn't feel that way. "We should balance inequities within the cities, with a healthier balance . of goods and services. Whenever you've had situations in history with sharp inequities within commüMÜes, you've had the seeds ol revolution." _Promotê"the development of more "néw towns" containing jobs as well as homes, as contrasted to bedroom suburbs. M "There's going to be a lot of population growth in this country, even if the idea of ' z e r o population growth' takes hold tomorrow," Crane observes. "Here and now we should be building new towns. But they should be part of overall metropolitan growth policies, so as not to draw off resources from cities. I can't conceive of modern society without large cities." One of the Urban Planning Department's students, Stephen M. Serchuk, is circulating petitions seeking support for a project in which students and faculty would plan and design á new town for a location somewhere in the Detroit Metropolitan Area. Serchuk's petition s a y s optimistically that "chances for working on a new town in the future will be highly probable; thus, by working on the plans for a new town while still in school will prove invaluable in later years." j Crane observes: "Young people are getting pretty concerned about the kind of world they're getting. That's I how y o u ' 1 1 see attitudes change." He reports that 155 applications have been received for admission next fall to the Urban Planning Department' s MA program. Authorized total enrollment is about 45. There will be room for i about 20 new students in the fall.