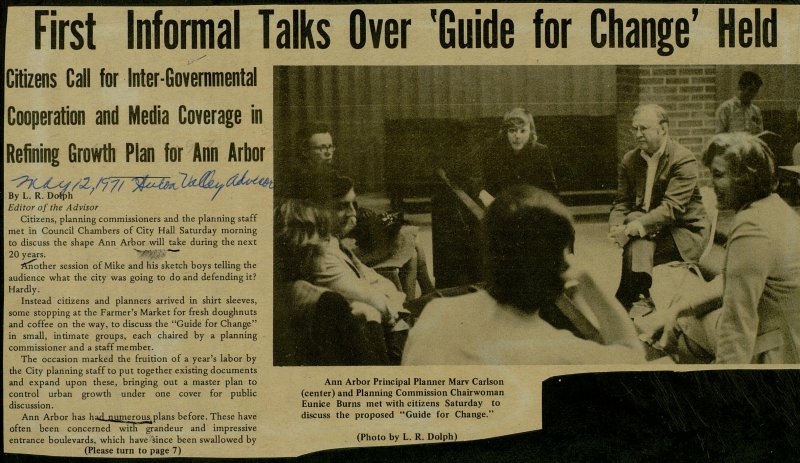 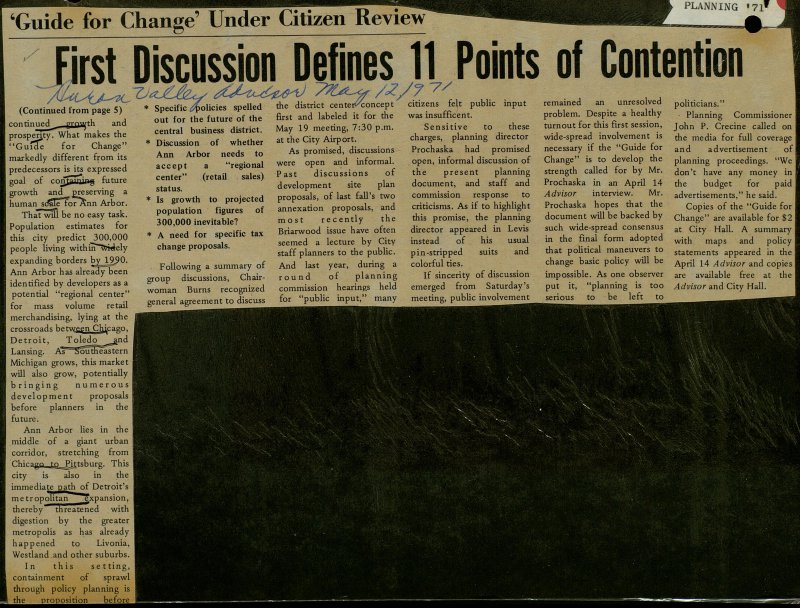 Citizens, planning commissioners and the planning staff met in Council Chambers of City Hall Saturday morning to discuss the shape Ann Arbor will take during the next 20years. -v-,,'7 - ííñother scssion of Mike and his sketch boys telling the audience what the city was going to do and defending it? Hardly. Instead citizens and planners arrived in shirt sleeves, some stopping at the Farmer's Market for fresh doughnuts and coffee on the way, to discuss the "Guide for Change" in small, intimate groups, each chaired by a planning commissioner and a staff member. The occasion marked the fruition of a year's labor by the City planning staff to put together existing documents and expand upon these, bringing out a master plan to control urban growth under one cover for public discussion. Ann Arbor has hadjnurnerous plans before. These have often been concerned witn grandeur and impressive entrance boulevards, which have since been swallowed by (Please turn to page 7) 'Guide for Change' Under Citizen Review First Discussion Defines 11 Points of Contention (Continued from page 5) continued grfmft.h and prosperity. What makes the "Guíele for Change" markedly different from its predecessors is its expressed goal of conjaiaiög future growth and preserving a human sdaleiorAnn Arbor. That will be no easy task. Population estimates for this city predict 300,000 people living within"iely expanding borders byj.90. Ann Arbor has alreaSy been identified by developers as a potential "regional center" for mass volume retail merchandising, lying at the crossroads betwgnChJcago, , Detroit, Toledo___!and Lansing. As 5outn"èastern I Michigan grows, this market j will also grow, potentially I bringing numerousl development proposals I before planners in the I future. Ann Arbor lies in the I middle of a giant urban I corridor, stretching from j ChicagLuQ_Pittsburg. This city is also in the immediate ftath of Detroit's metropolitan expansión, thereby" threatened with digestión by the greater metropolis as has already happened to Livonia, Westland and other suburbs. In this se t ting, containment of sprawl through policy planning is the Drooosition before Specific Molicies spelled out for the future of the central business district. Discussion of whether Ann Arbor needs to accept a "regional center" (retail sales) status. Is growth to projected population figures of 300,000 inevitable? A need for specific tax change proposals. Following a summary of group discussions, Chairwoman Burns recognized general agreement to discuss the district centerconcept first and labeled it for the May 19 meeting, 7:30 p.m. at the City Airport. As promised, discussions were open and informal. Past discussions of development site plan proposals, of last fall's two annexation proposals, and most recently the Briarwood issue have often seemed a lecture by City staff planners to the public. And last year, during a round of planning commission hearings held for "public input," many citizens feit public input was insufficent. Sensitive to these charges, planning director Prochaska had promised open, informal discussion of the present planning document, and staff and commission response to criticisms. As if to highlight this promise, the planning director appeared in Levis instead of his usual pin-stripped suits and colorful ties. If sincerity of discussion emerged from Saturday's meeting, public involvement remained an unresolved problem. Despite a healthy turnout for this first session, wide-spread involvement is necessary if the "Guide for Change" is to develop the strength called for by Mr. Prochaska in an April 14 Advisor interview. Mr. Prochaska hopes that the document will be backed by such wide-spread consensus in the final form adopted that political maneuvers to change basic policy will be impossible. As one observer put it, "planning is too serious to be left to politicians." Planning Commissioner John P. Crecine called on the media for full coverage and advertisement of planning proceedings. "We don 't have any money in the budget for paid advertisements," he said. Copies of the "Guide for Change" are available for $2 at City Hall. A summary with maps and policy statements appeared in the April 14 Advisor and copies are available f re e at the Advisor and City Hall. discussionsv Notorious examples of urbarfsprawl already exist along, Washtenaw andStadium Blvds. The discussions might be likened t5 a cuwnneeting to organize a dëfense against hostile Indians. Saturday's meeting produced a gratifying turnout, according to planning director Michael Prochaska and planning commission chairwoman Eunice Burns. Nearly 50 were present for the prelimiary discussion. But everyone expressed hope for more participation in the future. Several points of discussion were identified by the participants after holding three smaller group I sessions. These were grouped into 11 basic points of contention: Doubts of feasibility of implementing the district center concept. Problems of narrowing the complex "Guide for Change" into fruitful discussion without proceeding chapter-bychapter in a monthsconsuming process. A need for stronger and E more elabórate policy on I the existing city. A stronger statement of I communication with I other governmental units I within the area. A need for specific ratios I of land use within district I centers. Broader coverage andl interest by newspapersl and radio. More demographic datal for reference. ï