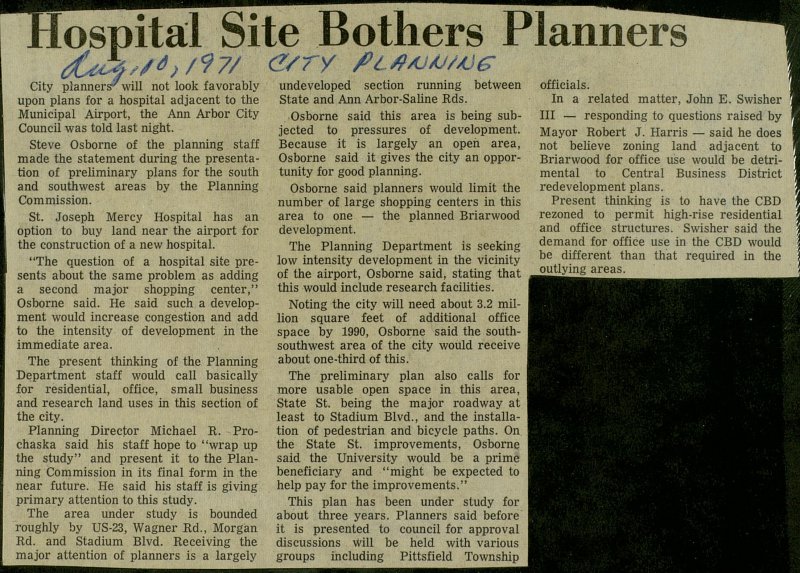 City planners' will not look favorably upon plans for a hospital adjacent to the Municipal Airport, the Ann Arbor City Council was told last night. Steve Osborne of the planning staff made the statement during the presentation of preliminary plans for the south and southwest areas by the Planning Commission. St. Joseph Mercy Hospital has an option to buy land near the airport for the construction of a new hospital. "The question of a hospital site presents about the same problem as adding a second major shopping center," Osborne said. He said such a development would increase congestión and add to the intensity of development in the immediate area. The present thinking of the Planning Department staff would cali basically for residential, office, small business and research land uses in this section of the city. Planning Director Michael R. Prochaska said his staff hope to "wrap up the study" and present it to the Planning Commission in its final form in the near future. He said his staff is giving primary attention to this study. The area under study is bounded roughly by US-23, Wagner Rd., Morgan Rd. and Stadium Blvd. Receiving the major attention of planners is a largely undeveloped section running between State and Ann Arbor-Saline Rds. Osborne said this area is being subjected to pressures of development. Because it is largely an open area, Osborne said it gives the city an opportunity for good planning. Osborne said planners vvould limit the number of large shopping centers in this area to one - the planned Briarwood development. The Planning Department is seeking low intensity development in the vicinity of the airport, Osborne said, stating that this would include research facilities. Noting the city will need about 3.2 million square feet of additional office space by 1990, Osborne said the southsouthwest area of the city would receive about one-third of this. The preliminary plan also calis for more usable open space in this area, State St. being the major roadway at least to Stadium Blvd., and the installation of pedestrian and bicycle paths. On the State St. improvements, Osborne said the University would be a prime beneficiary and "might be expected to help pay for the improvements." This plan has been under study for about three years. Planners said before it is presented to council for approval discussions will be held with various groups including Pittsfield Township oiiicials. In a related matter, John E. Swisher III - responding to questions raised by Mayor Robert J. Harris - said he does not believe zoning land adjacent to Briarwood for office use would be detrimental to Central Business District redevelopment plans. Present thinking is to have the CBD rezoned to permit high-rise residential and office structures. Swisher said the demand for office use in the CBD would be different than that required in the outlying areas.