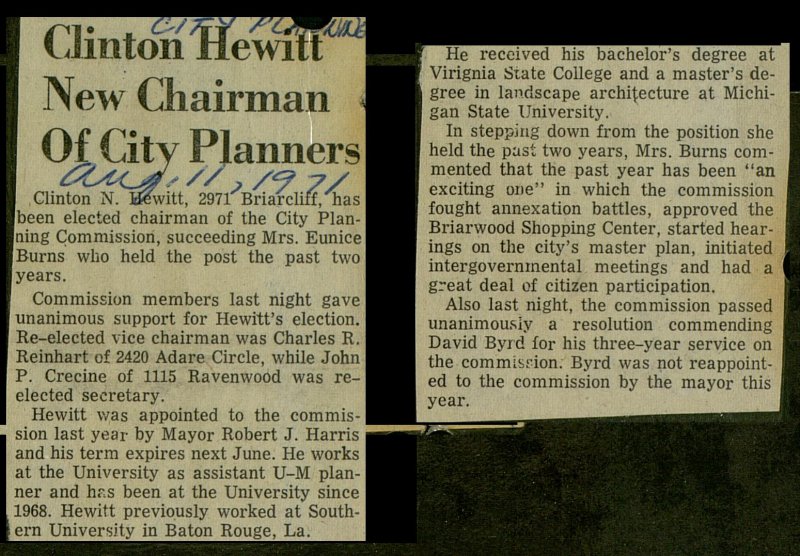 I Clinton N. Hewitt, 2971 Briarcliff, has [been elected chairman of the City 1 Ining Commission, succeeding Mrs. Eunicel Burns who held the post the past two I years. I Commission members last night gave I unanimous support for Hewitt's election. I Re-elected vice chairman was Charles R. I Reinhart of 2420 Adare Circle, while John I P. Crecine of 1115 Ravenwood was 1 elected secretary. I Hewitt was appointed to the 1 sion last year by Mayor Robert J. Harris i and his term expires next June. He works I at the University as assistant U-M 1 ner and has been at the University since I 1968. Hewitt previously worked at 1 ern University in Baton Rouge, La. I Ï He reccived his bachelor's degree at I Virignia State College and a master's deI gree in landscape architecture at MichiI gan State University. ín steppmg down from the position she I held the past two years, Mrs. Burns comI mented that the past year has been "an I I exciting one" in which the commission I fought annexation battles, approved the I Briarwood Shopping Center, started I ings on the city's master plan, initiated I intergovernmental meetings and had a I great deal of citizen participation. Also last night, the commission passed I unanimousiy a resolution commending I David Byrd íor his three-year service on I the commísrion. Byrd was not I ed to the commission by the mayor this I year.