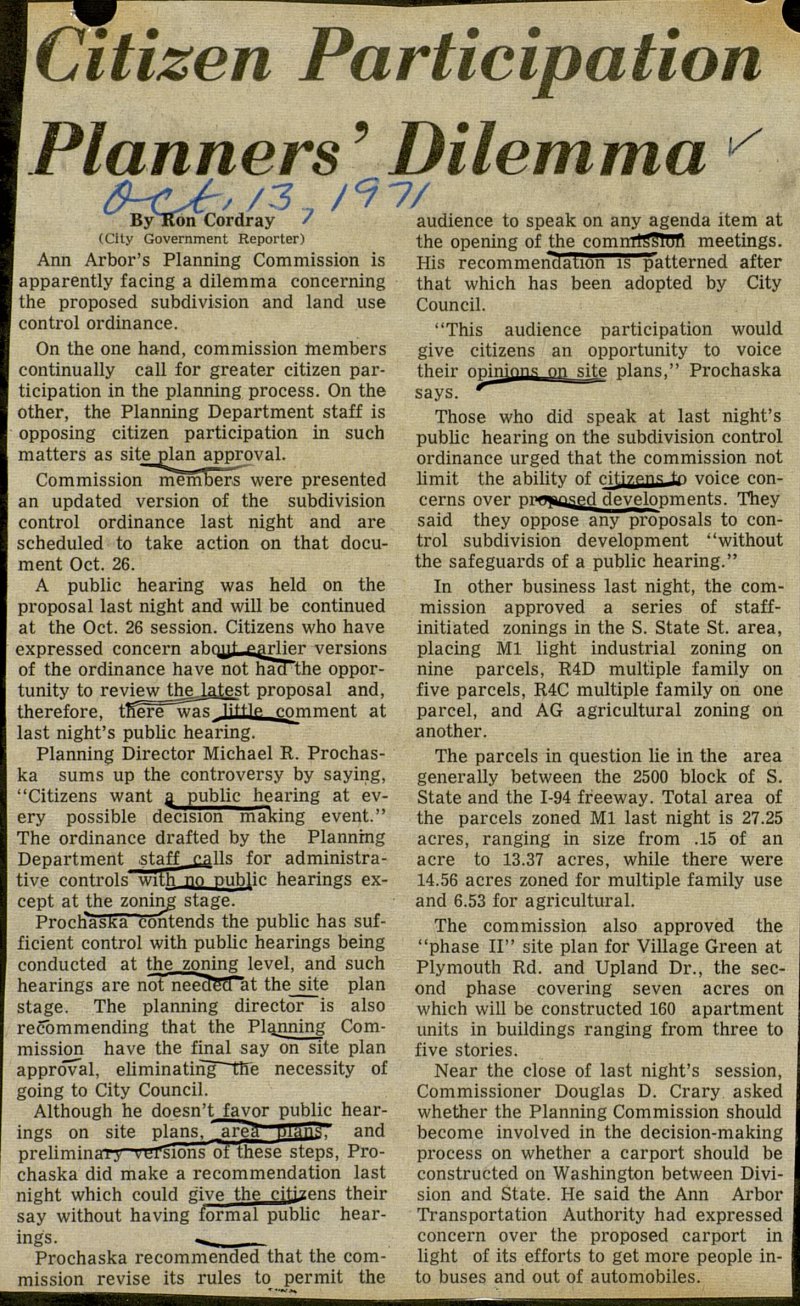 Ann Arbor's Planning Commission is apparently facing a dilemma concerning the proposed subdivisión and land use control ordinance. On the one hand, commission members continually cali for greater citizen participation in the planning process. On the other, the Planning Department staff is opposing citizen participation in such matters as site plan approval. Commission in ëmberiwere presented an updated version of the subdivisión control ordinance last night and are scheduled to take action on that document Oct. 26. A public hearing was held on the proposal last night and will be continued at the Oct. 26 session. Citizens who have expressed concern abcmLegrlier versions of the ordinance have not had the opportunity to reviewjhejatgst proposal and, therefore, tWprp wa: littlft rnrnmpnt at last night's public hearing. Planning Director Michael R. Prochaska sums up the controversy by saying, "Citizens want a public hearing at every possible decisión making e vent." The ordinance drafted by the Planning Denartment staff calis for administrative controls with no public hearings except at the zoning stage. ProchVská contends the public has sufficient control with public hearings being conducted at the zoning level, and such hearings are nöf neécfetTat the_site plan stage. The planning director is also recömmending that the Planning Commission have the final say on site plan approval, eliminatiñgtn"e necessity of going to City Council. Although he doesn't favor public hearings on site plans, área piai's1. and preliminar vtífsions of these steps, Prochaska did make a recommendation last night which could eive the citizens their say without having formal public hearings. Prochaska recommended that the commission revise its rules to permit the audience to speak on any agenda item at the opening of thecomnrtSSTOn meetings. His recommenciahon is patterned after that which has been adopted by City Council. "This audience participation would give citizens an opportunity to voice their nninpns nn sits plans," Prochaska says. r Those who did speak at last night's public hearing on the subdivisión control ordinance urged that the commission not limit the ability of lififín " voice concerns over projíasfiddevelopments. They said they oppose any proposals to control subdivisión development "without the safeguards of a public hearing." In other business last night, the commission approved a series of staffinitiated zonings in the S. State St. area, placing Ml light industrial zoning on nine pareéis, R4D multiple family on five pareéis, R4C multiple family on one parcel, and AG agricultural zoning on another. The pareéis in question lie in the area generally between the 2500 block of S. State and the 1-94 freeway. Total area of the pareéis zoned Ml last night is 27.25 acres, ranging in size from .15 of an acre to 13.37 acres, while there were 14.56 acres zoned for multiple family use and 6.53 for agricultural. The commission also approved the "phase II" site plan for Village Green at Plymouth Rd. and Upland Dr., the second phase covering seven acres on which will be constructed 160 apartment units in buildings ranging from three to five stories. Near the close of last night's session, Commissioner Douglas D. Crary asked whether the Planning Commission should become involved in the decision-making process on whether a carport should be constructed on Washington between División and State. He said the Ann Arbor Transportation Authority had expressed concern over the proposed carport in light of its efforts to get more people into buses and out of automobiles.