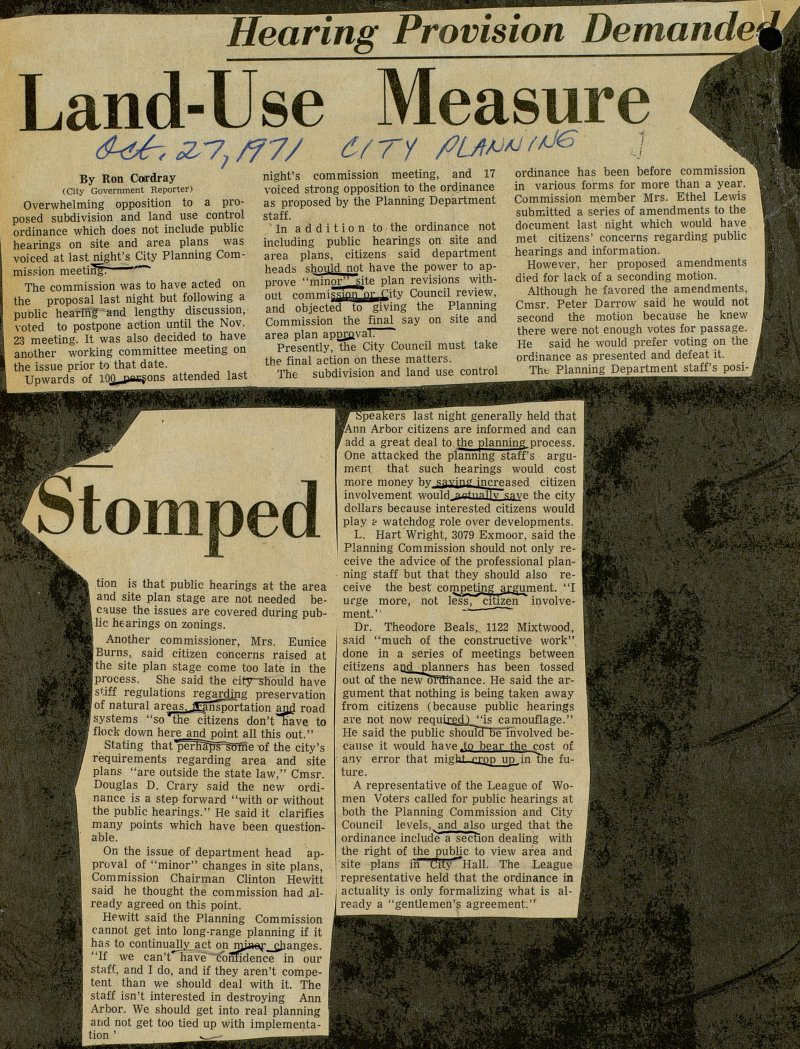 Overwhelming opposition to a proposed subdivisión and land use control ordinance which does not include public hearings on site and area plans was voiced at last night's City Planning Commission meeting. """ The commission was to have acted on the proposal last night but following a puDlic hearing and lengthy discussion, voted to postpone action until the Nov. 23 meeting. It was also decided to have another working committee meeting on the issue prior to that date. Upwards of lOfljjasgons attended last night's commission meeting, and 17 voiced strong opposition to the ordinance as proposed by the Planning Department staff. 1 In a d d i t i o n to the ordinance not including public hearings on site and area plans, citizens said department heads should not have the power to approve "minor" site plan revisions without commigaanjrity Council review, and objected to giving the Planning Commission the final say on site and area plan appjava! Presently, the City Council must take the final action on these matters. The subdivisión and land use control ordinance has been before commission in various forms for more than a year. Commission member Mrs. Ethel Lewis submitted a series of amendments to the document last night which would have met citizens' concerns regarding public hearings and information. However, her proposed amendments died for lack of a seconding motion. Although he favored the amendments, Cmsr. Peter Darrow said he would not second the motion because he knew there were not enough votes for passage. He said he would prefer voting on the ordinance as presented and defeat it. Tht Planning Department staff's posi-j tion is that public hearings at the area and site plan stage are not needed be1 cause the issues are covered during publ lic hearings on zonings. Another commissioner, Mrs. Eunice iBurns, said citizen concerns raised at Ithe site plan stage come too late in the Iprocess. She said the city-should have Istiff regulations regarding preservation of natural áreas, Jüañsporta tion and road ' systems "so the citizens don't have to flock down here_andpoint all this out." Stating thafpêTHfpFsöïne t)f the city's requirements regarding area and site plans "are outside the state law," Cmsr. Douglas D. Crary said the new ordinance is a step forward "with or without the public hearings." He said it clarifies many points which have been questionable. On the issue of department head approval of "minor" changes in site plans, Commission Chairman Clinton Hewitt said he thought the commission had already agreed on this point. Hewitt said the Planning Commission cannot get into long-range planning if it has to continually act on njir_cjianges. "If we can't havecbñtidence in our stafi, and I do, and if they aren't competent than we should deal with it. The staff isn't interested in destroying Ann Arbor. We should get into real planning and not get too tied up with implementation ' - - i i pêakërs last night generally held that WAnn Arbor citizens are informed and can F add a great deal to the planning.process. One attacked the planning staff's argument that such hearings would cost more money hv .■javjn.g jnrrpaspH citizen involvement wouldeiualliLSiave the city dollars because interested citizens would play b watchdog role over developments. L. Hart Wright, 3079 Exmoor, said the Planning Commission should not only receive the advice of the professional planning staff but that they should also receive the best comjpeting argument. "I urge more, not less, citizen involvement." Dr. Theodore Beals, 1122 Mixtwood, said "much of the constructive work" done in a series of meetings between citizens and jilanners has been tossed out of the neworafñance. He said the argument that nothing is being taken away f rom citizens (because public hearings are not now requinLdj"is camouflage." He said the public shoulcTbë hvolved because it would have.to bear the cost of any error that migfai-crgp uil in The future. A representative of the League of Women Voters called for public hearings at both the Planning Commission and City Council levéis,, and also urged that the ordinance include a secfïon dealing with the right of the public to view area and site plans in City"Hall. The League representative held that the ordinance in I actuality is only formalizing what is J ready a "gentlemen's agreement." I