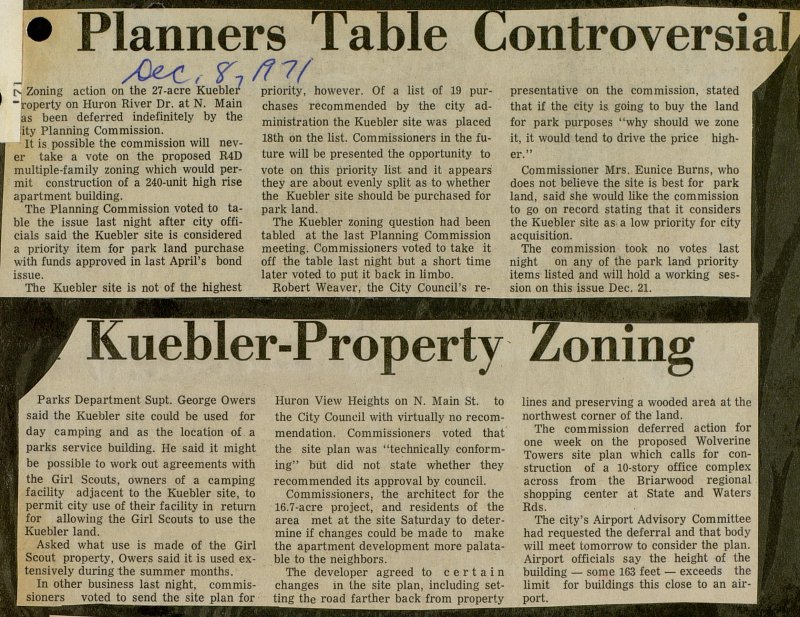 r Zoning action on the 27-acre Kuebler "roperty on Huron River Dr. at N. Main ás been deferred indefinitely by the iity Planning Commission. It is possible the commission will never take a vote on the proposed R4D multiple-family zoning which would permit construction of a 240-unit high rise apartment building. The Planning Commission voted to table the issue last night after city officials said the Kuebler site is considered a priority item for park land purchase with funds approved in last April's bond issue. The Kuebler site is not of the highest priority, however. Of a list of 19 purchases recommended by the city administration the Kuebler site was placed 18th on the list. Commissioners in the future will be presented the opportunity to vote on this priority list and it appears they are about evenly split as to whether the Kuebler site should be purchased for park land. The Kuebler zoning question had been tabled at the last Planning Commission meeting. Commissioners voted to take it off the table last night but a short time later voted to put it back in limbo. Robert Weaver, the City Council's presenta tive on the commission, stated that if the city is going to buy the land for park purposes "why should we zone it, it would tend to drive the price higher." Commissioner Mrs. Eunice Burns, who does not believe the site is best for park land, said she would like the commission to go on record stating that it considers the Kuebler site as a low priority for city acquisition. The commission took no votes last night on any of the park land priority items listed and will hold a working session on this issue Dec. 21. Parks Department Supt. George Owers said the Kuebler site could be used for day camping and as the location of a parks service building. He said it might be possible to work out agreements with the Girl Scouts, owners of a camping facility adjacent to the Kuebler site, to permit city use of their facility in return for allowing the Girl Scouts to use the Kuebler land. Asked what use is made of the Girl Scout property, Owers said it is used extensively during the summer months. In other business last night, commissioners voted to send the site plan for Hurón View Heights on N. Main St. to the City Couneil with virtually no recommendation. Commissioners voted that the site plan was "technically conforming" but did not state whether they recommended its approval by couneil. Commissioners, the architect for the 16.7-acre project, and residents of the area met at the site Saturday to determine if changes could be made to make the apartment development more palatable to the neighbors. The developer agreed to c e r t a i n changes in the site plan, including setting the road farther back from property lines and preserving a wooded area at the northwest corner of the land. The commission deferred action for one week on the proposed Wolverine Towers site plan which calis for construction of a 10-story office complex across from the Briarwood regional shopping center at State and Waters Rds. The city's Airport Advisory Committee had requested the deferral and that body will meet tomorrow to consider the plan. Airport officials say the height of the building - some 163 feet - exceeds the limit for buildings this close to an airport ___ _- ___