Planners Hold Up Projects Due To School, Sewer Questions 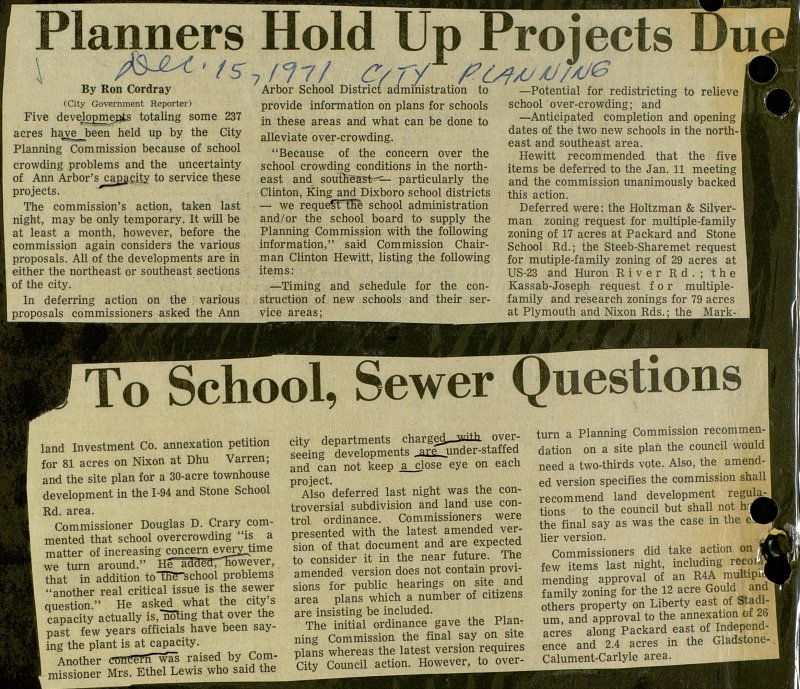 Five develojHnents totaling some 237 acres have been held up by the City Planning Commission because of school crowding problems and the uncertainty of Ann Arbor's capjjcjty to service these projects. The commission's action, taken last night, may be only temporary. It will be at least a month, however, before the commission again considers the various proposals. All of the developments are in either the northeast or southeast sections of the city. In deferring action on the various proposals commissioners asked the Ann Arbor School District administration to provide information on plans for schools in these áreas and what can be done to alleviate over-crowding. "Because of the concern over the school crowding conditions in the northeast and particularly the Clinton, King and Dixboro school districts - we requeSt tnè school administration andor the school board to supply the Planning Commission with the following information," said Commission Chairman Clinton Hewitt, listing the following items: -Timing and schedule for the construction of new schools and their service areas; 'JAS AS 't - Potential for redistricting to relieve school over-crowding; and - Anticipated completion and opening I dates of the two new schools in the north-J east and southeast area. Hewitt recommended that the five items be deferred to the Jan. 11 meeting and the commission unanimously backed this action. Deferred were: the Holtzman & Silverman zoning request for multiple-family zoning of 17 acres at Packard and Stone School Rd.; the Steeb-Sharemet request for mutiple-family zoning of 29 acres at US-23 and Huron River Ed.; the Kassab-Joseph request for multiplefamily and research zonings for 79 acres at Plymouth and Nixon Rds.; the land Investment Co. annexation petition for 81 acres on Nixon at Dhu Varren; and the site plan for a 30-acre townhouse development in the 1-94 and Stone School Rd. area. Commissioner Douglas D. Crary commented that school overcrowding "is a matter of increasing concern evetime we turn around." HéTSaettTliowever, that in addition toTfie-school problems "another real critical issue is the sewer question." He asked what the city's capacity actually is,"nöling that over the past few years officials have been saying the plant is at capacity. Another cönCeTnwa"s raised by ComI missioner Mrs. Ethel Lewis who said the city departments chargejsiüh. overseeing developments . ar.S „under-staffed and can not keep a close eye on each project. Also deferred last night was the controversial subdivisión and land use control ordinance. Commissioners were presented with the latest amended version of that document and are expected to consider it in the near future. The amended version does not contain provisions for public hearings on site and area plans which a number of citizens are insisting be included. The initial ordinance gave the Planning Commission the final say on site plans whereas the latest version requires City Council action. However, to turn a Planning Commission 1 dation on a site plan the council would I need a two-thirds vote. Also, the 1 ed version specifies the commission shall recommend land development regulaj tions to the council but shall not hrjM the final say as was the case in the eVj lier version. m Commissioners did take action on BH few items last night, including recoiAJ mending approval of an R4A multipi family zoning for the 12 acre Gould and others property on Liberty east of Stadium, and approval to the annexation oi acres along Packard east of Independence and 2.4 acres in the GladstoneCalument-Carlyle area.