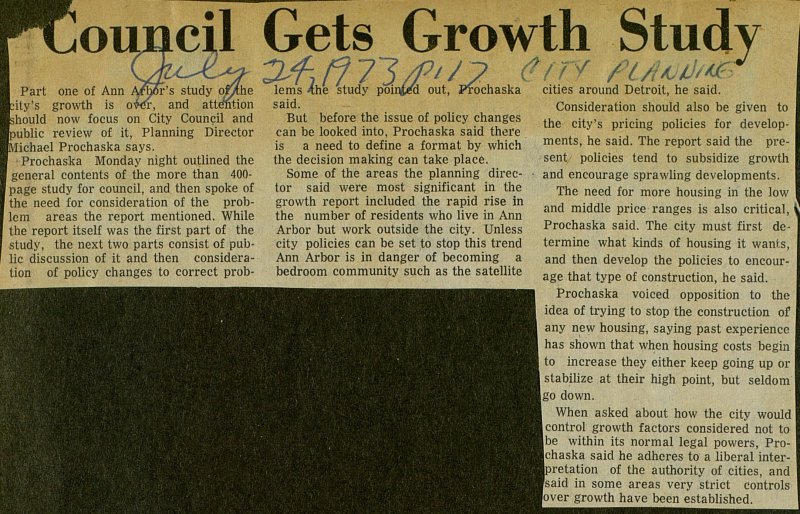 'y I - i Part one of Ann Afhor's study oftthe city's growth is owír, and attention Ehould now focus on City Council and taublic review of it, Planning Director (Michael Prochaska says. Prochaska Monday night outlined the general contents of the more than 400page study for council, and then spoke of the need for consideration of the problcm areas the report mentioned. While the report itself was the first part of the study, the next two parts consist of public discussion of it and then consideration of policy changes to correct lems Ahe study poinra out, Frochaska said. But before the issue of policy changes can be looked into, Prochaska said there is a need to define a format by which the decisión making can take place. Some of the areas the planning director said were most significant in the growth report included the rapid rise in the number of residents who live in Ann Arbor but work outside the city. Unless city policies can be set to stop this trend Ann Arbor is in danger of becoming a bedroom community such as the satellite cities around Detroit, he said. Consideration should also be given to the city's pricing policies for developments, he said. The report said the present policies tend to subsidize growth and encourage sprawling developments. The need for more housing in the low and middle price ranges is also critical, Prochaska said. The city must first determine what kinds of housing it wants, and then develop the policies to encourage that type of construction, he said. Prochaska voiced opposition to the idea of trying to stop the construction of any new housing, saying past experience has shown that when housing costs begin to increase they either keep going up or stabilize at their high point, but seldom igo down. When asked about how the city would Icontrol growth factors considered not to Ibe within its normal legal powers, ProIchaska said he adheres to a liberal interIpretation of the authority of cities, and Isaid in some areas very strict controls over growth have been established.