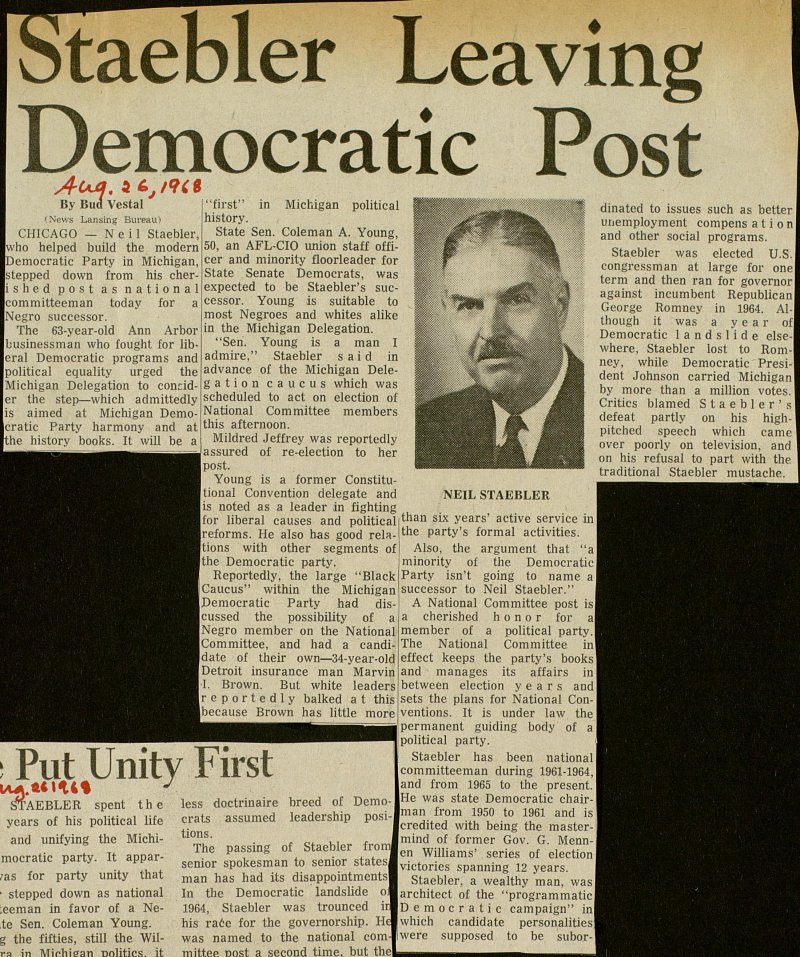 CHICAGO - N e i 1 Staebler, tvho helped build the modern Democratie Party in Michigan, itepped down from his chershed post as national :ommitteeman today for a Níegro successor. The 63-year-old Ann Arbor jusinessman who fought for lib;ral Democratie programs and solitical equality urged the Michigan Delegation to condd;r the step- which admittedly s aimed at Michigan Demo;ratic Party harmony and at ;he history books. It will be a "first" in Michigan political history. State Sen. Coleman A. Young, 50, an AFL-CIO union staff officer and minority floorleader for State Senate Democrats, was expected to be Staebler's successor. Young is suitable to most Negroes and whites alike in the Michigan Delegation. "Sen. Young is a man I admire," Staebler said in advance of the Michigan Delegation caucus which was scheduled to act on election of National Committee members this afternoon. Mildred Jeffrey was reportedly assured of re-election to her post. Young is a former Constitutional Convention delégate and is noted as a leader in fighting for liberal causes and political reforms. He also has good relations with other segments of the Democratie party. Reportedly, the large "Black Caucus" within the Michigan Democratie Party had disiussed the possibility of a Negro member on the National Oommittee, and had a candiiate of their own - 34-year-old Detroit insurance man Marvin I. Brown. But white leaders reportedly balked a t this because Brown has little more -■ : , ithan six years' active service in the party's formal activities. Also, the argument that "a minority of the Democratie Party isn't going to name a successor to Neil Staebler." A National Committee post is a cherished honor for al member of a political party. The National Committee inl effect keeps the party's books and manages its affairs in between election years and sets the plans for National Conventions. It is under law the permanent guiding body of a political party. i Staebler has been national [committeeman during 1961-1964, land from 1965 to the present. Ifíe was state Democratie chairIman from 1950 to 1961 and is Icredited with being the masterImind of former Gov. G. Mennlen Williams' series of election I victories spanning 12 years. Staebler, a wealthy man, was [architect of the "programmatic Democratie campaign" in Iwhich candidate personalities llwere supposed to be subor- dinated to issues such as better unemployment compens a t i o n and other social programs. Staebler was elected U.S. congressman at large for one term and then ran for governor against incumbent Republican George Romney in 1964. Although it was a y e a r of Democratie 1 a n d s 1 i d e elsewhere, Staebler lost to Romney, while Democratie President Johnson carried Michigan by more than a million votes. Critics blamed Staebler's defeat partly on his highpitched speech which came over poorly on televisión, and on his refusal to part with the traditional Staebler mustache.