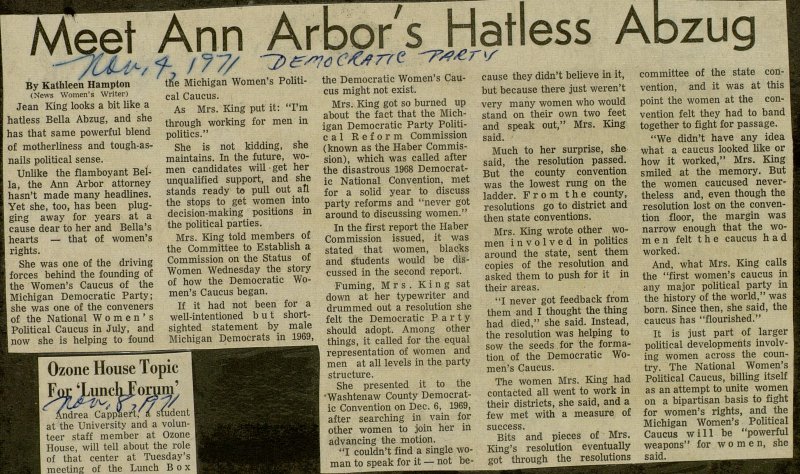 Jean King looks a bit like a haüess Bella Abzug, and she has that same powerful blend of motherliness and tough-asnails political sense. Unlike the flamboyant Beila, the Ann Arbor attorney hasn't made many headlines. Yet she, too, has been plugging away for years at a cause dear to her and Bella's hearts - that of women's rights. She was one of the driving forces behind the founding of the Women's Caucus of the Michigan Democratie Party; I she was one of the conveners of the National Women's Political Caucus in July, and now she is helping to found the Michigan Women's Political Caucus. As Mrs. King put it: "I'm through working for men in politics." She is not Mdding, she maintains. In the future, women candidates will ■ get her unqualified support, and she stands ready te pull out all the stops to get women into decision-making positions in the political parties. Mrs. King told members oL the Committee to Establish a Commission on the Status of Women Wednesday the story of how the Democratie Women's Caucus began. If it had not been for a well-intentioned b u t shortsighted statement by male Michigan Democrats in 1969, the Democratie Women's Caucus might not exist. Mrs. King got so burned up about the fact that the Michigan Democratie Party Political Reform Commission (known as the Haber Commission), which was called af ter the disastrous 1968 Democratie National Convention, met for a solid year to discuss party reforms and "never got around to discussing women." In the first report the Haber Commission issued, it was stated that women, blacks and students would be discussed in the second report. Fuming, Mrs. King sat down at her typewriter and drummed out a resolution she feit the Democratie Party should adopt. Among other things, it called for the equal representation of women and men at all levéis in the party structure. She presented it to the Washtenaw County Democratie Convention on Dec. 6, 1969, after searching in vain for other women to join her in advancing the motion. "I couldn't find a single woman to speak for it - not cause they didn't believe in it, but because there just weren't very many women who would stand on their own two feet and speak out," Mrs. King said. Much to her surprise, she said, the resolution passed. But the county convention was the lowest rung on the ladder. F r o m the county, resolutions go to district and then state conventions. Mrs. King wrote other women involved in politics around the state, sent them copies of the resolution and asked them to push for it in their areas. "I never got feedback from them and I thought the thing had died," she said. Instead, the resolution was helping to sow the seeds for the formation of the Democratie Women's Caucus. The women Mrs. King had contacted all went to work in their districts, she said, and a few met with a measure of success. Bits and pieces of Mrs. King's resolution eventually got through the resolutions committee of the state I vention, and it was at this I point the women at the I vention feit they had to band I together to fight for passage. "We didn't have any idea I what a caucus looked like or how it worked," Mrs. King smiled at the memory. But the women caucused nevertheless and, even though the resolution lost on the convention floor, the margin was narrow enough that the women feit the caucus had worked. And, what Mrs. King calis the "first women's caucus in any major political party in the history of the world," was born. Since then, she said, the caucus has "flourished." It is just part of larger political developments involving women across the country. The National Women's Political Caucus, billing itself as an attempt to unite women on a bipartisan basis to fight for women's rights, and the Michigan Women's Political Caucus will be "powerful weapons" for women, she said. '