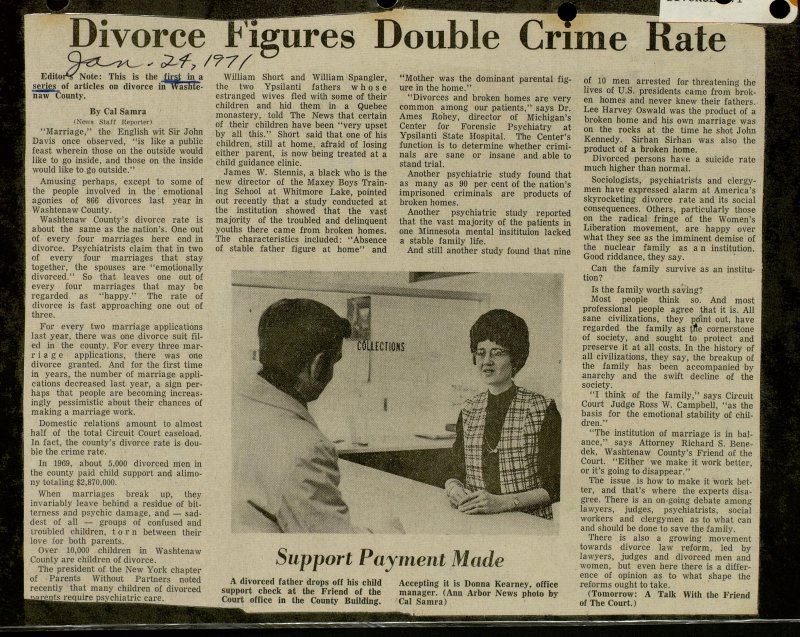 Efë EditoiV Note: This is the m-sfl; in a ■ series of articles on divorce in WashteH naw County. KBy Cal Samra p.. (News Start Reporter) êsmt "Marriage," the English wit Sir John Eji'l Davis once observed, "is like a public BC I feast wherein those on the outside would ■LI like to go inside, and those on the inside f3?' would like to go outside." W: Amusing perhaps, except to some of I the people involved in the emotional aL I agonies of 866 divorces last year in j$; I Washtenaw County. j"L Washtenaw County's divorce rate is !&■' rij about the same as the nation's. One out fc"'-l of every four marriages here end in Kfc.J divorce. Psychiatrists claim that in two I of every four marriages that stay L.'1 together, the spouses are "emotionally pv'.l divorced." So that leaves one out of ií& I every four marriages that may be ?A regarded as "happy." The rate of i' I divorce is f ast approaching one out of ;'Y. I three. For every two marriage applications !;! last year, there was one divorce suit filv I ed in the county. For every three marpf I r i a g e applications, there was one W I divorce granted. And for the first time É I in years, the number of marriage appliÍS.I cations decreased last year, a sign perijSá haps that people are becoming increasisA ingly pessimistic about their chances of K making a marriage work. Domestic relations amount to almost feK-1 half of the total Circuit Court caseload. P, In fact, the county's divorce rate is douH ble the crime rate. 3%fc In 1969 about 5,000 divorced men in Ëj the county paid child support and alimoL j ny totaling $2,870,000. K When marriages break up, they HH invariably leave behind a residue of bitI terness and psychic damage, and - sad dest of all - groups of confused and 3 iroubled children, torn between their Ejs3 love for both parents. FJ Over 10,000 children in Washtenaw =M County are children of divorce. %gg The president of the New York chapter JÜH of Parents Without Partners noted Illl recently that many children of divorced SvLjajritsrequire psvchiatric care. ' 'f. William Short and William Spangier, the two Ypsilanti fathers whose estranged wives fled with some of their children and hid them in a Quebec monastery, told The News that certain of their children have been "very upset by all this." Short said that one of his children, still at home, afraid of losing either parent, is now being treated at a child guidance clinie. James W. Stennis, a black who is the new director of the Maxey Boys Training School at Whitmore Lake, pointed out recently that a study conducted at the institution showed that the vast majority of the troubled and delinquent youths there carne from broken homes. The characteristics included: "Absence of stable father figure at home" and "Mother was the dominant parental figure in the home." "Divorces and broken homes are very common among our patients," says Dr. Ames Robey, director of Michigan's Center for Forensic Psychiatry at Ypsilanti State Hospital. The Center's function is to determine whether crimináis are sane or insane and able to stand trial. Another psychiatrie study found that as many as 90 per cent of the nation's imprisoned crimináis are producís of broken homes. Another psychiatrie study reported that the vast majority of the patients in one Minnesota mental insitituion lacked a stable family life. And still another study found that nine of 10 men arrested for threatening the pt 't: lives of U.S. presidents carne from brok■jY en homes and never knew their fathers. ISvfö Lee Harvey Oswald was the product of a -,3 broken home and his own marriage was 'j&&É& on the rocks at the time he shot John "vg Kennedy. Sirhan Sirhan was also the -jiL product of a broken home. '-iHSB" Divorced persons have a suicide rate RiSE much higher than normal. jE2v Sociologists, psychiatrists and clergyI $% men have expressed alarm at America's r;''' skyrocketing divorce rate and its social l--._'j, ' j consequences. Others, particularly those I -- -J on the radical fringe of the Women's ly Kr] Liberation movement, are happy over líTal what they see as the imminent demise of l1' the nuclear family as a n institution. I -■ ' Good riddance, they say. "! 1 ' Can the family survive as an i "'," ■"' tion? ■ ;JL Is the family worth saving? "'S Most people think so. And most I" 7 professional people agree that it is. All "''t sane civilizations, they polnt out, have I " % i regarded the family as Úe cornerstone L -S' of society, and sought to protect and ktÉfy,-', preserve it at all costs. In the history of lBLji all civilizations, they say, the breakup of FTgfrthe family has been accompanied by I anarchy and the swift decline of the lg society. ÍOK "I think of the family," says Circuit I Bb Court Judge Ross W. Campbell, "as the ;-"K basis for the emotional stability of l-VSsïP dren." '" "The institution of marriage is in 'i' anee," says Attorney Richard S. I gSdek, Washtenaw County's Friend of the I Í ijSWti Court. "Either we make it work better, rHi& í or it's going to disappear." WÊffi The issue is how to make it work j - l;í ter, and that's where the experts llÉliw gree. There is an on-going debate among $&& W lawyers, judges, psychiatrists, social fPsKa workers and clergymen as to what can íSfeÁ;J and should be done to save the family. 5ÉlPv4 There is also a growing movement lpifs towards divorce law reform, led by '3sëS?J lawyers, judges and divorced men and LtpJ?g women, but even here there is a lfffÍ ence of opinión as to what shape the :'fBÍjigf reforms ought to take. -iË (Tomorrow: A Talk With the Friend LífÍlÍ of The Court.) 'ÈaSsi