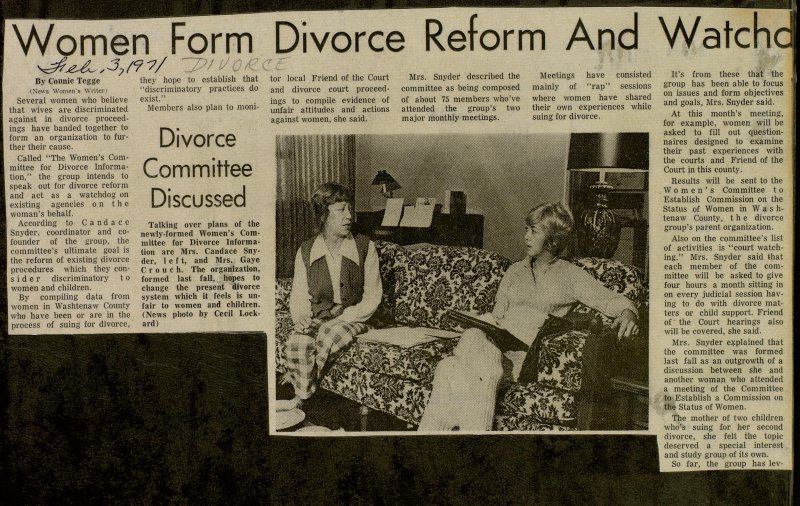 Several women who believe that wives are discriminated against in divorce proceedings have banded together to form an organization to further their cause. Called "The Women's Committee for Divorce Information," the group intends to speak out for divorce reform i and act as a watchdog on existing agencies on the woman's behalf. According to Candacc I Snyder, coördinator and coI founder of the group, the I committee's ultimate goal is I the reform of existing divorce I procedures which they conI s i d e r discriminatory t o I women and children. By compiling data from I women in Washtenaw County Iwho have been or are in the I process of suing for divorce, they hope to establish that "discriminatory practices do exist." Members also plan to tor local Friend of the Court and divorce court proceedings to compile evidence of unfair attitudes and actions against women, she said. Mrs. Snydei' described the committee as being composed of about 75 members who've attended the group's two major monthly meetings. Meetings have consisted mainly of "rap" sessions where women have shared their own experiences while suing for divorce. It's from these that the group has been able to focus ! on issues and form objectives and goals, Mrs. Snyder said. At this month's meeting, j for example, women will be j asked to fill out naires designed to examine their past experiences with the courts and Friend of the Court in this county. Results will be sent to the W o m e n ' s Committee t o Establish Commission on the Status of Women in W a s tenaw County, the divorce group's parent organization. Also on the committee 's list of activities is "court watching." Mrs. Snyder said that j each member of the J mittee will be asked to give four hours a month sitting in on every judicial session j ing to do with divorce matters or child support. Friend of the Court hearings also will be covered, she said. Mrs. Snyder explained that the committee was formed last fall as an outgrowth of a discussion between she and another woman who attended J a meeting of the Committee to Establish a Commission on the Status of Women. The mother of two children who's suing for her second i divorce, she feit the topic I deserved a special interest I and study group of its own. So far, the group has