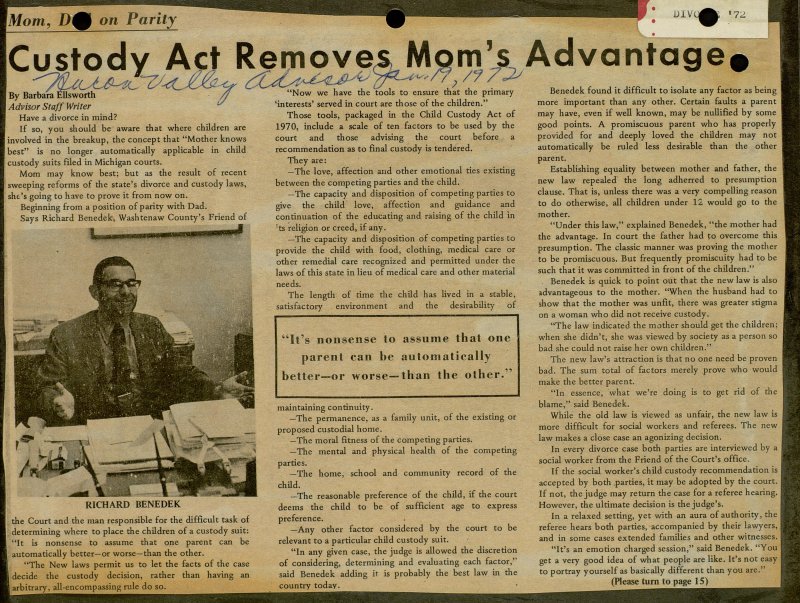 Have a divorce in mind? If so, you should be aware that where children are involved in the breakup, the concept that "Mother knows best" is no longer automatically applicable in child custody suits fUed in Michigan courts. Mom may know best; but as the result of recent sweeping reforms of the state's divorce and custody laws, sht's going to have to prove it from now on. Beginning from a position of parity with Dad. Says Richard Benedek, Washtenaw County's Friend of the Court and the man responsible for the difficult task of determining where to place the children of a custody suit: I "It is nonsense to assume that one parent can be I automatically better- or worse- than the other. "The New laws permit us to let the facts of the case I decide the custody decisión, rather than having an I arbitrary, all-encompassing rule do so. 1_ ■ "Now we have the tools to ensure that the pnmary 'interests' served in court are those of the children." Those tools, packaged in the Child Custody Act of 1970, include a scale of ten factors to be used by the court and those advising the court before a recommendation as to final custody is tendered. They are: -The love, affection and other emotional ties existing between the competing parties and the child. -The capacity and disposition of competing parties to give the child love, affection and guidance and continuation of the educating and raising of the child in :ts religión or creed, if any. -The capacity and disposition of competing parties to provide the child with food, clothing, medical care or other remedial care recognized and permitted under the laws of this state in lieu of medical care and other material needs. The length of time the child has lived in a stable, satisfactory environment and the desirability of maintaining continuity. -The permanence, as a family unit, of the existing or proposed custodial home. -The moral fitness of the competing parties. -The mental and physical health of the competing parties. -The home, school and community record of the chÜd. -The reasonable preference of the child, if the court deerns the child to be of sufficient age to express preference. - Any other factor considered by the court to be relevant to a particular child custody suit. "In any given case, the judge is allowed the discretion of considering, determining and evaluating each factor,1' said Benedek adding it is probably the best law in the country today. Benedek found it difficult to isolate any factor as being I more important than any other. Certain faults a parent I may have, even if well known, may be nullified by some I good points. A promiscuous parent who has properly I provided for and deeply loved the children may not I automatically be ruled less desirable than the other I parent. Establishing equality between mother and father, the I new law repealed' the long adherred to presumption I clause. That is, unless there was a very compelling reason I to do otherwise, all children under 12 would go to the I mother. "Under this law," explained Benedek, "the mother had the advantage. In court the father had to overeóme this presumption. The classic manner was proving the mother to be promiscuous. But frequently promiscuity had to be such that it was committed in front of the children." Benedek is quick to point out that the new law is also l; advantageous to the mother. "When the husband had to jshow that the mother was unfit, there was greater stigma I. on a woman who did not receive custody. "The law indicated the mother should get the children; I when she didn't, she was viewed by society as a person so I bad she could not raise her own children." The new law's attraction is that no one need be proven I bad. The sum total of factors merely prove who would I make the better parent. "In essence, what we're doing is to get rid of the I blame," said Benedek. While the old law is viewed as unfair, the new law is I more difficult for social workers and referees. The new I law makes a close case an agonizing decisión. In every divorce case both parties are interviewed by a I social worker from the Friend of the Court's office. If the social worker's child custody recommendation is I accepted by both .parties, it may be adopted by the court. I If not, the judge may return the case for a referee hearing. I However, the ultímate decisión is the judge's. In a relaxed setting, yet with an aura of authority, the I referee hears both parties, accompanied by their lawyers, I and in some cases extended families and other witnesses. I "It's an emotion charged session," said Benedek. "You I get a very good idea of what people are like. It's not easy I to portray yourself as basically different than you are." (Please turn to page 15) B "It's nonsense to assume that one parent can be automatically better- or worse- than the other."