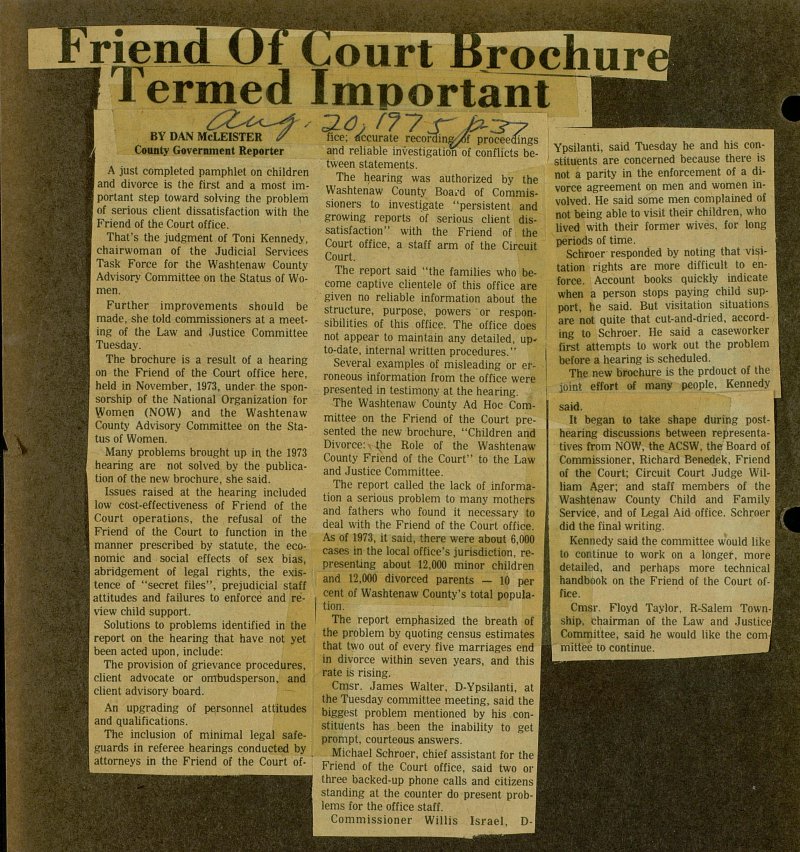 A just completed pamphlet on children ■ and divorce is the first and a most im■ portant step toward solving the problem ■ of serious cliënt dissatisfaction with the ■ Friend of the Court office. That's the judgment of Toni Kennedy, I chairwoman of the Judicial Services I Task Force for the Washtenaw County I Advisory Committee on the Status of WoI men. Further improvements should be I made, she told commissioners at a meetI ing of the Law and Justice Committee I Tuesday. The brochure is a result of a hearing I on the Friend of the Court office here, I held in November, 1973, under the sponI sorship of the National Organization for I Women (NOW) and the Washtenaw I County Advisory Committee on the StaI tus of Women. Many problems brought up in the 1973 I hearing are not solved by the publicaI tion of the new brochure, she said. ■ Issues raised at the hearing included I low cost-effectiveness of Friend of the I Court operations, the refusal of the I Friend of the Court to function in the I manner prescribed by statute, the ecoI nomic and social effects of sex bias, I abridgement of legal rights, the exisI tence of "secret files", prejudicial staff I attitudes and failures to enforce and réI view child support. Solutions to problems identified in the I report on the hearing that have not yet I been acted upon, include: The provisión of grievance procedures, I cliënt advocate or ombudsperson, and I cliënt advisory board. An upgrading of personnel attitudes I and qualifications. The inclusión of minimal legal safeI guards in referee hearings conducted by I attorneys in the Friend of the Court nee; accurate recordingf proceedings and reliable investigation of conflicts j tween statements. The hearing was authorized by the Washtenaw County Board of Commissioners to investígate "persistent and growing reports of serious cliënt dissatisfaction" with the Friend of the Court office, a staff arm of the Circuit Court. The report said "the families who become captive clientèle of this office are given no reliable information about the structure, purpose, powers or responsibilities of this office. The office does not appear to maintain any detailed, upto-date, internal written procedures." Several examples of misleading or erroneous information from the office were presented in testimony at the hearing. The Washtenaw County Ad Hoc Committee on the Friend of the Court presented the new brochure, "Children and Divorce: .{he Role of the Washtenaw County Friend of the Court" to the Law and Justice Committee. The report called the lack of information a serious problem to many mothers and fathers who found it necessary to deal with the Friend of the Court office. As of 1973, it said, there were about 6,000 cases in the local office's jurisdiction, representing about 12,000 minor children and 12,000 divorced parents - 10 per cent of Washtenaw County's total population. The report emphasized the breath of I the problem by quoting census estimates I that two out of every five marriages end I in divorce within seven years, and this I rate is rising. Cmsr. James Walter, D-Ypsilanti, at I the Tuesday committee meeting, said the I biggest problem mentioned by his I stituents has been the inability to get I prompt, courteous answers. Michael Schroer, chief assistant for the I Friend of the Court office, said two orl ! three backed-up phone calis and citizens I standing at the counter do present 1 j lems for the office staff. Commissioner Willis Israel, D-I HHHHSimiiltfHH Ypsilanti, said Tuesday he and his constituents are concerned because there is I not a panty in the enforcement of a I vorce agreement on men and women involved. He said some men complained of I not being able to visit their children, who I lived with their former wives, for long I periods of time. 1 Schroer responded by noting that I tation rights are more difficult to I force. Account books quickly indicate I when a person stops paying child I port, he said. But visitation situations I are not quite that cut-and-dried, I ing to Schroer. He said a caseworker I first attempts to work out the problem I before a hearing is scheduled. The new brochure is the prdouct of the joint effort of many people, Kennedy said. It began to take shape during 1 hearing discussions between 1 tives from NOW, the ACSW, the Board of I Commissioner, Richard Benedek, Friend I of the Court; Circuit Court Judge I iiam Ager; and staff members of the I Washtenaw County Child and Family I Service, and of Legal Aid office. Schroer I did the final writing. Kennedy said the committee would like I to continue to work on a longer, more I detailed, and perhaps more technical I handbook on the Friend of the Court 1 fice. Cmsr. Floyd Taylor, R-Salem Town-1 I ship, chairman of the Law and Justicel I Committee, said he would like the com M I mittëë to continue. H