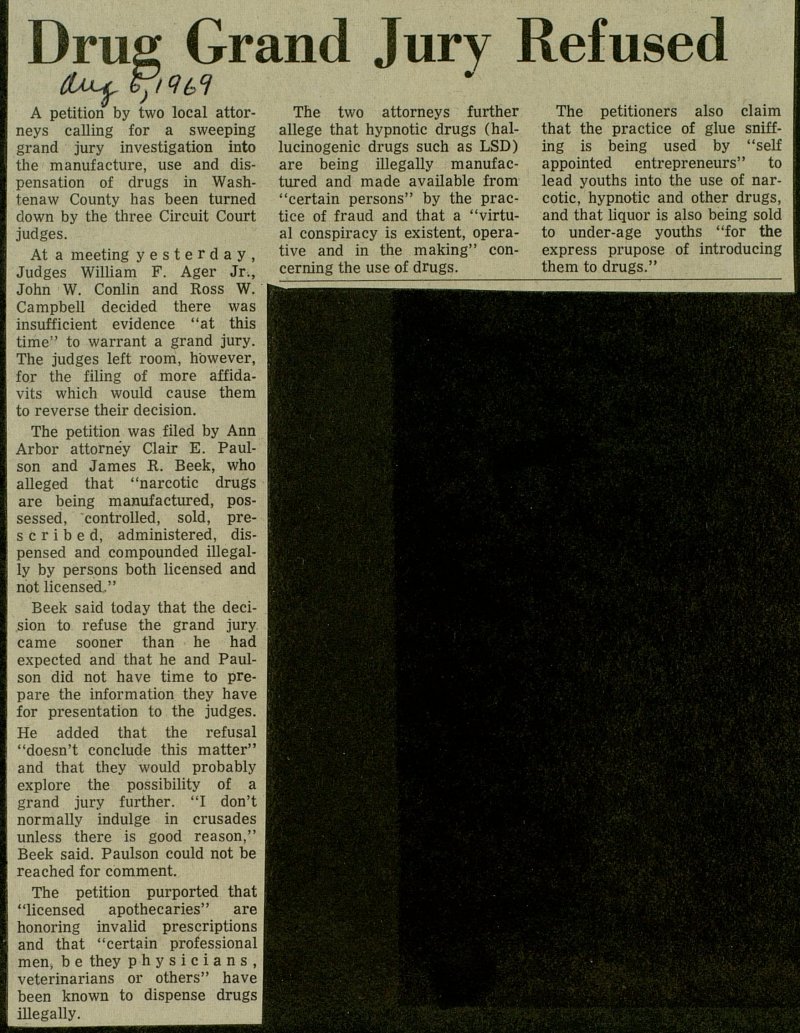 A petition by two local attorneys calling for a sweeping grand jury investigation into the manufacture, use and dispensation of drugs in Washtenaw County has been turned down by the three Circuit Court judges. At a meeting yesterday, Judges William F. Ager Jr., John W. Conlin and Ross W. Campbell decided there was insufficient evidence "at this time" to warrant a grand jury. The judges left room, hbwever, for the filing of more affidavits which would cause them to reverse their decisión. The petition was filed by Ann Arbor attornéy Clair E. Paulson and James R. Beek, who alleged that "narcotic drugs are being manufactured, possessed, controlled, sold, pres c r i b e d, administered, dispensed and compounded illegally by persons both licensed and not licensed." Beek said today that the decisión to refuse the grand jury carne sooner than he had expected and that he and Paulson did not have time to prepare the information they have for presentation to the judges. He added that the refusal "doesn't conclude this matter" and that they would probably explore the possibility of a grand jury further. "I don't normally indulge in crusades unless there is good reason," Beek said. Paulson could not be reached for comment. The petition purported that "licensed apothecaries" are honoring invalid prescriptions and that "certain professional men, b e they physicians, veterinarians or others" have been known to dispense drugs illegally. The two attorneys further allege that hypnotic drugs (hallucinogenic drugs such as LSD) are being illegally manufactured and made available from "certain persons" by the practice of fraud and that a "virtual conspiracy is existent, operative and in the making" concerning the use of drugs. The petitioners also claim that the practice of glue sniffing is being used by "self appointed entrepreneurs" to lead youths into the use of narcotic, hypnotic and other drugs, and that liquor is also being sold to under-age youths "for the express prupose of introducing them to drugs."