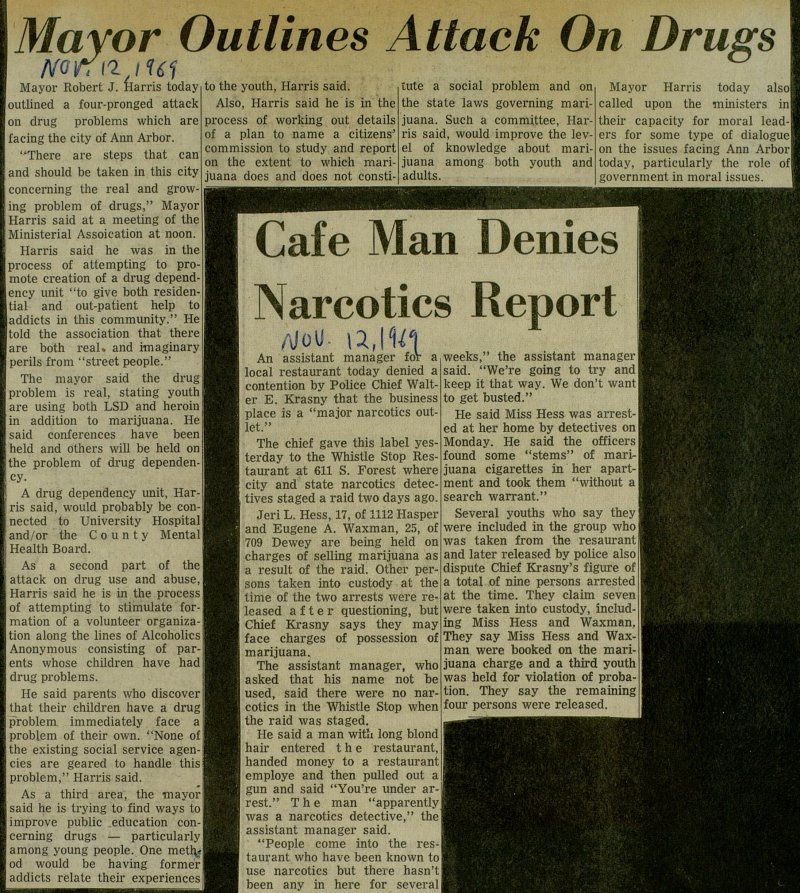 Mayor Robert J. Harris today outlined a four-pronged attack on drug problems which are facing the city of Ann Arbor. "There are steps that can and should be taken in this city concerning the real and growing problem of drugs," Mayor Harris said at a meeting of the Ministerial Association at noon. Harris said he was in the process of attempting to promote creation of a drug dependency unit "to give both residential and out-patient help to addicts in this community." He told the association that there are both real, and imaginary perils from "street people." The mayor said the drug problem is real, stating youth are using both LSD and heroin in addition to marijuana. He said conferences have been held and others will be held on the problem of drug dependency. A drug dependency unit, Harris said, would probably be connected to University Hospital and/or the County Mental Health Board. As a second part of the attack on drug use and abuse, Harris said he is in the process of attempting to stimulate formation of a volunteer organization along the lines of Alcoholics Anonymous consisting of parents whose children have had drug problems. He said parents who discover that their children have a drug problem immediately face a problem of their own. "None of the existing social service agencies are geared to handle this problem," Harris said. As a third area, the mayor said he is trying to find ways to improve public education concerning drugs - particularly among young people. One method would be having former addicts relate their experiences to the youth, Harris said. Also, Harris said he is in the process of working out details , of a plan to name a citizens' commission to study and report on the extent to which marijuana does and does not constitute a social problem and on the state laws governing marijuana. Such a committee, Harris said, would improve the level of knowledge about marijuana among both youth and adults. Mayor Harris today also called upon the ministers in their capacity for moral leaders for some type of dialogue on the issues facing Ann Arbor today, particularly the role of government in moral issues.