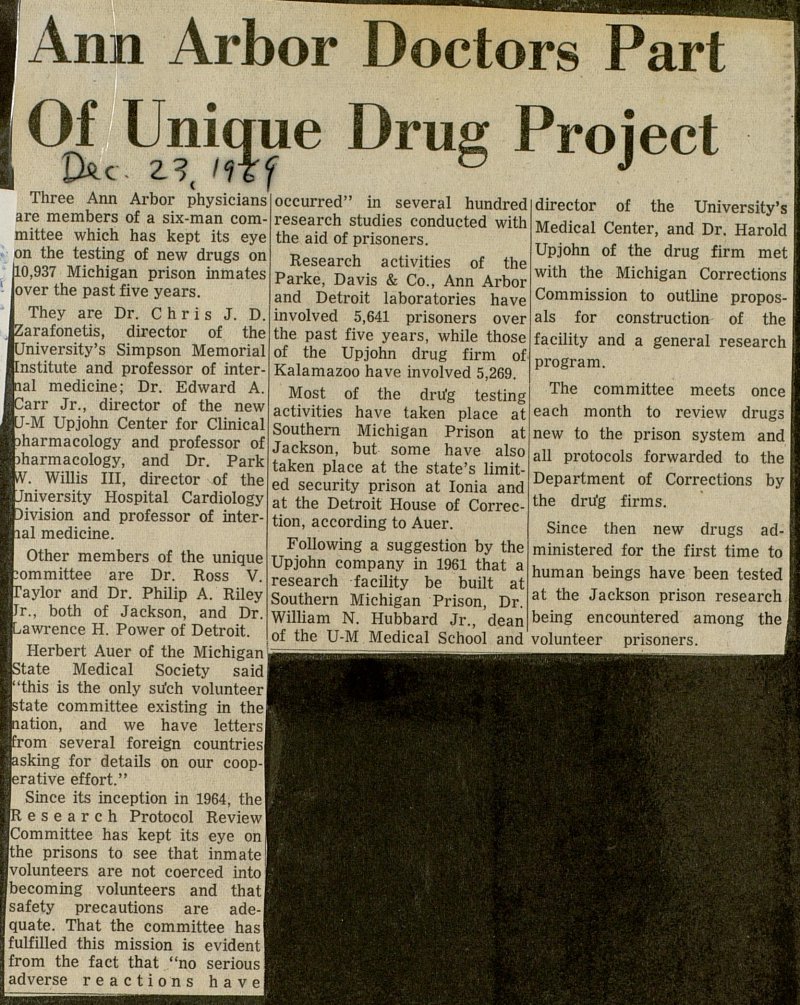 Three Ann Arbor physicians are members of a six-man committee which has kept its eye on the testing of new drugs on 10,937 Michigan prison inmates over the past five years. They are Dr. Chris J. D. Zarafonetis, director of the University's Simpson Memorial [nstitute and professor of intertial medicine; Dr. Edward A. Carr Jr., director of the new J-M Upjohn Center for Clinical bharmacology and professor of fcharmacology, and Dr. Park M. Willis III, director of the tjniversity Hospital Cardiology División and professor of interhal medicine. I Other members of the unique pommittee are Dr. Ross V. Taylor and Dr. Philip A. Riley ur., both of Jackson, and Dr. Lawrence H. Power of Detroit. Herbert Auer of the Michigan1 Btate Medical Society said "this is the only su'ch volunteer state committee existing in the nation, and we have letters trom several foreign countriesl psking for details on our coop-l erative effort." [ Since its inception in 1964, the Research Protocol Review Committee has kept its eye on the prisons to see that inmate volunteers are not coerced into becoming volunteers and that safety precautions are ade-l quate. That the committee hasl Eulfilled this mission is evident] from the fa et that "no serious adverse reactions havel r occurred" in several hundred research studies conducted with the aid of prisoners. Research activities of the Parke, Da vis & Co., Ann Arbor and Detroit laboratories have involved 5,641 prisoners over the past five years, white those of the Upjohn drug firm of Kalamazoo have involved 5,269. Most of the dru'g testing activities have taken place at Southern Michigan Prison at Jackson, but some have also taken place at the state's limited security prison at Ionia and at the Detroit House of Correction, according to Auer. Following a suggestion by the Upjohn company in 1961 that a research facility be built at Southern Michigan Prison, Dr. William N. Hubbard Jr., dean of the U-M Medical School and director of the University's Medical Center, and Dr. Harold Upjohn of the drug firm met with the Michigan Corrections Commission to outline proposals for construction of the facility and a general research program. The committee meets once each month to review drugs new to the prison system and all protocols forwarded to the Department of Corrections by the drifg firms. Since then new drugs administered for the first time to human beings have been tested at the Jackson prison research being encountered among thej volunteer prisoners.