Students Learn About Drugs, Their Effects In Classroom 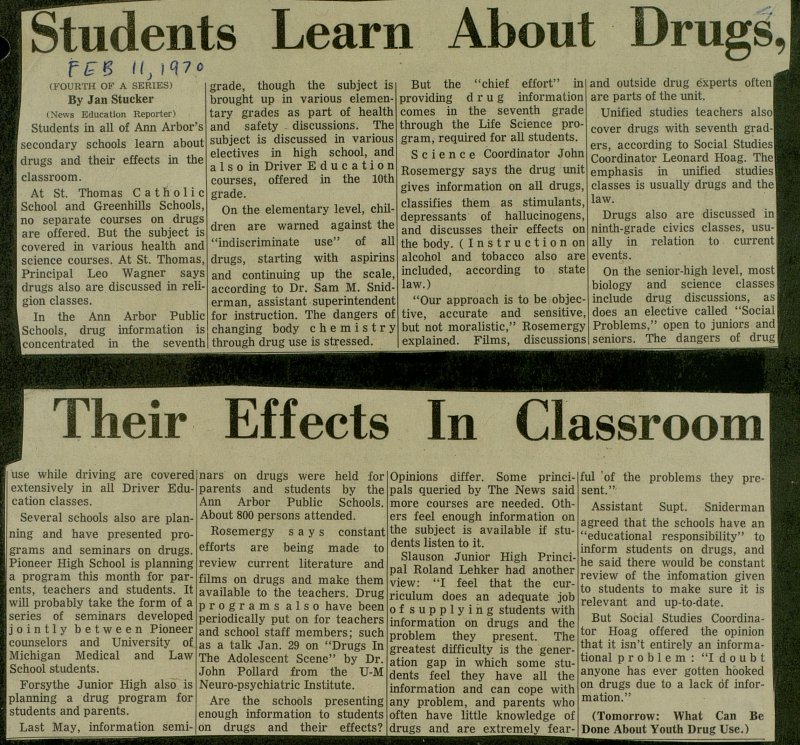 (FOURTH OF A SERIES) Students in all of Ann Arbor's secondary schools learn about drugs and their effects in the classroom. At St. Thomas Catholic School and Greenhills Schools, no separate courses on drugs are offered. But the subject is covered in various health and science courses. At St. Thomas, Principal Leo Wagner says drugs also are discussed in religión classes. In the Ann Arbor Public Schools, drug information is .eoncentrated in the seventh grade, though the subject is brought up in various elementary grades as part of health and safety . discussions. The subject is discussed in various electives in high school, and a 1 s o in Driver Education courses, offered in the lOth grade. On the elementary level, children are warned against the "indiscriminate use" of all drugs, starting with aspirins and continuing up the scale, according to Dr. Sam M. Sniderman, assistant superintendent for instruction. The dangers of changing body chemistry through drug use is stressed. But the "chief effort" in providing drug information comes in the seventh grade through the Life Science program, required for all students. Science Coördinator John Rosemergy says the drug unit gives information on all drugs, classifies them as stimulants, depressants of hallucinogens, and discusses their effects on the body. (Instructionon alcohol and tobáceo also are included, according to state law.) "Our approach is to be objective, accurate and sensitive, but not moralistic," Rosemergy explained. Films, discussions and outside drug experts oftenj are parts of the unit. Unified studies teachers alsol cover drugs with seventh grad-l ers, according to Social Studies! Coördinator Leonard Hoag. Thel emphasis in unified studies classes is usually drugs and the law. Drugs also are discussed in ninth-grade civics classes, usually in relation to current events. On the senior-high level, mostj biology and science classes include drug discussions, as does an elective called "Social Problems," open to juniors and seniors. The dangers of drug use while driving are covered extensively in all Driver Education classes. Several schools also are planning and have presented programs and seminars on drugs. Pioneer High School is planning a program this month for parents, teachers and students. It will probably take the form of a series of seminars developed jointly between Pioneer counselors and University of Michigan Medical and Law School students. Forsythe Junior High also is planning a drug program for students and parents. Last May, information nars on drugs were held for parents and students by the Ann Arbor Public Schools. About 800 persons attended. Hosemergy s a y s constant efforts are being made to review current literature and films on drugs and make them available to the teachers. Drug programs also have been periodically put on for teachers and school staff members; such as a talk Jan. 29 on "Drugs In The Adolescent Scène" by Dr. John Pollard from the U-M Neuro-psychiatric Institute. Are the schools presenting enough information to students on drugs and their effects? Opinions differ. Some principáis queried by The News said more courses are needed. Others feel enough information on the subject is available if students listen to it. Slauson Junior High Principal Roland Lehker had another view: "I feel that the curriculum does an adequate job of supplying students with information on drugs and the problem they present. The greatest difficulty is the generation gap in which some students feel they have all the information and can cope with any problem, and parents who often have little knowledge of drugs and are extremely ful 'of the problems they present." Assistant Supt. Sniderman agreed that the schools have an "educational responsibility" to inform students on drugs, and he said there would be constant review of the infomation given to students to make sure it is relevant and up-to-date. But Social Studies Coördinator Hoag offered the opinión that it isn't entirely an informational problem: "I doubt anyone has ever gotten hooked on drugs due to a lack öf information." (Tomorrow: What Can Be Done About Youth Drug Use.)