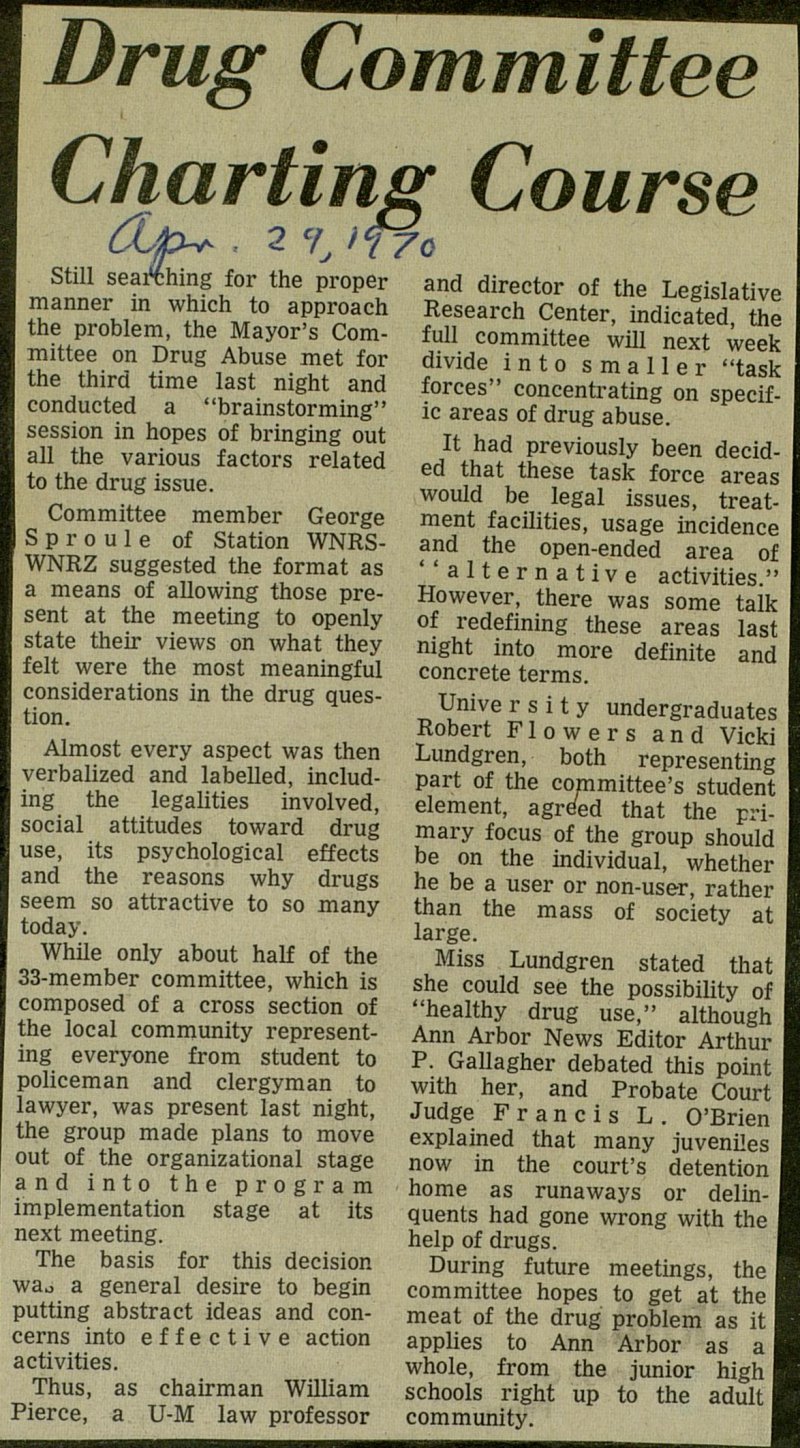 Still searching for the proper manner in which to approach the problem, the Mayor's Committee on Drug Abuse met for the third time last night and conducted a "brainstorming" session in hopes of bringing out all the various factors related to the drug issue. Committee member George I S p r o u 1 e of Station WNRSWNRZ suggested the format as a means of allowing those present at the meeting to openly state their views on what they feit were the most meaningful considerations in the drug question. Almost every aspect was then verbalized and labelled, including the legalities involved, social attitudes toward drug use, its psychological effects and the reasons why drugs seem so attractive to so many today. While only about half of the 33-member committee, which is composed of a cross section of the local community representing everyone from student to policeman and clergyman to lawyer, was present last night, the group made plans to move out of the organizational stage and into the program implementation stage at its next meeting. The basis for this decisión wa„ a general desire to begin putting abstract ideas and concerns into effective action activities. Thus, as chairman William Pierce, a U-M law professor and director of the Legislative Research Center, indicated, the full committee will next week divide into smaller "task forces" concentrating on specific areas of drug abuse. It had previously been decided that these task force areas would be legal issues, treatment facilities, usage incidence and the open-ended area of "alternative activities." However, there was some talk of redefining these areas last night into more definite and concrete terms. Unive r s i t y undergraduates Robert Flowers and Vicki Lundgren, both representing part of the committee's student element, agreed that the primary focus of the group should be on the individual, whether he be a user or non-user, rather than the mass of society at large. Miss Lundgren stated that she could see the possibility of "healthy drug use," although Ann Arbor News Editor Arthur P. Gallagher debated this point with her, and Probate Court Judge F r a n c i s L . O'Brien explained that many juveniles now in the court's detention I home as runaways or I quents had gone wrong with the I help of drugs. During future meetings, the I committee hopes to get at the I meat of the drug problem as it I applies to Ann Arbor as a I whole, from the junior high I schools right up to the adult I community.