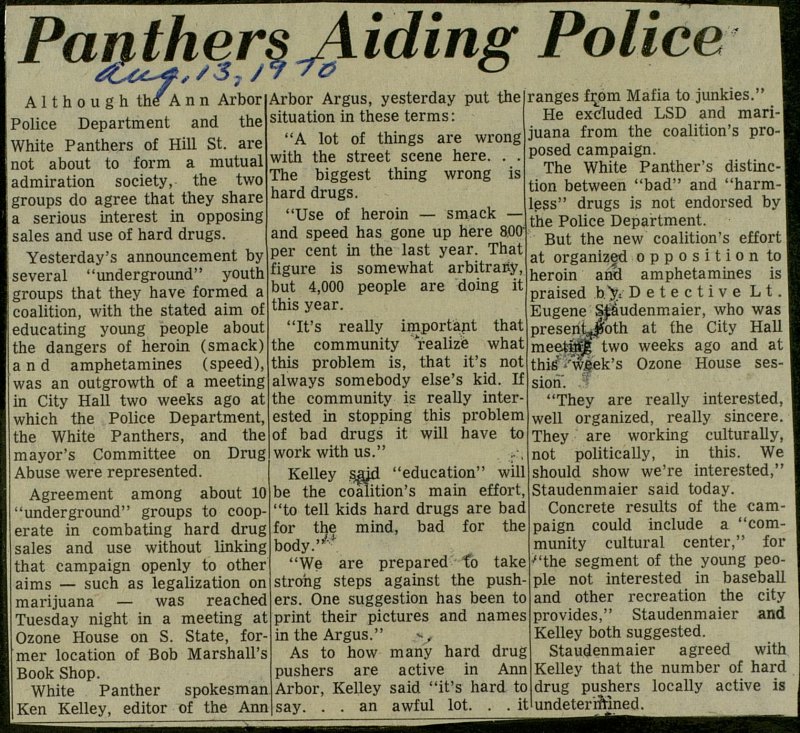 A 1 1 h o u g h thí A n n Arbor Pólice Department and the White Panthers of Hill St. are not about to form a mutual admiration society, the two groups do agree that they share a serious interest in opposing sales and use of hard drugs. Yesterday's announcement by several "underground" youth groups that they have formed a coalition, with the stated aim of educating young people about the dangers of heroin (smack) and amphetamines (speed), was an outgrowth of a meeting in City Hall two weeks ago at which the Pólice Department, the White Panthers, and the mayor's Committee on Drug Abuse were represented. Agreement among about 10 "underground" groups to cooperate in combating hard drug sales and use without linking that campaign openly to other aims - such as legalization on marijuana - was reachec Tuesday night in a meeting at Ozone House on S. State, for mer location of Bob Marshall's Book Shop. White Panther spokesman Ken Kelley, editor of the Ann Arbor Argus, yesterday put the situation in these terms: "A lot of things are wrong with the street scène here. . . Phe biggest thing wrong is ïard drugs. "Use of heroin - smack - and speed has gone up here 8.00 )er cent in the last year. That ïgure is somewhat arbitrañy, jut 4,000 people are doing it :his year. "It's really important that ;he community 'realizè what ;his problem is, that it's not always somebody else's kid. If the community is really interested in stopping this problem of bad drugs it will have to work with us." Kelley sad "education" will be the coalition's main effort, "to teil kids hard drugs are bad for the mind, bad for the body.1 "We are prepared fo take strohg steps against the pushers. One suggestion has been to print their pictures and names in the Argus." j , As to how many hard drug pushers are active in Ann Arbor, Kelley said "it's hard to say. . . an awful lot. . . i -anges from Mafia to junkies." ■■. He excluded LSD and mari-l uana from the coalition's pro-J josed campaign. j The White Panther's distinc-l ion between "bad" and "harm-J ess" drugs is not endorsed byl the Pólice Department. But the new coalition's effortl at organized opposition tol ïeroin an3 amphetamines is I Draised b.s Detective Lt. ïugene Staudenmaier, who was presentoth at the City Hall meetitfj' two weeks ago and at this úeek's Ozone House session. "They are really interested, well organized, really sincere. They are working culturally, not politically, in this. We should show we're interested," Staudenmaier said today. Concrete results of the campaign could include a "community cultural center," for ■'the segment of the young people not interested in baseball and other recreation the city provides," Staudenmaier and Kelley both suggested. Staudenmaier agreed with Kelley that the number of hard drug pushers locally active is undeteriMned.