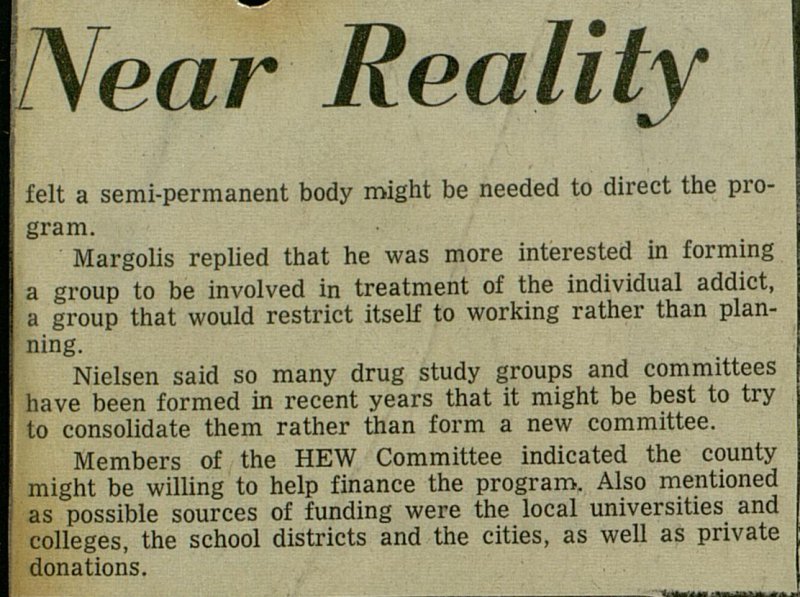 Calls for a local drug treatment program may soon be heeded by coromunity mental health officials, who said yesterday they hope to have a program of some type within two months. Dr. Philip Margolis, director of the Mental Health Clinic, told the county Health, Education and Welfare Committee his department is preparing a $200,000 federal grant request for a drug treatment center. He said the request would require $80,000 in local funds, at least some of which presumably could be in-kind, contributions of shelter and personnel. The grant request, if approved, would be enough to allow the drug facüity to treat 60 persons addicted to hard drugs, Dr. Margolis said. If the $80,000 is not available from local governmental and private organizations, however, the request and the treatment would have to be scaled down. If granted, the full program would be started next January. The doctor noted that the clinic is already helping a limited number of persons with problems with "soft drugs," such as marijuana, at its Ann Arbor and Ypsilanti clinics, and at the Huron Valley Child Guidance Clinic. He also said he has talked with 11 local agencies who say they are willing to cooperate with the drug treatment venture "to really hit this problem in a variety of ways." Dr. Margolis said the proposed treatment program would attack the drug problem in several ways, including the use of methodone, a drug substitute. The program would be set up much like the Crisis Clinic in that it would serve anyone who walked in off the street. Despite Dr. Margolis' hope that a program could begin two months, Cmsr. Bent F. Nielsen said the pressure and need for such a program is increasing, and asked ïf one could be going as soon as in two weeks. Margolis replied that too many preparations need to be made. He said that in dealir, with hard drugs it would be necessary to use medical personnel and facilities. In an effort to arrange for this, he said local hospitals are being contacted. Margolis said cooperation will also be needed from police agencies and a license is needed from the Food and Drug Administration to use methodone. _ Nielsen told Margolis he feels the county now has inherited the responsibility for seeing that something is done about the drug problem. He cited as one reason nothing has been done yet as the "inflexibility" of government. Nielsen also said he feit a semi-permanent body might be needed to direct the program. Margolis replied that he was more interested in forming a group to be involved in treatment of the individual addict, a group that would restrict itself to working rather than planning. Nielsen said so many drug study groups and committees have been formed in recent years that it might be best to try to consolidate them rather than form a new committee. Members of the HEW Committee indicated the county might be willing to help finance the program. Also mentioned as possible sources of funding were the local universities and colleges, the school districts and the cities, as well as private donations.