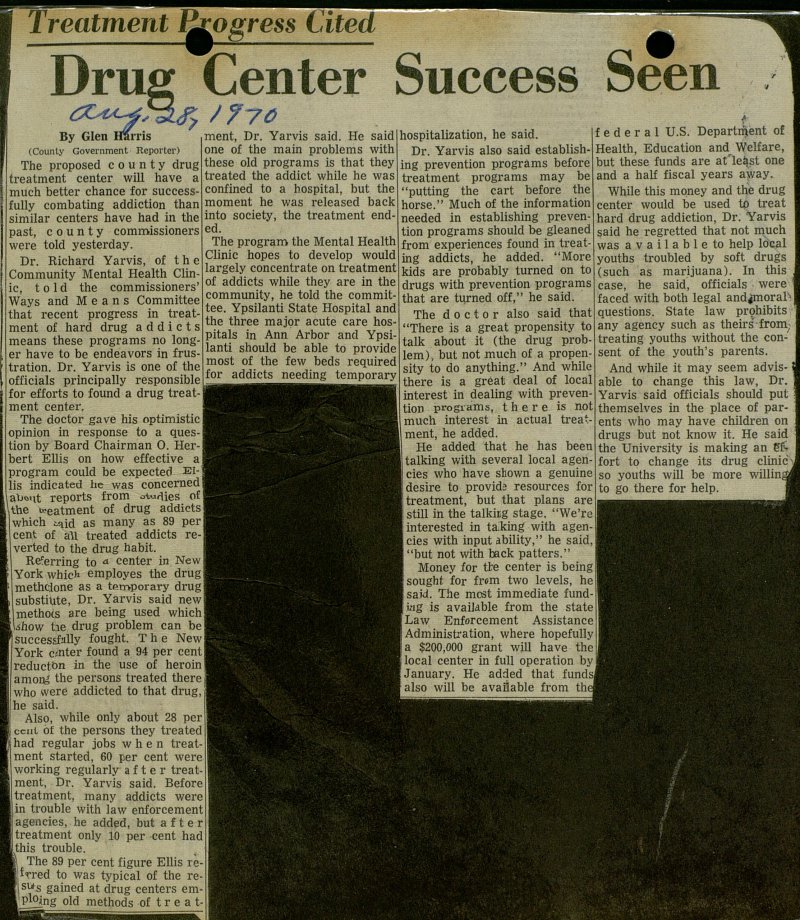 The proposed county drug treatment center will have a much better chance for successfully combating addiction than similar centers have had in the past, c o u n t y commissioners were told yesterday. Dr. Richard Yarvis, of t h e Community Mental Health Clinic, told the commissioners' Ways and Means Committee that recent progress in treatment of hard drug addicts means these programs no longer have to be endeavors in frustration. Dr. Yarvis is one of the officials principally responsible for efforts to found a drug treatment center. The doctor gave his optimistic opinion in response to a question by Board Chairman O. Herbert Ellis on how effective a program could be expected. Ellis indicated he was concerned about reports from studies of the treatment of drug addicts which said as many as 89 per cent of all treated addicts reverted to the drug habit. Referring to center in New York which employs the drug methadone as a temporary drug substitute, Dr. Yarvis said new methods are being used which show the drug problem can be successfully fought. The New York center found a 94 per cent reduction in the use of heroin among the persons treated there who were addicted to that drug, he said. Also, while only about 28 per cent of the persons they treated had regular jobs when treatment started, 60 per cent were working regularly after treatment, Dr. Yarvis said. Before treatment, many addicts were in trouble with law enforcement agencies, he added, but after treatment only 10 per cent had this trouble. The 89 per cent figure Ellis referred to was typical of the results gained at drug centers employing old methods of treatment, Dr. Yarvis said. He said one of the main problems with these old programs is that they treated the addict while he was confined to a hospital, but the moment he was released back into society, the treatment ended. The program the Mental Health Clinic hopes to develop would largely concentrate on treatment of addicts while they are in the community, he told the committee. Ypsilanti State Hospital and the three major acute care hospitals in Ann Arbor and Ypsilanti should be able to provide most of the few beds required for addicts needing temporary hospitalization, he said. Dr. Yarvis also said establishing prevention programs before treatment programs may be "putting the cart before the horse." Much of the information needed in establishing prevention programs should be gleaned from experiences found in treating addicts, he added. "More kids are probably turned on to drugs with prevention programs that are turned off," he said. The doctor also said that "There is a great propensity to talk about it (the drug problem), but not much of a propensity to do anything." And while there is a great deal of local interest in dealing with prevention programs, there is not much interest in actual treatment, he added. He added that he has been talking with several local agencies who have shown a genuine desire to provide resources for treatment, but that plans are still in the talking stage. "We're interested in talking with agencies with input ability," he said, "but not with back patters." Money for the center is being sought for from two levels, he said. The most immediate funding is available from the state Law Enforcement Assistance Administration, where hopefully a $200,000 grant will have the local center in full operation by January. He added that funds also will be available from the federal U.S. Department of Health, Education and Welfare, but these funds are one and a half fiscal years away. While this money and the drug center would be used to treat hard drug addiction, Dr. Yarvis said he regretted that not much was available to help local youths troubled by soft drugs (such as marijuana). In this case, he said, officials were faced with both legal and moral questions. State law prohibits any agency such as theirs from. treating youths without the consent of the youth's parents. And while it may seem advisable to change this law, Dr. Yarvis said officials should put themselves in the place of parents who may have children on drugs but not know it. He said the University is making an effort to change its drug clinics so youths will be more willing to go there for help.