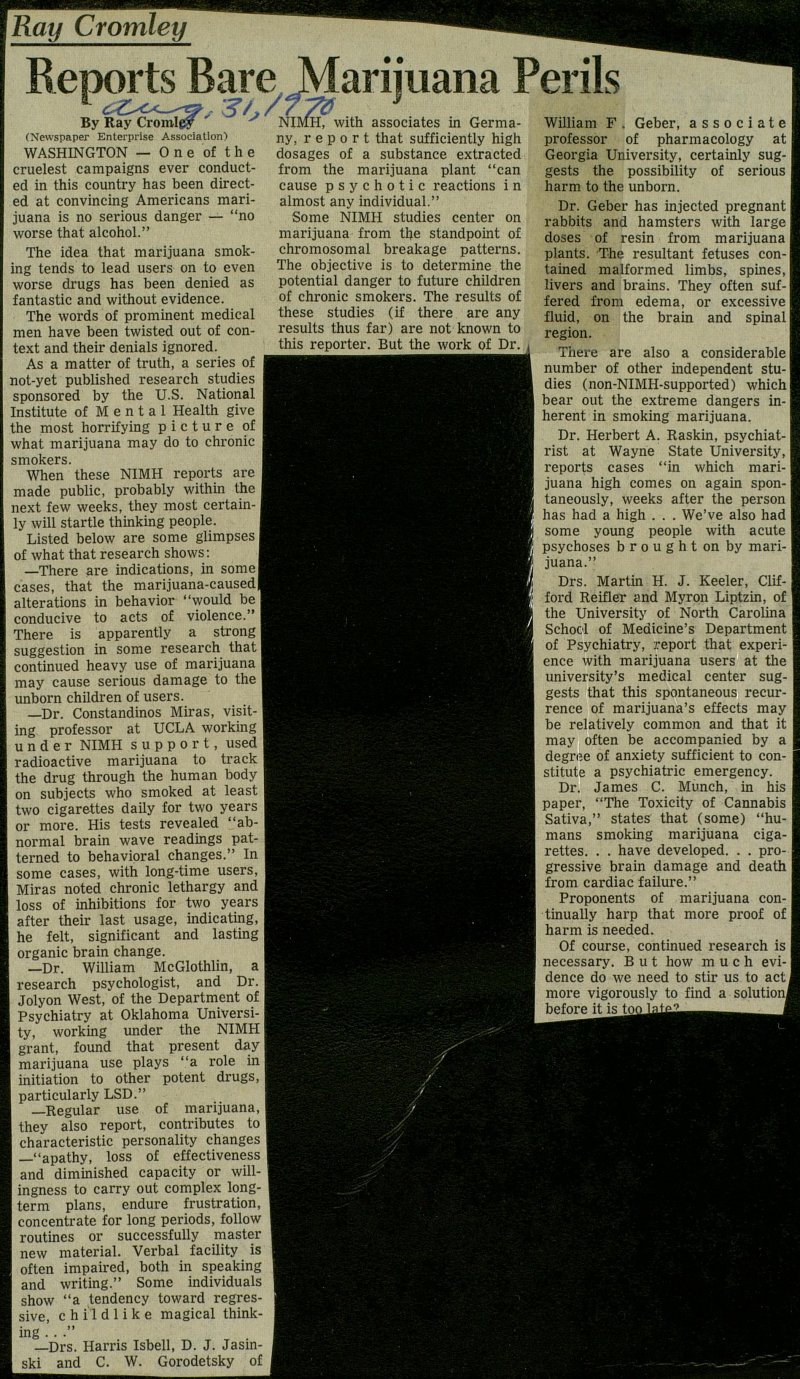 WASHINGTON - One of the cruelest campaigns ever conducted in this country has been directed at convincing Americans marijuana is no serious danger - "no worse that alcohol." The idea that marijuana smoking tends to lead users on to even worse drugs has been denied as fantastic and without evidence. The words of prominent medical men have been twisted out of context and their denials ignored. As a matter of truth, a series of I not-yet published research studies sponsored by the U.S. National Institute of Mental Health give the most horrifying picture of what marijuana may do to chronic smokers. When these NIMH reports are made public, probably within the I next few weeks, they most 1 ly will startle thinking people. : Listed below are some glimpsesl of what that research shows: j - There are indications, in somel cases, that the marijuana-causedl alterations in behavior "would be I conducive to acts of violence." E There is apparently a strong I suggestion in some research thatl continued heavy use of marijuana I may cause serious damage to the I unborn children of users. ■ -Dr. Constandinos Miras, visiting professor at UCLA working u n d e r NIMH support, used radioactive marijuana to track the drug through the human body on subjects who smoked at least two cigarettes daily for two years or more. His tests revealed "abnormal brain wave readings patterned to behavioral changes." In some cases, with long-time users, Miras noted chronic lethargy and loss of inhibitions for two years after their last usage, indicating, he feit, significant and lasting organic brain change. -Dr. William McGlothlin, a research psychologist, and Dr. Jolyon West, of the Department of Psychiatry at Oklahoma University, working under the NIMH grant, found that present day marijuana use plays "a role in initiation to other potent drugs, particularly LSD." -Regular use of marijuana, they also report, contributes to characteristic personality changes - "apathy, loss of effectiveness and diminished capacity or willingness to carry out complex longterm plans, endure frustration, concéntrate for long periods, follow routines or successfully master new material. Verbal facility is often impaired, both in speaking and writing." Some individuals show "a tendency toward regressive c h il d 1 i k e magical thinking .. ." -Drs. Harris Isbell, D. J. Jasinski and C. W. Gorodetsky of NIMH, with associates in Gertnany, report that sufficiently high dosages of a substance extracted f rom the marijuana plant "can cause psychotic reactions i n almost any individual." Some NIMH studies center on marijuana from the standpoint of chromosomal breakage patterns. The objective is to determine the potential danger to future children of chronic smokers. The results of these studies (if there are any results thus f ar) are not known to this reporter. But the work of Dr. , William F . Geber, associate professor of pharmacology at Georgia University, certainly suggests the possibility of serious harm to the unborn. Dr. Geber has injected pregnant rabbits and hamsters with large doses of resin from marijuana plants. The resultant fetuses contained malformed limbs, spines, livers and brains. They often suffered from edema, or excessive fluid, on the brain and spinal región. There are also a considerable number of other independent studies (non-NIMH-supported) which bear out the extreme dangers inherent in smoking marijuana. Dr. Herbert A. Raskin, psychiatrist at Wayne State University, reports cases "in which marijuana high comes on again 1 taneously, weeks after the person has had a high . . . We've also had some young people with acute psychoses broughtonby marijuana." Drs. Martin H. J. Keeler, Clifford Reifler and Myron Liptzin, of the University of North Carolina School of Medicine's Department of Psychiatry, report that experience with marijuana users at the university's medical center suggests that this spontaneous recurrence of marijuana's effects may be relatively common and that it may often be accompanied by a degree of anxiety sufficient to constitute a psychiatrie emergency. Dr. James C. Munch, in his paper, "The Toxicity of Cannabis Sativa," states that (some) "humans smoking marijuana cigarettes. . . have developed. . . progressive brain damage and death from cardiac failure." Proponents of marijuana continually harp that more proof of harm is needed. Of course, continued research is necessary. B u t how m u c h evidence do we need to stir us to act] more vigorously to find a solutioni before it '= tno lattf- 1