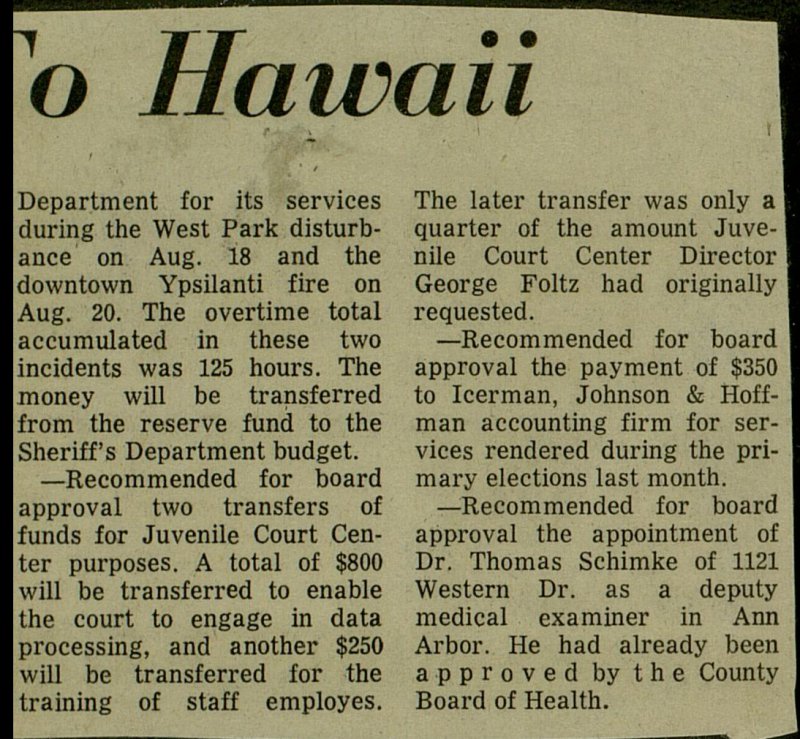 Sheriff Douglas J. Btaryey will be bound for Hawaii nexi month to attend a week-lnng International Narcotics Enfo rcement Conference which will serve as a prelude to his announced creation next year of a county-wide "nare squad." Harvey will be accompanied by his chief of detectives, Capt. Stanton Bordine, to the conference at a total cost of about $838. Both Bordine, who is to head the narcotics squad in Washtenaw County, and Harvey are graduates of a federa 1 narcotics investigation - 4 school in Washington, D.C. Only graduatess of this school were invited to attend the conference, being held in Honolulú from Oct. 18-25. Approval of the trip was recommended yesterday by the Board of County Commissioners' Ways and Means Committee following some debate among commissioners on how much the conference would benefit Washtenaw County. Cmsr. William Lands oí Ann Arbor, in an earlier Law Enforcement Committee meeting, questioned whether the conference is "for pol or for Washtenaw County.." He later stated that he was skeptical of the financial wisdom of sending two men when "it would seem that one would be sufficient to bring back the necessary information." After a short secret session in the hallway between Cmsrs. Lands and Donald Edmonds of Ypsilanti, Lands seemed to soften his stand on the matter and called sending the men "a gamble" in regard to what they might bring back of value to the county's efforts to combat the use of narcotics. He stressed, however, that no "secret factors" were involved in making a decisión on allowing the men to attend the conference. Harvey was present at the beginning of the Ways and Means Committee meeting at the request of some commissioners who desired further information on the conference and the costs involved before recommending any action to the board as a whole. The full board acts as the Ways and Means Committee. Previ o u s 1 y, Undersheriff Harold Owings had raised the possibility that an appropriation of approximately $500 beyond those funds contained in the Sheriff Department's budget for travel and training expenses might be needed to help finance the trip. Harvey, however, said that additional money was not necessary to pay for the trip and that the $838 - at $419 per man - could be paid solely out of the travel and training fund. The sheriff assured Lands no training of deputies in his department was being postponed by using the money from the fund for the ence. He also said that two men attending will be extremely beneficial to the county with the proposed introduction next year of the special narcotics squad. Part of the subject matter scheduled to be discussed at the conference, Harvey said, concerns methods of dealing with illegal drug traffic; knowledge which could be employed by the squad. In other action yesterday, the committee: - Recommended for approval by the board a total of $822.37 in emergency overtime pay to the Sheriff's Department for its services during the West Park disturbance on Aug. 18 and the downtown Ypsilanti fire on Aug. 20. The overtime total accumulated in these two incidents was 125 hours. The money will be transferred from the reserve fund to the Sheriff's Department budget. - Recommended for board approval two transfers of funds for Juvenile Court Center purposes. A total of $800 will be transferred to enable the court to engage in data processing, and another $250 will be transferred for the training of staff employés. The later transfer was only a quarter of the amount Juvenile Court Center Director George Foltz had originally requested. - Recommended for board approval the payment of $350 to Icerman, Johnson & Hoffman accounting firm for services rendered during the primary elections last month. -Recommended for board approval the appointment of Dr. Thomas Schimke of 1121 Western Dr. as a deputy medical examiner in Ann Arbor. He had already been approved by the County Board of Health.