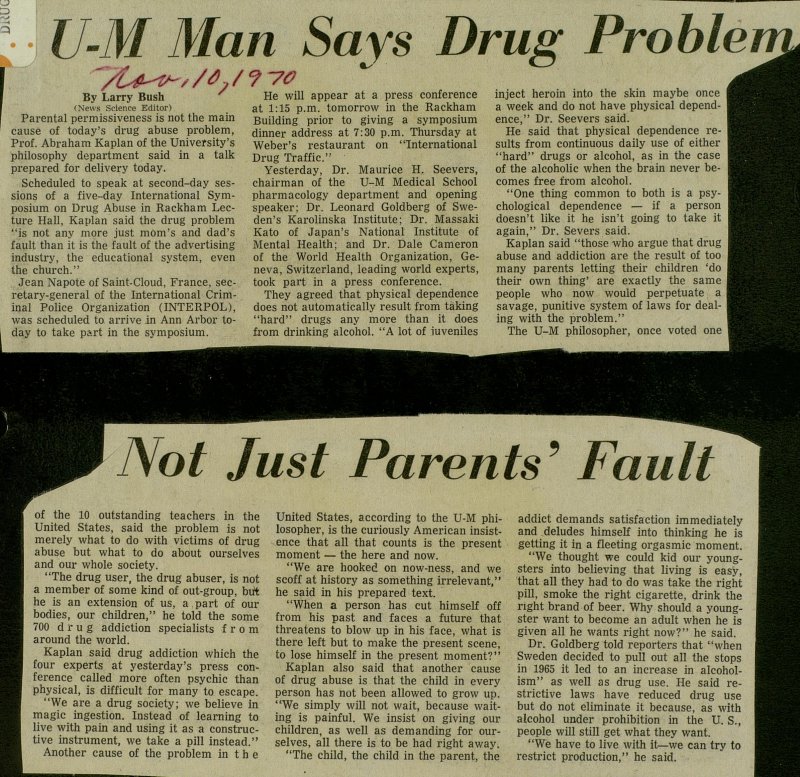 Parental permissiveness is not the main cause of today's drug abuse problem, Prof. Abraham Kaplan of the University's philosophy department said in a talk prepared for delivery today. Scheduled to speak at second-day sessions of a five-day International Symposium on Drug Abuse in Rackham Lecture Hall, Kaplan said the drug problem "is not any more just mom's and dad's fault than it is the fault of the advertising industry, the educational system, even the church." Jean Napote of Saint-Cloud, France, secretary-general of the International Criminal Pólice Organization (INTERPOL), was scheduled to arrive in Ann Arbor today to take psrt in the symposium. He will appear at a press conference at 1:15 p.m. tomorrow in the Rackham Building prior to giving a symposium dinner address at 7:30 p.m. Thursday at Weber's restaurant on "International Drug Traffic." Yesterday, Dr. Maurice H. Seevers, chairman of the U-M Medical School pharmacology department and opening speaker; Dr. Leonard Goldberg of Sweden's Karolinska Institute; Dr. Massaki Kato of Japan's National Institute of Mental Health; and Dr. Dale Cameron of the World Health Organization, Geneva, Switzerland, leading world experts, took part in a press conference. They agreed that physical dependence does not automatically result from taking "hard" drugs any more than it does from drinking alcohol. "A lot of iuveniles inject heroin into the skin maybe once I a week and do not have physical I ence," Dr. Seevers said. He said that physical dependence results from continuous daily use of either "hard" drugs or alcohol, as in the case of the alcoholic whea the brain never becomes free from alcohol. "One thing common to both is a psychological dependence - if a person doesn't like it he isn't going to take it again," Dr. Severs said. Kaplan said "those who argue that drug abuse and addiction are the result of too many parents letting their children 'do their own thing' are exactly the same people who now would perpetúate a savage, punitive system of laws for 1 ing with the problem." The U-M philosopher, once voted one of the 10 outstanding teachers in the United States, said the problem is not merely what to do with victims of drug abuse but what to do about ourselves and our whole society. "The drug user, the drug abuser, is not a member of some kind of out-group, birt he is an extensión of us, a part of our bodies, our children," he told the some 700 drug addiction specialists f r o m around the world. Kaplan said drug addiction which the four experts at yesterday's press conference called more often psychic than physical, is difficult for many to escape. "We are a drug society; we believe in magie ingestión. Instead of learning to live with pain and using it as a constructive instrument, we take a pill instead." Another cause of the problem in t h e United States, according to the U-M philosopher, is the curiously American insistence that all that counts is the present moment - the here and now. "We are hooked on now-ness, and we scoff at history as something irrelevant," he said in his prepared text. "When a person has eut himself off from his past and faces a future that threatens to blow up in his face, what is there left but to make the present scène, to lose himself in the present moment?" Kaplan also said that another cause of drug abuse is that the child in every person has not been allowed to grow up. "We simply will not wait, because waiting is painful. We insist on giving our children, as well as demanding for ourselves, all there is to be had right away. "The child, the child in the parent, the addict demands satisfaction immediately and deludes himself into thinking he is getting it in a fleeting orgasmic moment. "We thought we could kid our youngsters into believing that living is easy, that all they had to do was take the right pill, smoke the right cigarette, drink the right brand of beer. Why should a youngster want to become an adult when he is given all he wants right now?" he said. Dr. Goldberg told reporters that "when Sweden decided to pull out all the stops in 1965 it led to an increase in alcoholism" as well as drug use. He said restrictive laws have reduced drug use but do not elimínate it because, as with alcohol under prohibition in the U. S., people will still get what they want. "We have to live with it- we can try to restrict production," he said.