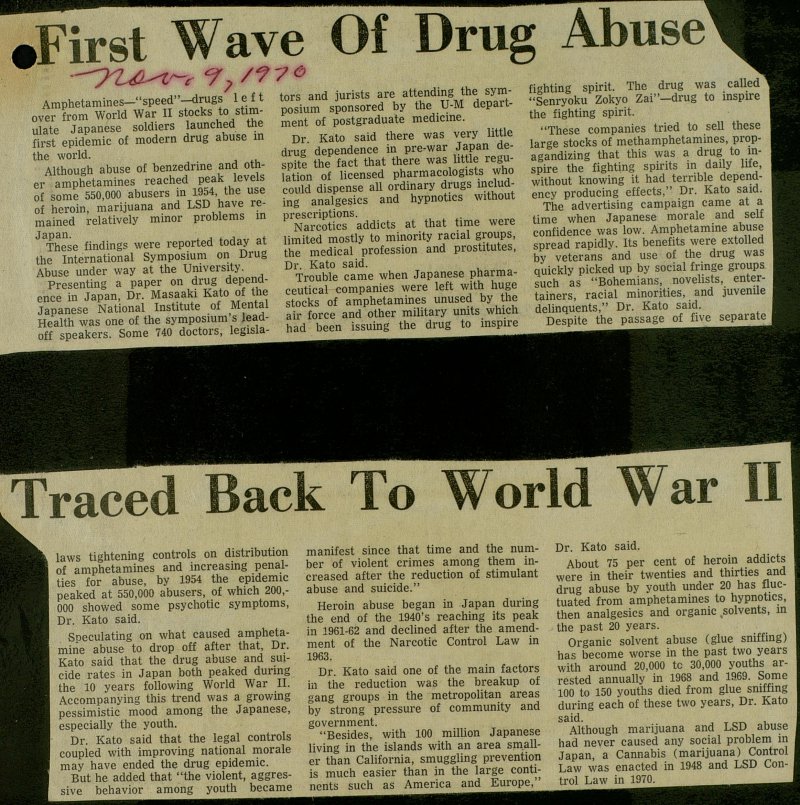 Amphetamines-"speed"-drugs 1eft over from World War II stocks tostimulate Japanese soldiers launched the first epidemic of modern drug abuse m the world. Although abuse of benzedrine and otter amphetamines reached peak levels of some 550,000 abusers in 1954 the use of heroin, marijuana and LSD have remained relatively minor problems in Japan. These findings were reported today at the International Symposium on Drug Abuse under way at the University. Presenting a paper on drug dependence in Japan, Dr. Masaaki Kato of the Jananese National Institute of Mental Health was one of the symposium's leadoff speakers. Some 740 doctors, tors and jurists are attending the symposium sponsored by the U-M department of postgraduate medicine. Dr Kato said there was very little drug dependence in pre-war Japan despite the fact that there was little regulation of licensed pharmacologists who could dispense all ordinary drugs including analgesics and hypnotics without prescriptions. Narcotics addicts at that time were limited mostly to minority racial groups, the medical profession and prostitutes, Dr. Kato said. Trouble came when Japanese pharmaceutical companies were left with huge stocks of amphetamines unused by the air force and other military units which had been issuing the drug to inspire fighting spirit. The drug was called "Senryoku Zokyo Zai"- drug to inspire the fighting spirit. "These companies tried to sell these large stocks of methamphetamines, propagandizing that this was a drug to inspire the fighting spirits in daiy life, without knowing it had terrible dependency producing effects," Dr. Kato said. The advertising campaign came at a time when Japanese morale and seK confidence was low. Amphetamine abuse spread rapidly. lts benefits were extolled by veterans and use of the drug was quickly picked up by social fringe groups such as "Bohemians, novelists, entertainers, racial minorities, and juvenile delinquents," Dr. Kato said. Despite the passage of five separate laws tightening controls on distribution of amphetamines and increasing penalties for abuse, by 1954 the epidemic peaked at 550,000 abusers, of which 200,000 showed some psychotic symptoms, Dr. Kato said. Speculating on what caused amphetamiñe abuse to drop off after that, Dr. Kato said that the drug abuse and suicide rates in Japan both peaked during the 10 years following World War II. Accompanying this trend was a growing pessimistic mood among the Japanese, especially the youth. Dr. Kato said that the legal controls coupled with improving national morale may have ended the drug epidemic. But he added that "the violent, aggressive behavior among youth became manifest since that time and the number of violent crimes among them increased after the reduction of stimulant abuse and suicide." Heroin abuse began in Japan during the end of the 1940's reaching its peak in 1961-62 and declined after the amendment of the Narcotic Control Law in 1963. Dr. Kato said one of the main factors in the reduction was the breakup of gang groups in the metropolitan areas by strong pressure of community and government. "Besides, with 100 million Japanese living in the islands with an area smaller than California, smuggling prevention is much easier than in the large continents such as America and Europe," Dr. Kato said. About 75 per cent of heroin addicts were in their twenties and thirties and drug abuse by youth under 20 has fluctuated from amphetamines to hypnotics, then analgesics and organic ,solvents, in the past 20 years. Organic solvent abuse (glue sniffing) has become worse in the past two years with around 20,000 te 30,000 youths arrested annually in 1968 and 1969. Some 100 to 150 youths died from glue sniffing during each of these two years, Dr. Kato said. Although marijuana and LSD abuse had never caused any social problem in Japan, a Cannabis (marijuana) Control Law was enacted in 1948 and LSD Control Law in 1970.